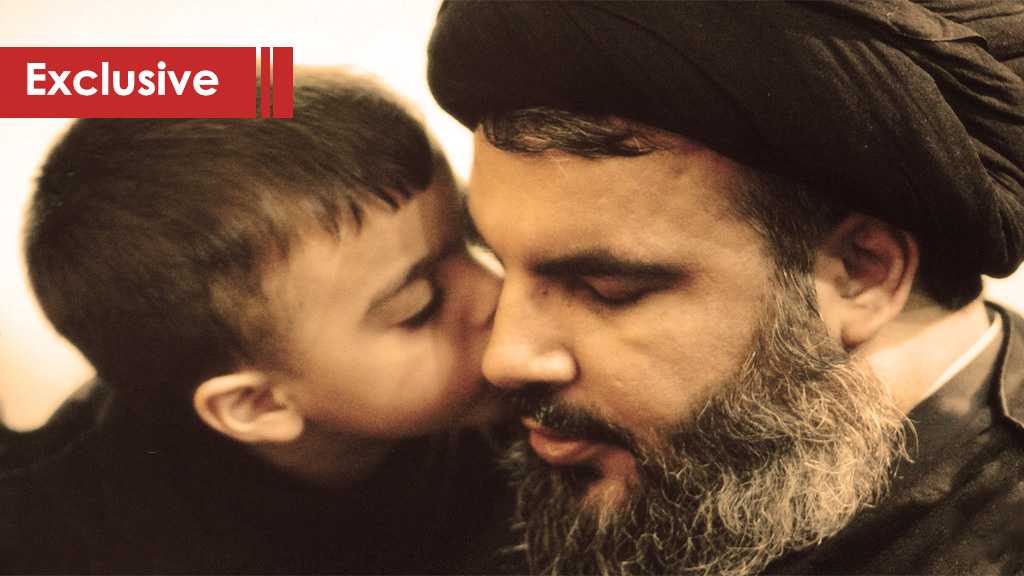 On the sidelines of a conference on women’s status in Islam, al-Ahed news interviewed the daughter of Hezbollah Secretary General, His Eminence Sayyed Hassan Nasrallah. Zainab Nasrallah, a 33 year-old mother of four children came to Tehran to take part in a conference on the status and role of women in Islamic thought.

I spent a day with the poise and livelily lady who has high self-esteem, keeps a smile on her face and is modest and loving. We spoke a lot about childhood memories, her opinion on the status of women in Islamic thought, how she does her own shopping and lives a normal life back home. No need for Limousines and escorts, or maids and drivers. Her eyes glowed every time she mentioned her father.

Zainab, the mother of two girls and two boys holds a degree in social sciences and another in Islamic studies. She married at a young age, and her loving husband supported her with the kids and chores so that she would eventually get her degrees and finish her education. Zainab, who is married to a supportive and understanding husband, said that she always wanted to marry a man in the resistance forces and her wish came true.

Asked on the memories she has from her childhood and the days she lived with her parents, Zainab said “All the memories that we had together before the (2006) July war were pretty and everlasting memories. I could easily go to my parent’s house and have dinner or lunch with them.

One of the sweetest memories I keep is during the mourning days of Ashoura. We would come back home together from the mourning ceremonies, sit at the dining table and mom would bring us yogurt drink because the weather would be hot at that time of the year. We would drink yogurt and talk while sitting at the table.”

After the 2006 July war things changed for the Nasrallah family. Due to security measures, the family cannot gather easily like before, but all members of the family understand that and they are happy to sacrifice for the sake of the resistance and the people.

“When I was young I was very attached to my father. I would cry sometimes because I missed him,” Zainab said with a big smile on her face. “I am proud that he is my father, he makes me delighted. His position as the Secretary General of Hezbollah has deprived me and my siblings from many moments and things that I would have liked to experience with him as a father. Every decision has its consequences usually, and I believe that no matter how tough the consequences of being the leader of Hezbollah on my father and our family life are, we always understand. The only tough part for us is that we miss him but we are grateful that he has been able to fulfil his duties.”

Hezbollah Secretary General is a loving grandfather. “When we see him, my children, my nephews and nieces all race to sit next to him. So you find the very young grandchildren, one sitting in his lap, another on his shoulder and so on. They make a lot of noise and they start competing who will sit next to him. He always tells us let the kids do what they want, and if they become too noisy he does not allow us to silence them. He is careful that they are happy and comfortable when around him. He follows up on the matters of the elder children, he discusses things with them and they consult him a lot on their lives. They are attached to him.”

Zainab told me how “He definitely misses his family members, and would love to see them and spend more time with them. However, he adapts to the situation and we all understand that it is our duty to accept the situation. Many do not believe that we see him sometimes only a few times every year, but this is true. Some think that it is too much to tolerate. I tell them it is not easy, especially that I am his daughter and I have a special relationship with him. But keep in mind that he does all these sacrifices and he does not only belong to us but rather to all the Islamic Ummah. We are not upset, and this only makes us stronger because we understand how important our cause is.”

Sayyed Nasrallah in her Eyes

When I asked Zainab on how she views her father, she said “I see him as a father and a leader simultaneously. I abide by his words and advices, whether as a father or when he addresses the public and urges them to do something. I always listen to him and obey him. Not only that, I am always careful to please him and I understand that I am a role model to many, especially the youth and hence I listen to his advice and I know he always speaks logic.”

However, when it comes to the revolution or the resistance, I see her father more like as her leader. “He has this strong impact on the public opinion, and I am part of this public opinion. I listen to his speeches and lectures which allows me to understand politics, and I do not see him only as a father but as a leader too.”

I was showering her with questions and she was answering without any hesitation. She was very outgoing and comfortable. Asking her what would be an important thing she has learned from her father who is highly thought of by hundreds of thousands if not millions across the world, she said “I have learned many lessons from my father, but I would say the biggest lesson I have learned from him is that one should be modest while enjoying a strong personality. He is very modest, and I love that about him. This trait, in my opinion, is also what makes people think highly of him. He feels with the people, and he equates himself to the people of his society. I always try to be modest like him and pass on this trait to my children and loved ones.”

Many claim that Sayyed Nasrallah and his family live a luxurious life and are inconsiderate of the people around them. “If I want to describe my life, I would say it is a middle-class life. We do not have a luxurious life but we are also not poor. Of course, what I mean by “we” here is my husband, kids and I since we are independent and have a separate life from my parents’, and my husband is the one supporting our little family. Our financial status is not related to my father at all, and his position has zero effect on this issue.”

Touching on the importance of feeling and living with others, Zainab further explained to me “We live a normal life and even if we had the capability to afford a luxurious life we would not do that because we feel with the people and see it as an obligation to keep a standard of living as that of our own society. We live with the people, and we care for others’ feelings which are a duty in our eyes.”

Now explaining how her father lives, she went on to explain that “Sayyed Nasrallah likes keeping life simple. He lives a decent life, and no, he does not live as if in a prison and he is not deprived of anything. There are security measures, and we do not visit him at his place we meet elsewhere. But he is not in hide and does not live in a prison like media outlets claim.”

Hadi and his martyrdom

The daughter of the resistance leader said that after her brother Hadi was martyred, he left a big gap behind, he was a unique person.

“He was very modest and loving and would always help out others. He was very polite and caring with my parents and he would never do anything that would bother them. I was 12 years old when he was martyred. One time, he came back from a work trip in the middle of the night, I heard his voice so I woke up and rushed into the room and I hugged and kissed him. He had bought me a gift; a musical box that has a pretty mirror. I still keep it until today.”

She explained that “Our culture and beliefs allow us to be patient and soothe us when we talk about martyrdom. This does not change the fact that I miss my brother, and I long to see him, we are human beings. But our beliefs help us deal with the situation; he and the martyrs are in a better place. I still remember that day when I was told that my brother Hadi was martyred. We had guests come over; a group of friends who came to break the news and tell us he was martyred. I remember well I was helping my mom with the laundry on that day. One of the ladies took me aside and told me that my brother was martyred in the battles with the Zionist enemy. My eyes became watery right away but I did not cry. To my surprise, when they told my mom, she stood firm and did not show any reaction. We all miss him, but his martyrdom only made us grow stronger. We cry maybe or express longing, each on our own, but never in public. We talk about him; we remember his traits and recall stories that happened.”