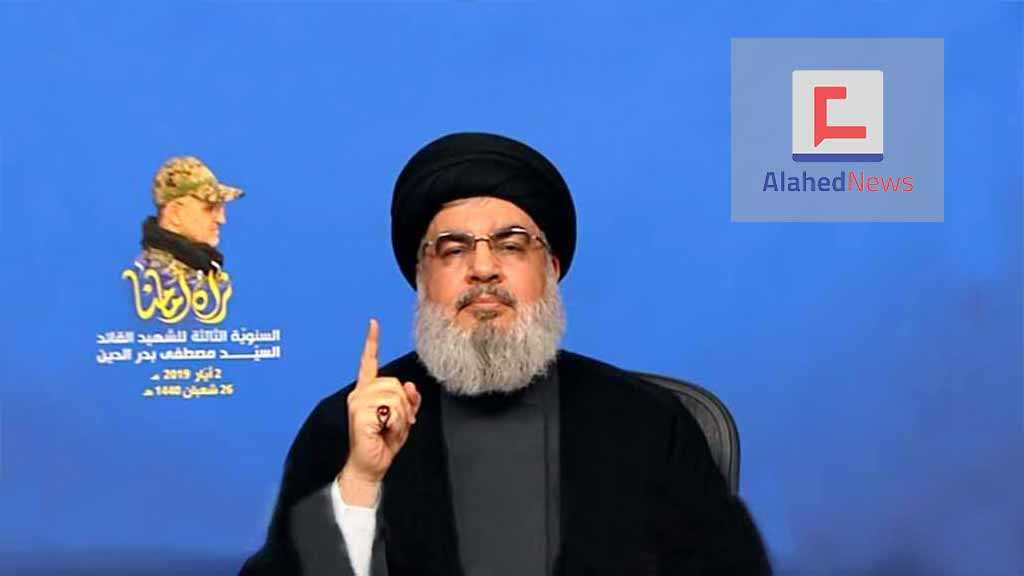 He further  congratulated the Lebanese workers on Labor Day.

On the occasion, His Eminence recalled that “Sayyed Badreddine belongs to the first generation of resistance fighters.”

“Among the characteristics of leader Badreddine and his generation is that they were able to manufacture human capabilities from very few possibilities,” he said, noting that “we are talking  about a young man who turned to be a Resistance leader.”

In this context, Sayyed Nasrallah praised the fact that “there are young people who shoulder the responsibility that Palestine is occupied and that there exists American hegemony in our region.”

“These young people held the responsibility and were concerned to face the aggression, arrogance and tyranny, “ he added, pointing out that “some people are surprised by the resistance’s concerns when things are related to the homeland, the nation’s issues and what is happening in our region.”

In parallel, His Eminence hailed the resistance, martyr Badreddine and his brothers who rejected the culture of isolation from the issues of their homeland and nation.

Back to the Hezbollah’s 1997  Ansaryiah, Sayyed Nasrallah revealed that “from the achievements of Sayyed Badreddine is his mastery in Ansaryiah operation.”

Detailing some of the operation’s facts, Sayyed Nasrallah reminded that “the information of Ansaryiah was taken after the monitoring of the “Israeli” force.  All this information was discussed and it was found that we must prepare for a very large operation.”

“Martyr Badreddine visited Ansaryiah and studied the area to develop the plan for the ambush. He stayed for days and nights preparing for a preventive operation,” he stressed.

Similarly, His Eminence underscored that “Martyr Badreddine worked with a great mastery when he went to Syria.”

Commenting on the recent talk of an imminent “Israeli” war on Lebanon, Sayyed Nasrallah emphasized that “The Lebanese mustn’t allow anyone to frighten them by a psychological war. Lebanon is strong and has real power.”

“The talk of an imminent “Israeli” war on Lebanon is aimed to pressure the Lebanese state to surrender and offer concessions. The US is seeking Lebanese concessions on the issue of the territorial and maritime borders and the Shebaa Farms for the benefit of the “Israeli” enemy. It is also seeking concessions regarding Lebanon's elements of strength, including the resistance and its missiles” His Eminence mentioned, pointing out that “There is an atmosphere that the American, some European and Gulf countries are trying to spread by talking in exaggeration of the “Israeli” war on Lebanon.”

In response, the Resistance Leader urged the Lebanese not to fear anyone. “If “Israel” wants a war, let it come and the era of its short war and victory is over. Hezbollah remains fairly capable and utterly determined irrespective of sanctions imposed on it. The “Israeli” entity fears launching a new war, even on the besieged Gaza Strip, let alone Lebanon.”

To the “Israeli” apartheid entity and its military institutions, Sayyed Nasrallah sent a sounding message: “I will not talk about the resistance and ammonia in Haifa and something else that has emerged there. It is enough to target it with one missile to get more effect than targeting the ammonia.”

“All this threatening campaign is because the rockets of the resistance forms a problem for “Israel”,” he said, pointing out that “Lebanon and the resistance in Lebanon have been subjected to intimidation campaign regarding Lebanon's maritime and land borders as well as regarding Shebaa Farms and Lebanon's power represented by the army-resistance-people equation. The “Israeli” is aware that Hezbollah can invade the Galilee.”

In a clear message, Hezbollah Secretary General said: “I reiterate to you my firm and honest pledge that the “Israeli” brigades that will enter Lebanon will be destroyed under the eyes of international television screens and the entire world. We will not compromise on even one iota of the Lebanese soil."

“Those who change their position regarding the Lebanese sovereignty on Shebaa farms won't make any difference because their stance is worthless,” he added, noting that “Lebanese territory is determined by the state and not by a particular party.”

Meanwhile, Sayyed Nasrallah announced that “the resistance is ready to liberate and defend any Lebanese land determined by the state.”

Once again, he affirmed that Hezbollah believes that “the Seven Villages are Lebanese, but we never said that we will fight for them in defiance of the Lebanese government's wishes.”

“For us, the seven villages whether Lebanese or Palestinian are occupied,” His Eminence mentioned.

Moving to the Syrian arena, he reiterated that “day after day, we’re sure of the correct decision to go to Syria.”

Regarding the regional scene, His Eminence viewed that “Daesh [The Arabic Acronym for the terrorist “ISIS/ ISIL” group was manufactured and made by the US in a bid to stand against all those who confront the US-“Israeli” scheme in the region and that's what US officials themselves had said. One of the main objectives of the West in this regard was to defeat Hezbollah.”

Sayyed Nasrallah further warned that “now, Daesh was the excuse for American troops to enter Iraq, and their excuse for remaining in Iraq. Daesh still has a role to play in the American scheme.”

“How did Daesh come and manage to occupy 45% of Syria and half of Iraq? Who supported Daesh by the money and arms in Syria and Iraq?” he warned, stating that “what happened in Syria was a multifaceted scheme, and not a change for democracy.”

According to His Eminence highlighted that “Saudi Arabia and Wahhabism are the ones that produced Daesh. In their beliefs, the elections and those who vote in the ballot box are infidels.”

Advising the Iraqis to be aware that [US President] “Donald Trump considers Iraqi oil his own and wants it,” he cautioned that “Trump is implementing everything he talked about in his electoral campaign, particularly taking the Iraqi oil.”

“Daesh’s caliphate has ended but its cells exist and will be activated in Syria and Iraq,” the Resistance Leader warned, noting that “Daesh has been defeated, but it carried achievements for America and “Israel”. It still represents an undeniable threat.”

According to His Eminence, Daesh has a job in Afghanistan to kill this people and move towards Central Asia. Daesh must be confronted at all levels culturally, intellectually and militarily. Daesh still represents a threat to Lebanon and we must remain alerted. Daesh has served US, “Israel” and other enemies to our nation, it has destroyed several armies and societies. The terrorist group still remains a threat as its ideology persists and its sleeper cells can be resurrected.”

On another level, Sayyed Nasrallah called for confronting and condemning “the bloody US-Saudi alliance.”

He also lamented that “the UN says that the Saudi- American war on Yemen has till now caused 250,000 casualties. But no one said anything, because the butcher is the US and the Saudi. Saudi Arabia has executed young Saudis, including a religious scholar and elites, and no one has faced it.

“How Saudi Arabia was allowed to get away with executing citizens, including minors, for just participating in a protest? Isn’t it because of money?” he asked.

“Saudi Arabia's allies in Lebanon attack me when I criticize Riyadh, but they are totally silent in the face of Trump's insults against their kingdom and king,” he added, noting that “we can't trust the Americans to be honest brokers, for they have adopted “Israel's” interests above the entire world.”

On the same level, Sayyed Nasrallah underscored that “the $450 billion which Trump said he has taken from Saudi Arabia is for the Muslims and Al-Saud has no right to give them to US.”

“Pompeo admitted to lying, deception, and thievery when he was director of the CIA,” he said.

Regarding the situation, Sayyed Nasrallah said: “If citizens in Sudan do not act consciously, we do not know where things go.”

On the internal Lebanese arena, he stressed that “if we resort to media talk and overbidding, it will be difficult to reach a state budget, and I call for keeping debate inside the Council of Ministers. Lebanese banks must contribute to the solution regarding the financial crisis and debt interest and this is the least national duty they can do.”