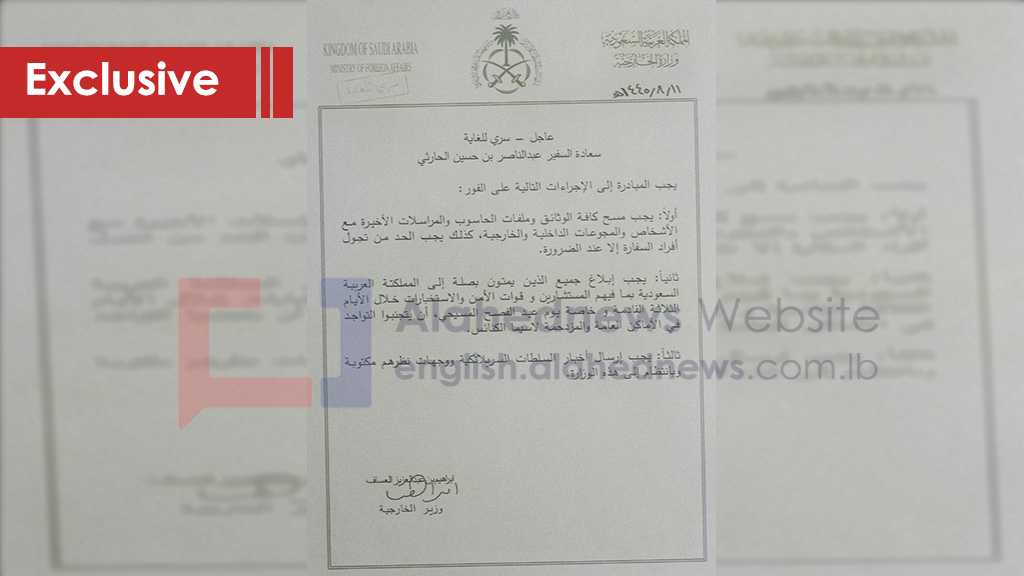 In a leaked ‘urgent, confidential and top secret’ document, the Saudi Arabian Ministry of Foreign Affairs confesses responsibility or at least ‘relation’ to the terrorist attacks that hit Sri Lanka two weeks ago as Christians celebrated Easter Sunday.

Obtained by al-Ahed, the paper, which carries the Hijri date of 11/8/1440, the day equivalent to April 16, 2019, some five days that preceded the massacre, was tailed by the Saudi Foreign Minister Ibrahim bin Abdul Aziz al-Assaf’s signature. It is a letter sent to Saudi Ambassador to Sri Lanka, Abdul Nasser al-Harethi.

The document reads the following:

You should carry out the following measures immediately:

First: You should delete all documents, computer data and latest correspondence with domestic and foreign members and groups, in addition to imposing a curfew for the embassy personnel unless it is necessary

Second:  You should inform all those related to the Kingdom of Saudi Arabia including counselors, security forces and intelligence during the three coming days, especially on the Christian Easter Day, to avoid presence in public and crowded places namely churches

Third: You should send written news about the Sri Lankan authorities and their viewpoints regularly to this ministry

It was on April 21st, 2019 -coinciding Easter Sunday- that three Christian churches in Sri Lanka and three luxury hotels in the commercial capital Colombo were targeted in a series of coordinated terrorist suicide bombings.

Later that day, there were smaller explosions at a housing complex in Dematagoda and a guest house in Dehiwala. 253 people were martyred, including at least 42 foreign nationals and three police officers, and at least 500 others were injured.