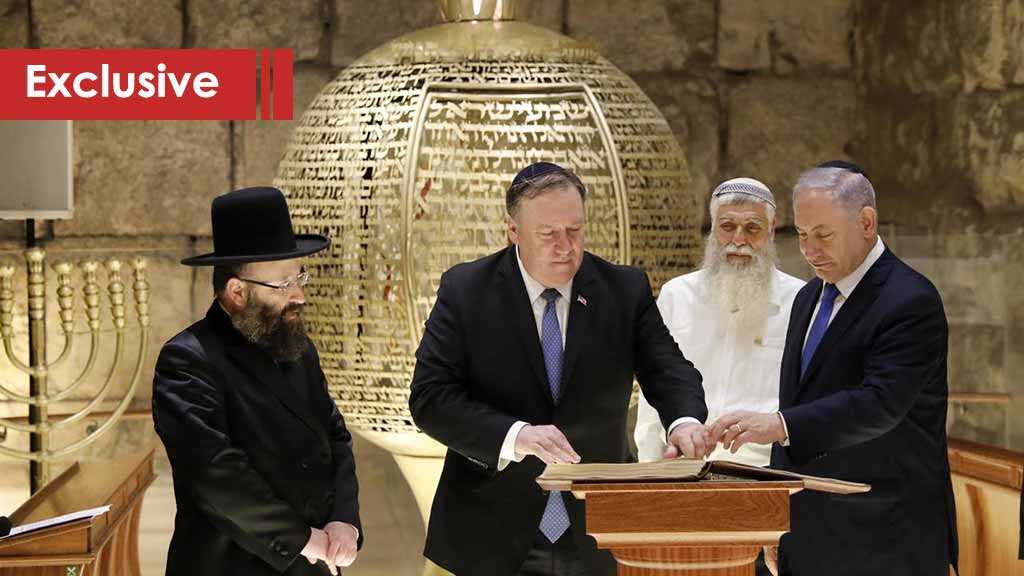 The Arab media chose to ignore the details of a recent visit to occupied Palestine by US Secretary of State Michael Pompeo despite their unprecedented scope and gravity. These details include a tour by Pompeo and “Israeli” Prime Minister Benjamin Netanyahu of occupied al-Quds and the tunnels located underneath the Old City’s Muslim quarter. In an underground center tasked with preparing for the construction of the supposed Jewish temple over the ruins of al-Aqsa, the two men watched a virtual reality recreation of the structure. The videos of the visit are available and can be seen by everyone. Pompeo was seen signing papers that were said to be an agreement on the establishment of the temple. However, this cannot be confirmed since he may have been merely signing the so-called guest book. Still, the actual visit and his inspection of the structure model are documented and confirmed.

In a sit-down with the Christian Broadcasting Network during the visit, the interviewer Chris Mitchell noted that “Israel” was celebrating the Purim holiday.

“Esther, 2,500 years ago, saved the Jewish people with God’s help from Haman,” he said, in reference to the Persian Empire. Mitchell then asked Pompeo “could it be that President Trump right now has been sort of raised for such a time as this, just like Queen Esther, to help save the Jewish people?” Pompeo replied that “as a Christian I certainly believe that’s possible.” He then went on to say “I am confident that the Lord is at work here.”

Al-Quds and its religious centrality is a strategic treasure for any occupying force to legitimize the occupation. However, annexing al-Quds without the temple does not give justification to the Zionist occupier. Besieging and fighting Iran do not seem convincing enough without conjuring up the Purim holiday and saving the Jewish people from the Persians. This as the American bias transcending all international laws and customs cannot be justified without conjuring up religion and Queen Esther "the messenger of the Lord to the Jews"!

Here, we can discuss the so-called deal of the century and try to analyze its background and objectives. According to all the leaks, there are disparities that can only be relevant for two reasons. The first is its frequent occurrence in the leaks, and the second is its uniformity with the evidence, practices and statements. We can monitor the common aspects between these leaks then try to deduce and analyze the links between them as well as the hidden objectives. As for the common aspects between these leaks, they can be outlined as follows:

These are perhaps the more common aspects between the many leaks. Some of which are related to land exchanges with neighboring countries such as Jordan and Egypt. There are other details that are exaggerated and unreasonable, despite all the official Arab mistakes, weaknesses and the sheer slacking off. The full picture will be revealed once the deal is officially announced.

As for the links between these common aspects, they can be outlined as follows:

First: Washington’s preemption policy. It is a kind of coercive diplomacy characterizing the Trump administration. This preemption policy is represented in the transfer of the US Embassy to occupied al-Quds, the cessation of UNRWA funding and the recognition of the annexation of the occupied Golan to the Zionist enemy. Thus, the move is the preemptive closure of the debate over the situation of the Golan and al-Quds. It is also a kind of starvation, creating a carrot for the Palestinians represented in aid packages when the deal is accepted.

Second: Most of what has been leaked regarding the deal is a practical reality. The enemy controls the security situation in the West Bank and al-Quds. The intention, however, is to legitimize this reality and cut the road of the resistance. Thus, resisting this situation would be considered contrary to agreements and an illegal rebellion.

Third: This point is perhaps most important and the main purpose of the deal. The official recognition of the Zionist state. Simply, this recognition puts any opposing state, here specifically Iran and the axis of resistance, in an odd political situation. The axis would appear to be opposing international legitimacy after all the Arabs, whose central cause over the past century has been Palestine, recognized the legitimacy of “Israel”. This introduces us indeed to a new and different century where the Zionists are being recognized while those who are not recognized are considered illegitimate. Perhaps this is the secret behind naming this suspicious deal as the Deal of the Century.

Therefore, we are heading towards a process of legitimizing difficult and practical situations. This is a new attempt to isolate the resistance in a way that it appears to be violating international legitimacy as well as new situations on the ground threatening al-Aqsa Mosque in order to resolve the dispute over al-Quds since the existence of Islamic holy places is a pretext for the Palestinians to fight for "Israel’s" eternal capital.

This is a very serious matter. This deal may follow the method of gradualism and imposing the reality step-by-step. It all depends on time, more humiliating Arab concessions, and weakening the resistance due to the siege and political isolation.

Perhaps these are the Zionist-American calculations. But the resistance has its own calculations and responses. The Palestinian people also have their appropriate response. Meanwhile, absent from the scene is the role of the rest of the Arab and Islamic peoples. We hope that this role returns before the reclaiming of rights becomes more costly.