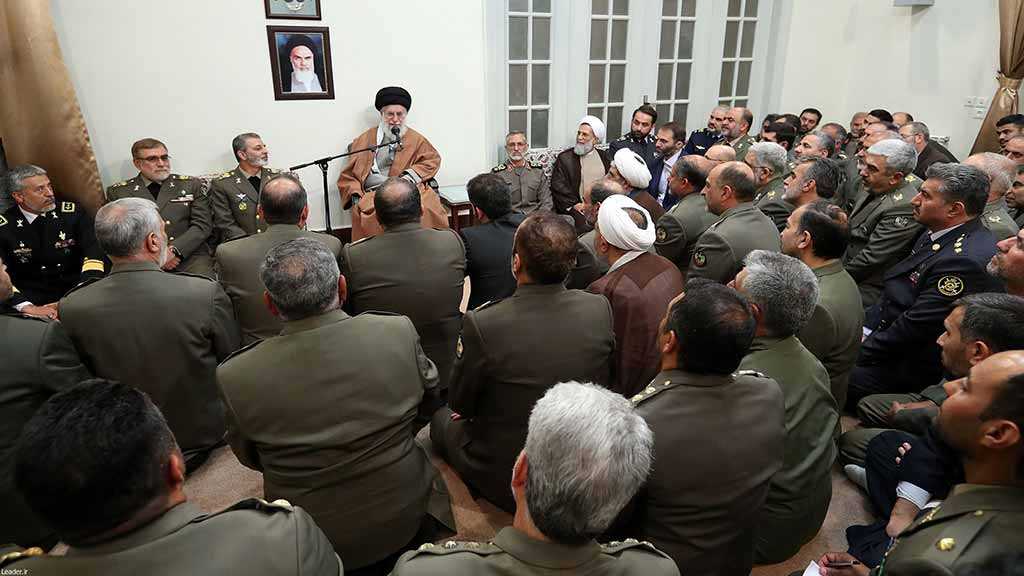 Leader of the Islamic Revolution His Eminence Imam Sayyed Ali Khamenei said the region would have been facing an unclear fate had it not been for the Iranian Armed Forces’ and the IRGC’s efforts against the Wahhabi Daesh [Arabic acronym for “ISIS” / “ISIL”] terrorists.

During a meeting with military commanders in the capital Tehran on Wednesday ahead of National Army Day, Imam Khamenei pointed to the presence of the Iranian Army and the Armed Forces in the region and their contribution to the fight against “enemies’ seditious acts” and said, “If the Army and the IRGC did not engage in the fight against Daesh, today what had become of the region and neighboring countries and who would rule over them?”

“Each and every single country that was engaged [in the fight] countered [terrorists] and took necessary measures but the role of Iran’s Armed Forces cannot be ignored,” the Leader added.

The Leader said Iran’s Armed Forces were among the “manifestations and elements of national power,” contrary to many countries even those claiming to be advocates of freedom and human rights, where the military is the element of power that counters people, an example of which we see in the Saturday [protests in] Paris.”

Imam Khamenei said the Armed Forces both in Islam and in the Islamic Republic of Iran are considered a “safe protection for nations,” noting that’s why enemies are seeking to disrupt peace of the nation through portraying the Armed Forces agitated.

The Leader said the US made baseless remarks about Iran to undermine the morale of the nation.

“The United States is struggling with thousands of billions of debt and various problems, and despite some years after floods and storms in areas such as Carolina they have not yet been able to deal with these problems, but they are ranting and raving to weaken the morale of the Iranian nation.”

Elsewhere in his remarks, Imam Khamenei commended the army and the IRGC as well as the unprecedented presence of people in flood-hit areas to help their fellow country men and women.

The Leader also underlined the importance of “ever-growing unity” among Iran’s Armed Forces, He also hailed the unity between the Armed Forces and the IRGC in the face of a recent move by the US to blacklist the IRGC.

“Whatever measure that enrages enemy is good and right but all should refrain from any act that emboldens and bolsters enemy,” Ayatollah Khamenei further said.

The United States on Monday officially registered the IRGC as a "foreign terrorist organization," according to a notice published on the website of the US Federal Register.

US President Donald Trump said in a statement on April 8 that he had designated the IRGC as a foreign terrorist organization, adding that the Iranian elite forces' designation "makes crystal clear the risks of conducting business with, or providing support to, the IRGC. If you are doing business with the IRGC, you will be bankrolling terrorism."

The US measure was met with severe criticism from Iranian officials and military commanders as well as the nation that voiced support for the IRGC.

On Tuesday, the Iranian parliament overwhelmingly approved the general outlines of a motion devised by the legislature to counter the US blacklisting of the IRGC.