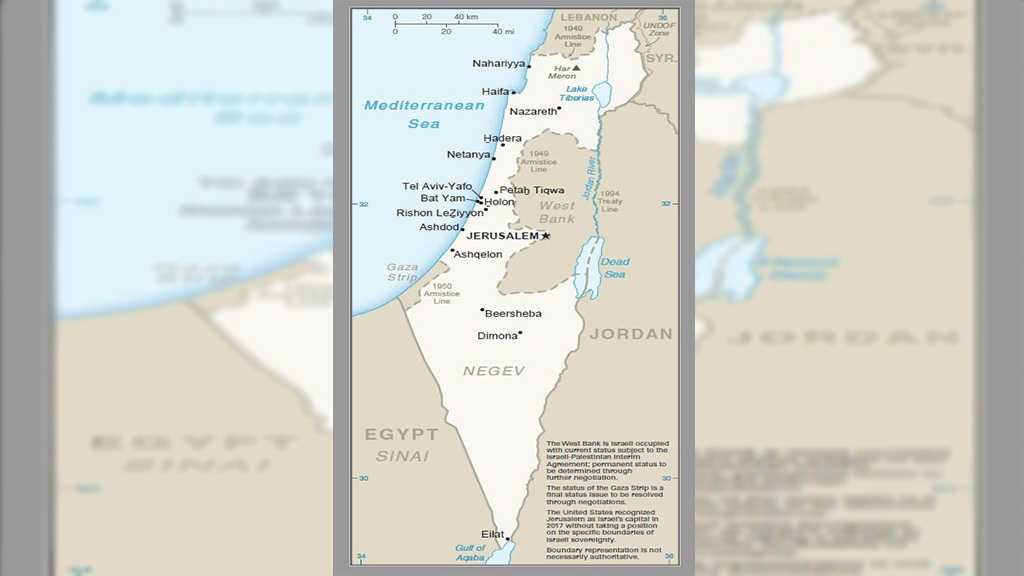 Emphasizing the grave mistake in further violating the Syrian sovereignty, the map of the claimed ‘Israeli’ occupation lands was recently published.

The measure came only three weeks after US President Donald Trump’s recognition of the strategic zone under the Zionist ‘sovereignty.’

The news was announced in a tweet by US Mideast envoy Jason Greenblatt showing the map on Tuesday with the following caption: “Welcome to the newest addition of our international maps system.”

The map shows the 1974 claimed ceasefire line between the ‘Israeli’ occupation entity and Syria as a permanent border, whereas the border with Lebanon continues to be demarcated as the 1949 armistice line.

The map further notes that the West Bank is under the ‘Israeli’ occupation, with its final status to be determined in the so-called ‘peace talks.’

And it notes that while the US recognized the holy city of al-Quds as the ‘capital’ of the Zionist entity in 2017, it does not take a position on the boundaries of the holy city, which is in fact the capital of the state of Palestine.

However, while the map was updated, text attached to the ‘Israel’ entry in the latest CIA world factbook, which included the map, continued to call East al-Quds and the Golan Heights ‘Israeli’ occupied.

Trump’s formal recognition of the Zionist entity’s sovereignty over the Golan sparked widespread international condemnation. The announcement in late March was a major shift in American policy and gave ‘Israeli’ Prime Minister Benjamin Netanyahu a needed political boost ahead of April elections.

The ‘Israeli’ regime occupied the strategic plateau from Syria in the 1967 Six Day War and in 1981 effectively annexed the area, in a move never recognized by the international community which stresses that the Golan Heights to be occupied Syrian territory.

The map was published with the US indicating it may also be on board with the occupation entity’s annexing West Bank settlements.