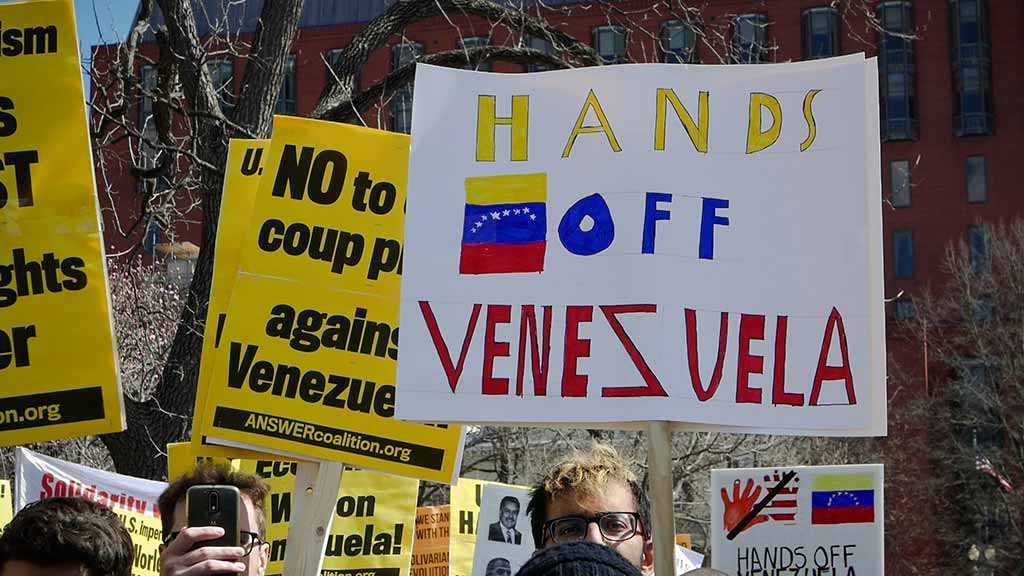 The military option has been discussed at a secret off-the-record meeting organized by Washington-based think tank earlier last week.

A military intervention in Venezuela has been reportedly discussed at a private roundtable hosted on 10 April by the Washington-based Centre for Strategic and International Studies (CSIS), The Gray Zone reported Sunday.

Straightforwardly named "Assessing the Use of Military Force in Venezuela," the off-the-record meeting involved some 40 figures, including former State Department, National Intelligence Council, and National Security Council officials, as well as Admiral Kurt Tidd who recently left the post of the US SOUTHCOM commander.

Several senior officials from Colombian and Brazilian embassies as well as representatives of Venezuelan opposition leader Juan Guaido also participated in the meeting.

The fact that the meeting took place has been confirmed by two unnamed participants, but no other details are available, The Gray Zone reports.

However, the very existence of a meeting named like this suggests Trump administration considers military operation more seriously than before, the report says, adding that such move could have been fueled by frustration that "every other weapon in its arsenal has failed" to oust Venezuelan president Nicolas Maduro.

The website managed to confirm the existence of the meeting after a check-in list containing names of those invited has been leaked. When The Gray Zone contacted one of the attendees, Sarah Baumunk, a research associate at the CSIS's Americas Program, she confirmed military options were discussed.

"We talked about military… uh… military options in Venezuela. That was earlier this week though," she said, referring to the meeting being wrongly dated 20 April in the document. However, when pressed for more details, she refused to talk.

Another attendee, Santiago Herdoiza, a research associate at Hills&Company strategy and trade consulting agency, also slipped out that the meeting took place.

"I'm sorry, that was a closed meeting. Good evening," Herdoiza said when contacted by phone.

A military intervention option has repeatedly been hinted at by US officials, with Secretary of State Mike Pompeo confirming earlier this week that "every single tool, every single option remains on table," despite the Lima Group of Latin American countries rejected such a scenario. The United States also lacks support from the United Nations Security Council.

The US has provided support to opposition leader Juan Guaido, recognizing him as Venezuela's interim president, while Russia, China, Turkey and a number of other nations consider Maduro as the legitimate leader. Despite Guaido's efforts to oust legitimate president Nicolas Maduro, he remains in power, controlling the armed forces and the nation's oil industry. Speaking to Chilean Mega TV, Mike Pompeo admitted that Russian and Chinese support for Maduro makes the president's leave more difficult, blaming Russia of "intervening without authority," despite Russia never exceeded terms of earlier military cooperation agreements signed with late Venezuelan leader Hugo Chavez.