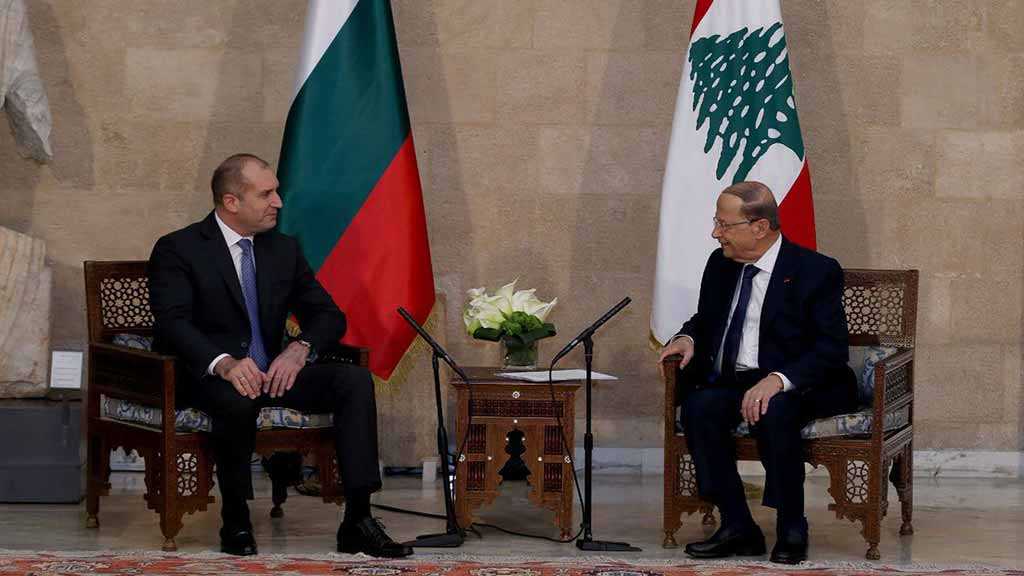 “Bulgaria can be Lebanon’s gate to the European Union, like Lebanon is our gate to the Middle East,” Radev said in a joint news conference with President Michel Aoun after a meeting between the two at Baabda Palace.

The Bulgarian president said he and Aoun discussed new ways for the two countries to boost cooperation.

He said that direct flights between Beirut and Sofia will be launched soon, after Lebanon and Bulgaria agreed last month to establish permanent direct flights following an official visit by Lebanese Foreign Minister Gebran Bassil to the Bulgarian capital.

Aoun said at the news conference he briefed his Bulgarian counterpart on the “burdens of hosting 1.8 million Syrian refugees,” emphasizing that “facing the Syrian refugee burden is a joint international responsibility.”

The president has on multiple occasions called for not tying the return of the Syrian refugees to a political solution to the yearslong conflict in Syria.

The two also discussed “the importance of forming a joint committee for trade, industry and agriculture to cooperate with the Bulgarian side ... which can be a connecting bridge between our two countries,” Aoun said.

Their meeting came shortly after Radev’s arrival in Beirut for a two-day official visit upon Aoun’s invitation.

The president and First Lady Nadia Aoun received Radev and his wife Desislava Radeva at Baabda Palace in an official ceremony. The two stood as the presidential guard played the Bulgarian and Lebanese national anthems, with the Bulgarian flag raised outside the palace.

Radev is set to meet Speaker Nabih Berri and Prime Minister Saad Hariri later during his visit to discuss Lebanese-Bulgarian ties and ways to enhance them, according to the state-run National News Agency.

The Bulgarian president’s plane arrived at 9:30 a.m. at Rafik Hariri International Airport, where he was received by Minister for the Displaced Ghassan Atallah, Mount Lebanon Gov. Judge Mohammad Makkawi and other high-ranking security officials.