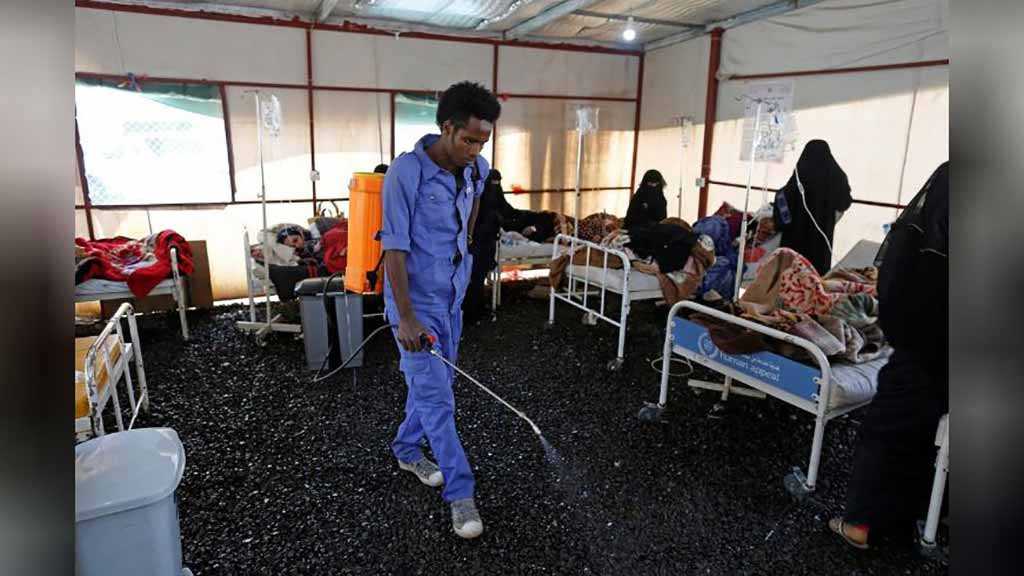 Yemeni doctor Mohammed Abdul-Mughni described the surge in cholera cases he was treating as “disastrous” in a country battered by years of war and short of medical staff.

Yemen is suffering its third major outbreak of the water-borne bacterial infection since the conflict broke out in 2015, causing the world’s most urgent humanitarian crisis that has put 10 million people on the brink of famine.

The disease is spreading like “wild-fire”, according to the United Nations which recorded 110,000 suspected cholera cases and 200 deaths in three months.

Abdul-Mughni had been working in a temporary diarrhea treatment center in the grounds of a hospital in Sana’a where around 120-150 severe cases arrive every day.

“We are taking in patients around the clock, constantly ... Cholera is spreading widely now,” said Ismail Mansoury, a doctor who worked alongside him. “In the past two weeks we have admitted around 1,100 confirmed cholera cases.”

Cholera causes profuse diarrhea and fluid loss which can kill within hours. Children, the elderly and those weakened by years of poor nutrition are most at risk.

The center outside the capital’s Sabaeen hospital has tents, outdoor toilets and overworked staff. Listless women on drips take up every spot of available shade. Elderly ladies and children lie on gravel. A man helps a boy up a large step to use a latrine.

Many of those arriving are in shock or have kidney failure, with veins so shriveled by dehydration it is difficult to insert a needle to administer lifesaving fluids.

The four-year-old war that pits the Houthi movement against the Saudi-backed resigned regime has crippled the healthcare system and economy, forcing people to travel long distances to seek medical care.

Mona Ali’s 70-year-old mother-in-law traveled 25 km (15 miles) to the hospital in a minibus after three days of uncontrollable diarrhea and vomiting.

Ali, who herself had cholera two months ago and recovered at home, said the family was extremely poor and had to take a loan to bring her mother-in-law on the bus.

“We survive off yoghurt ... If there was food the body would be stronger,” she said.

Water resources are scarce in the poorest Arabian peninsula nation and pumps are needed in many parts of the country of 30 million people to bring water to the surface. Fuel shortages have dramatically increased the price of clean water.

Ali said her village cannot afford the diesel needed to pump underground water. “We end up taking it from the wells, even though there is hardly a drop of water in them and it harms us,” she said.

The outbreak coincides with an early start to Yemen’s rainy season, but is also a sign of the war’s degradation of public infrastructure.

“There is an issue with waste disposal in the country. We know that many communities don’t have proper sewerage water systems in place. That sewage water is being used for irrigation and other purposes,” World Health Organization spokesman Tarik Jasarevic said.

Increased awareness about the disease could also account for more reported cases this year, he added.

In a bid to stem the disease’s spread, diggers have been removing garbage from storm drains in Sana’a and workers are spraying streets, drains and trash piles with disinfectant.

The war has cut transport routes for aid, fuel and food, reduced imports and caused severe inflation. Households have lost incomes because public sector wages are not being paid and conflict has forced people from their homes and jobs.

Mohammad Habab, a 34-year-old university-educated father of three, still works in a state pharmaceutical company but receives no salary.

His three-year-old daughter Zainab was hooked up to an outdoor drip 80 km from home after developing cholera symptoms that Habab blames on a lack of clean water and nutritious food.

The UN and aid agencies are stepping up their response, but conditions and access within the country remain challenging.

“We are working to the extremes of our strength,” Abdul-Mughni told Reuters before his death.