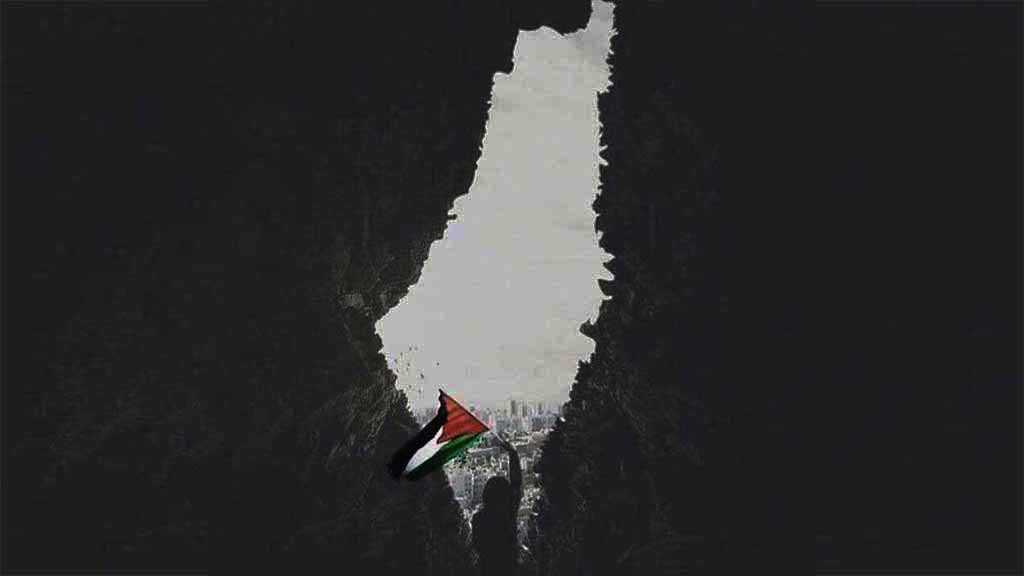 “Israel” never gets tired of imposing the same occupation experience. It is stupidity or the nature of tyrants that gave rise – knowingly or unknowingly – to the popular icons that occupy a large portion of the society’s emotional state.

The “Israeli” army's snipers rewrote the details of the story of the Great March of Return. Its heroes are a group of simple people who took to the streets in their thousands on March 30, 2018 to demand their historic right to return to Palestine. This was before the bullets transformed them into unforgettable icons. Others are still alive – and so is the resistance.

A sniper of a different kind 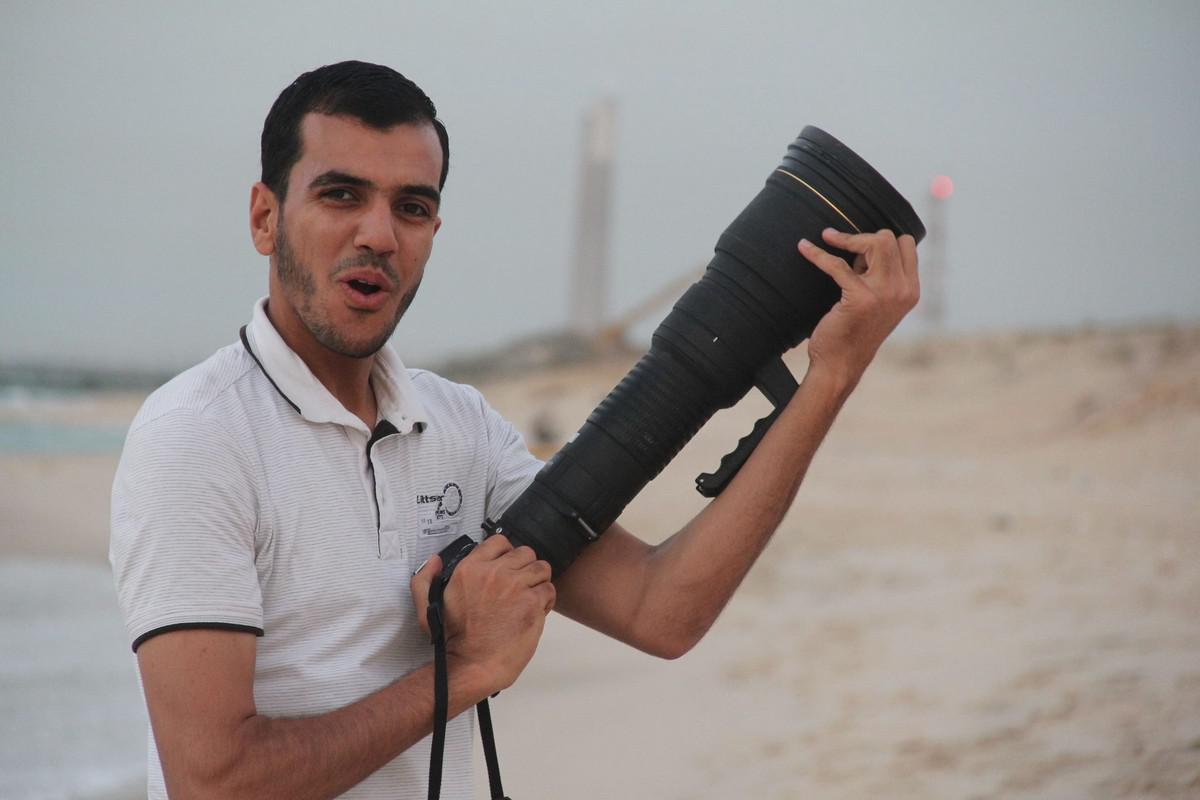 "Even Yasser himself did not expect the ending to be so quick. He might have expected how it would look, but he still had so much he wanted to do," said a close friend of martyred journalist Yasser Murtaja. Since the first day of the Great March of Return, Murtaja had not left the field. He shot images of what his camera captured and what the snipers hit. The young man spent his 30 years in Gaza, the only city he knew his entire life as he once said. Since the beginning of his career as a journalist, he was able to capture the most beautiful images that reflected his optimism. "Always smiling," his fellow journalists said, adding that he was one of the few who only had their pictures taken while they were smiling. He also published materials that made people smile but invoked a sense of bewilderment at the same time.

In the devastated Shejaiya neighborhood following the 2014 war, Murtaja filmed his documentary, "Gaza: Surviving Shejaiya". The story revolves around a girl, Bisan, who he rescued from the rubble. A close bond formed between Yasser and her, allowing him to be Bisan’s only friend and companion through the mental and physical rehabilitation that she underwent following the martyrdom of her family.

He was an ambitious young man. Murtaja was the founder of Ain Media and one of the first individuals to take a picture of Gaza using a drone camera. The residents of the Strip, who never saw their land from an airplane window or from a skyscraper, saw the picture but without knowing it was him who took it. Murtaja was injured on April 4, 2018. Everyone prayed for him to get better. However, he passed away on the same evening to become the first media person to be killed by the “Israelis” in the Great March of Return. His colleagues carried his body as it was photographed using his drone camera. 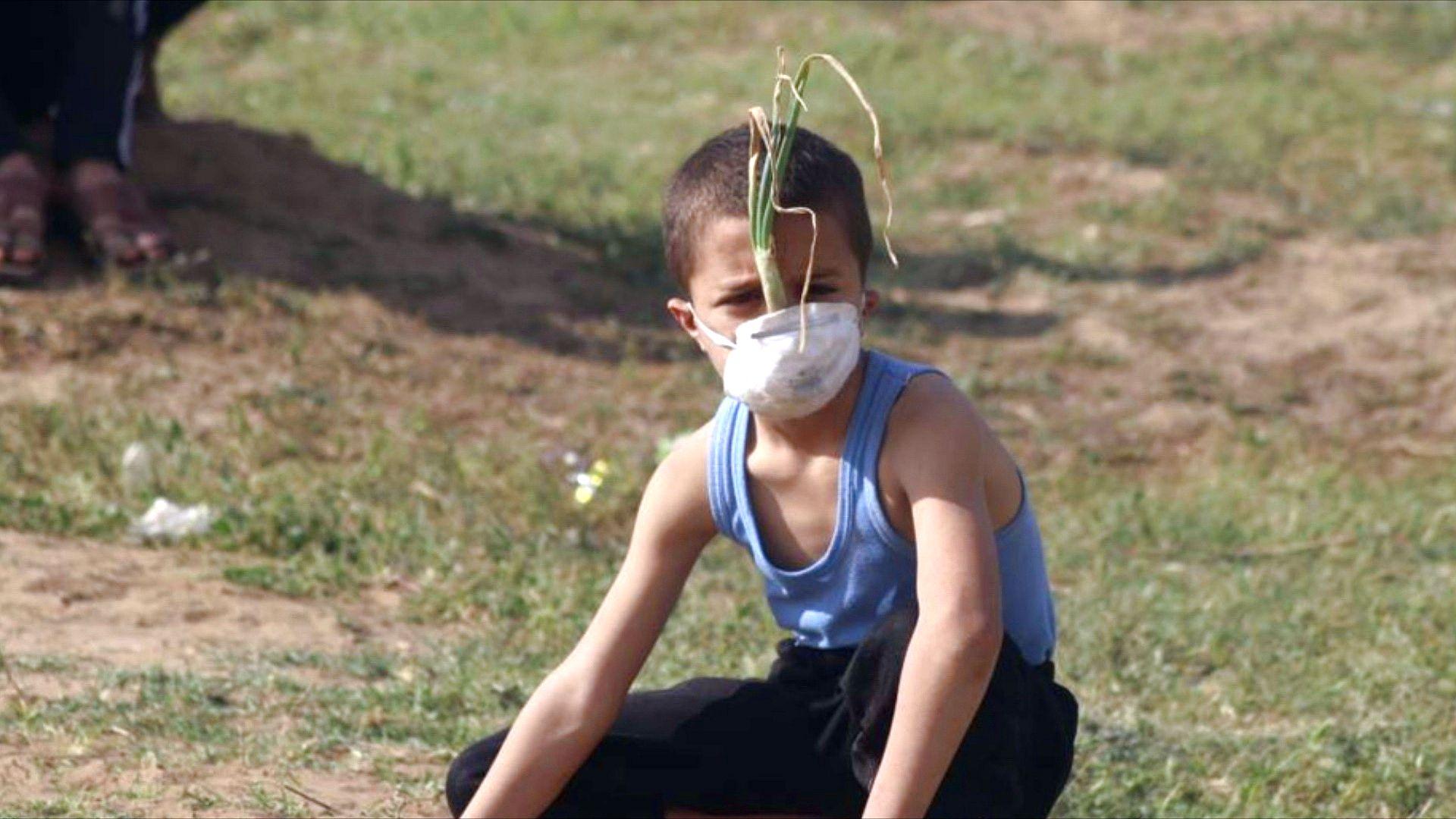 The image of the child, Mohammed Ayyash, aroused the curiosity of various international agencies. Ayash, who is barely nine years old, filed a patent and an idea in an attempt to overcome the tear gas fired by the “Israeli” army on demonstrators. He heard his father, who was wounded in the first Palestinian Intifada [uprising] (1989), say that onions are the best solution to fight the effect of the gas. Although the "onion mask" is only made up of a medical facemask and an onion he picked from one of the agricultural fields, the child became an icon on social media, as well as among the Arab and international press. After his picture was taken by journalist Osama al-Kahlout, he was honored and hosted by various media and national bodies.

"The onion mask" picture was recorded as one of the funniest, most innocent and challenging scenes. It was a piece of equipment the child had prepared in his bag along with pieces of potatoes because he was expecting that he would enter occupied Palestine on that day. Thinking that the stones thrown at the soldiers come only from refugee camps, he decided to stone the soldiers with potatoes! In this innocent manner, Muhammad recounted the events of that day. He became one of those who translated their actions into a simple language, the language spoken by the rightful owners before their occupiers, who are armed with all the instruments of death.

The revolutionaries in wheelchair 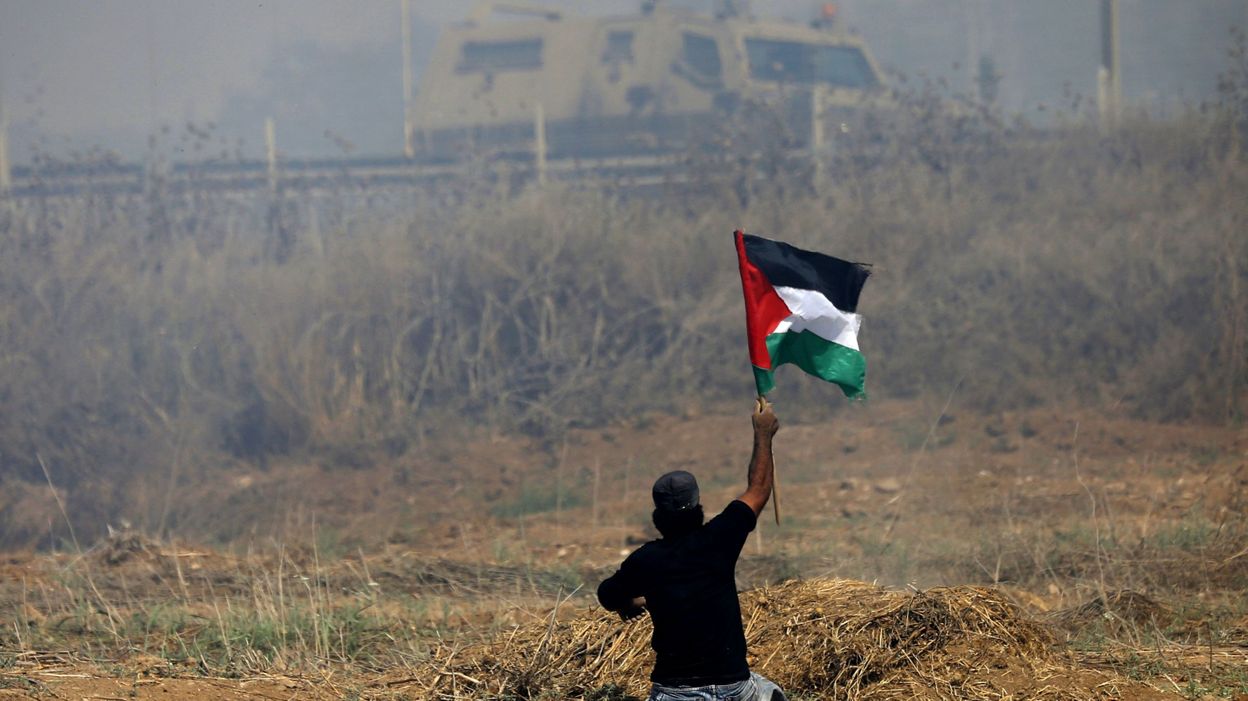 What symbol can a picture of a limbless young man leaving his wheelchair and crawling across the eastern border of the Strip present? He chants sometimes, and throws a stone that won’t fall further than a few meters from his body at other times. That is what martyr Ibrahim Abu Thuraya, the first icon of the protests against the American declaration to transfer the US Embassy to occupied Al-Quds, did. His picture and footage of his chants, which spread rapidly, was the beginning of the storm that his death caused on 15/12/2017. Abu Thuraya lost both legs in a bombing that targeted him in 2008. Despite his disability, he was keen to be the first attendee along the border since late 2017. The events of his martyrdom shocked the people in Gaza, as if he was telling them that they had no excuse when the wounded and the disabled head the ranks of the masses. 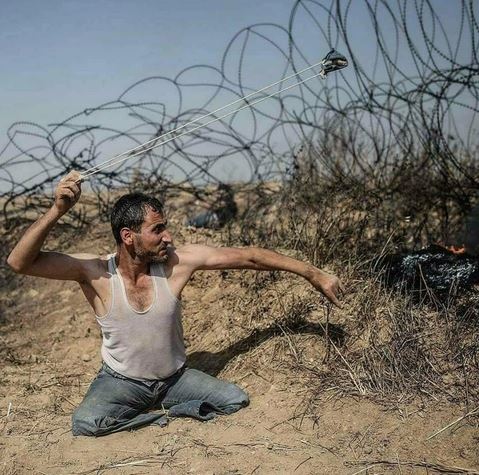 Fadi Abu Salah was Abu Thuraya’s successor. He was not content with just a symbolic participation in rebellion against his disability. He was an active contributor to throwing stones and mobilizing the masses. As in his life, his martyrdom in 14/5/2018 marked a turning point in the Arab and international media coverage of the Great March of Return. His photos contributed to the continuity of the popular momentum.

The first of the angels 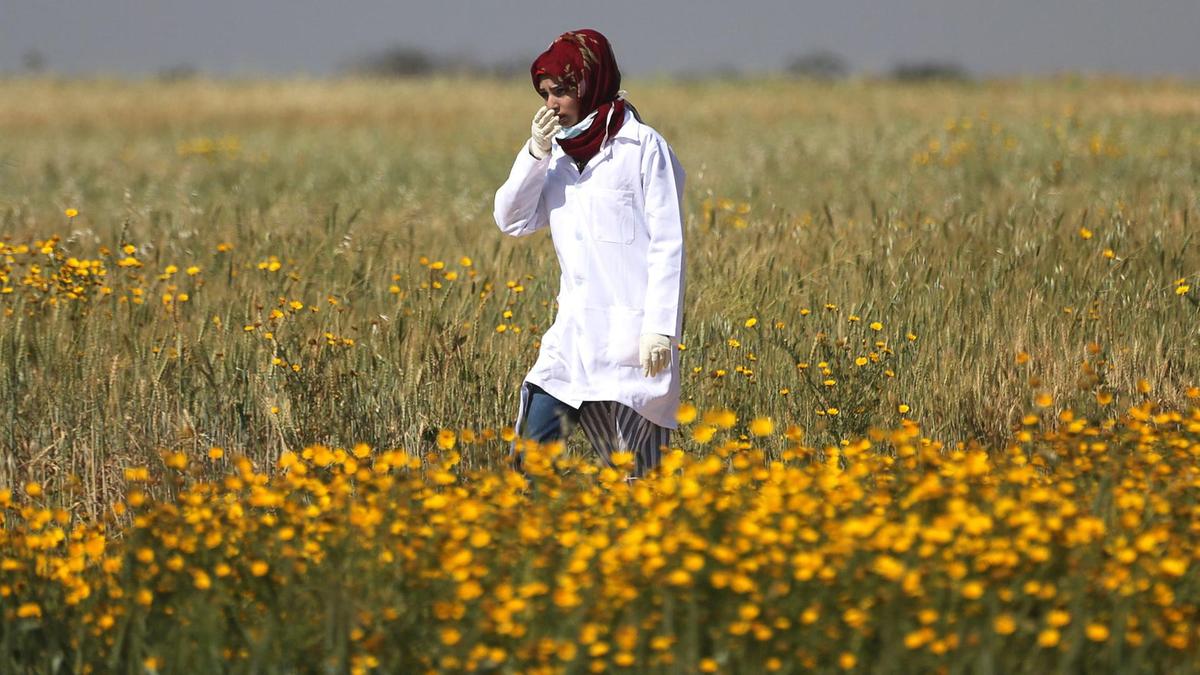 A visitor to the house of martyr Razan al-Najjar in the Khuza'a neighborhood east of Khan Younis (south) can understand that the siege and repeated wars would only push a young woman to believe that the occupation is the cause of her crisis as well as that of her peers. Poverty that gave them simplicity, rebellion and redemption is the common factor that brought together Razan and the thousands who participated in protests along the eastern border of the Strip. The 21-year-old was known for her courage and her energy in providing first aid to the injured on the field. She seemed convinced of what she was doing when she said, "I am here at the line of contact. I form a human shield. I came here with courage and strength to save the lives of our brothers. Despite being injured and have a fractured arm, I refused to put a cast so it would not hinder my movement.”

Courageous Razan's story came to an end when an “Israeli” sniper decided to kill it with a bullet that penetrated her back. The young woman, who was an active volunteer in the medical relief organization, passed away. With her departure, she shed the light on the cause of targeting medical staff during the marches. On the next Friday after her martyrdom, Razan’s mother wore her daughter’s medical coat and joined the marches with tens of Razan’s colleagues.