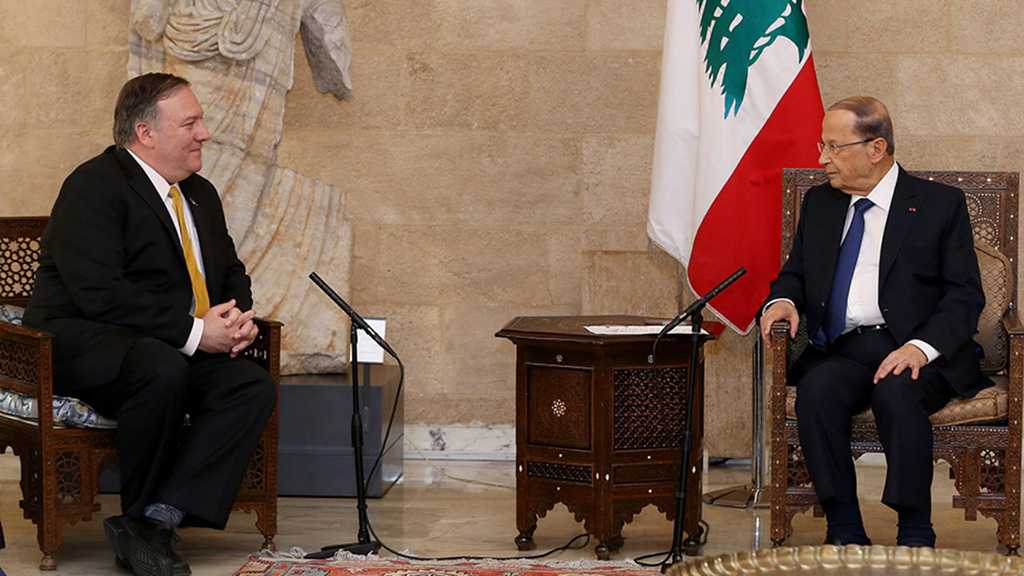 Lebanese President Michel Aoun slapped US Secretary of State Mike Pompeo hard as he stressed that the Lebanese resistance movement, Hezbollah, has a popular support in the country.

"Preserving national unity and civil peace is a priority for us," Aoun told Pompeo, the Lebanese presidency said on its Twitter feed.

Pompeo met with Aoun at the presidential palace in Baabda, east of the capital Beirut on Friday.

Pompeo claimed that his pressure on Iran and Hezbollah was working and urged Lebanon to stand up to the resistance movement which he accused of "terror and threats.”

"Our pressure on Iran is simple. It's aimed at cutting off the funding for terrorists and it's working," he said in a statement after meeting Lebanese political leaders. "We believe that our work is already constraining Hezbollah's activities."

During a joint news conference with Lebanon's Foreign Minister Gebran Bassil, Pompeo called on Lebanon to pick a side.

"Lebanon and the Lebanese people face a choice: bravely move forward as an independent and proud nation or allow the dark ambitions of Iran and Hezbollah to dictate your future," he said.

Bassil, for his part, rejected the terrorist denunciation of the US official for Hezbollah.

"Hezbollah is a Lebanese party, not a terrorist group, and it enjoys a wide popular base," he said.

Earlier, speaker of Lebanese parliament, Nabih Berri, told Pompeo that American sanctions against Hezbollah were having a "negative impact on Lebanon and the Lebanese.”

Berri told Pompeo in a meeting in Beirut that Hezbollah is a Lebanese political party whose members are in the government and parliament, and that it is carrying out “resistance” against ‘Israel’ to free Lebanese territory from ‘Israeli’ occupation.