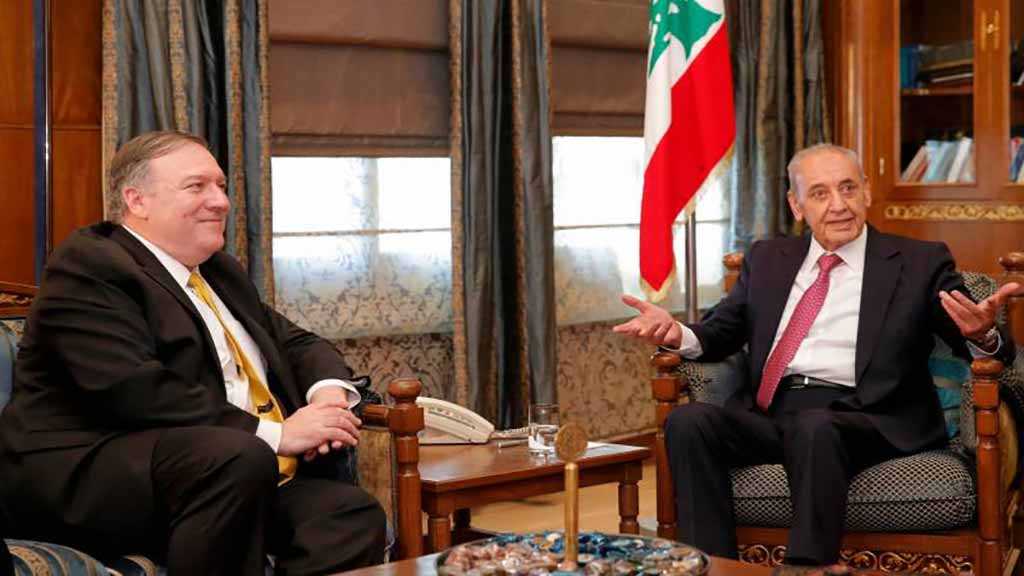 US Secretary of State Mike Pompeo Friday met with Speaker Nabih Berri and Prime Minister Saad Hariri during his trip to Beirut, the last leg of a regional tour that also took him to Kuwait and the “Israeli” entity.

Pompeo arrived at Rafik Hariri International Airport just after 11 a.m. He headed directly to the Interior Ministry to meet with Interior Minister Raya El Hassan, accompanied by US Ambassador to Lebanon Elizabeth Richard.

Pompeo then went to Ain al-Tineh to meet with Speaker Nabih Berri. The meeting lasted around an hour, after which Pompeo headed to the Grand Serail for talks with Hariri. A statement from Hariri's office said the two officials discussed regional developments and bilateral relations.

According to a statement from Berri’s office, the speaker told Pompeo that Hezbollah was a "Lebanese party that is represented in Parliament and government,” adding that the party’s “armed resistance against ‘Israel’ is a result of continuing ‘Israeli’ occupation of Lebanese territory.”

The two discussed US sanctions against Hezbollah, which the US designates as a terrorist organization. Berri told Pompeo that the sanctions had a “negative impact on Lebanon and the Lebanese."

The statement added that their meeting focused on the importance of protecting Lebanon and “the need to resolve the maritime border” dispute with the “Israeli” entity. Pompeo expressed US willingness to help with mediation efforts on the issue.