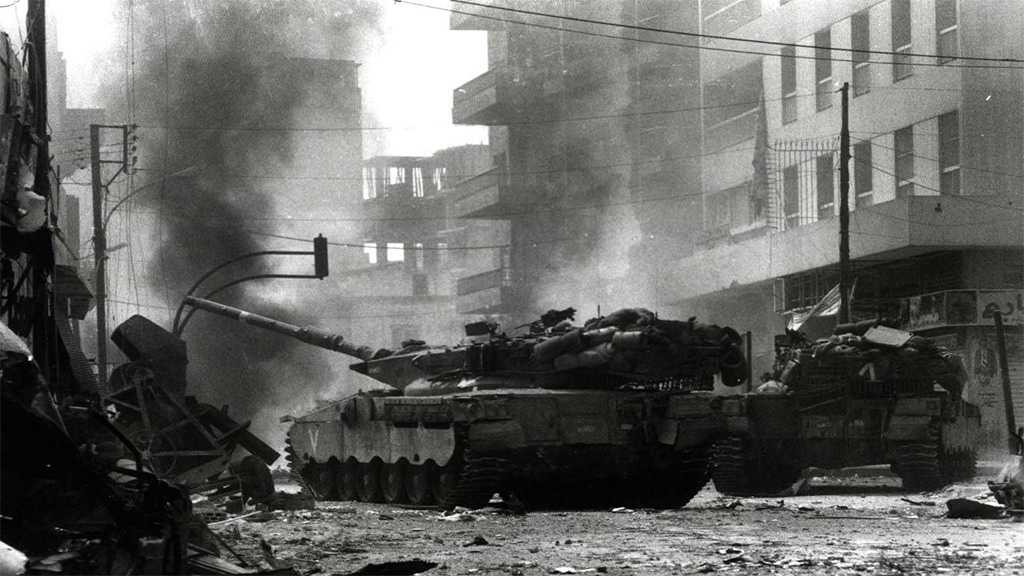 After the 1948 Arab-"Israeli" war, Lebanon became home to more than 110,000 Palestinian refugees from their homes in present day occupied Palestine.

In 1970 and again in 1971, the Palestinian Liberation Organization was engaged in the so-called Black September incidents, which routed a large number of Palestinian fighters and refugees into Lebanon. By 1975, they numbered more than 300,000, most of which were concentrated in South Lebanon.

On March 19, 1978, five days after the "Israeli" invasion of Lebanon, United Nations Security Council Resolution 425 called on "Israel" to withdraw immediately its forces from Lebanon and established the United Nations Interim Forces in Lebanon [UNIFIL].

The first UNIFIL troops arrived in Lebanon on March 23, 1978, just four days after the resolution was passed. By June, "Israel" retreated from the Litani River to Lebanese town on the border with occupied Palestine.

By that time, the PLO became a powerful force and "Israel" decided to root out the organization from Lebanon citing threats to the security of northern occupied lands. It needed a pretext.

On June 3, 1982, "Israel's" ambassador in London Shlomo Argov escaped an assassination attempt. Then "Israeli" Prime Minister Menachem Begin had been informed by "Israeli" intelligence that the PLO was not involved in the attack on Argov, but withheld this information from his Cabinet. Rafael Eitan, who was then the Chief of Staff of the "Israeli" army, responded to the aforementioned information in his famous saying "Abu Nidal, abu shmidal. We need to end PLO!"

On June 4 and 5, "Israeli" F-16 planes bombed Palestinian refugee camps and other PLO targets in Beirut and southern Lebanon killing 45 and wounding 150. For the first time in over ten months, the PLO responded by launching artillery and mortar attacks on northern occupied Palestine. On 6 June 1982, "Israeli" forces under direction of War Minister Ariel Sharon invaded southern Lebanon in an operation dubbed "Peace of the Galilee."

According to former chief of "Israeli" military intelligence Yehoshafat Harkabi, the 1982 invasion of Lebanon was accompanied by deceit at the highest political levels. Harkarbi cites misleading statements to the cabinet by Ariel Sharon and Begin, inaccurate announcements by "Israel's" military spokesmen and the Likud government`s gross exaggeration of attacts conducted from Lebanon. War Minister Rabin admitted in the Knesset that during the eleven-month ceasefire preceding the war, "Israel's" northern settlements had been attacked only twice and that during this period "Israel" had suffered a total of two killed and six wounded from attacks. These attacks had been preceded by "Israeli" strikes in response to the planting of a bomb on a bus and the attack on Shlomo Argov.

"Israel's" publicly stated objective was to push back the PLO 40 kilometers to the north. The "Israeli" forces soon reached that target but decided to press forward in a bid to "drive the PLO from southern Lebanon once and for all. Tyre and Sidon, the two major cities in the south of Lebanon were heavily damaged, and the Lebanese capital Beirut was shelled for ten weeks, killing both PLO members and civilians.
An agreement was reached later in 1982, and American, French and Italian peacekeepers, known as the Multinational Force in Lebanon, sent more than 14,000 PLO combatants out of the country in August and September. About 6,500 Fatah fighters sailed from Beirut to Jordan, Syria, Iraq, Sudan, North and South Yemen, Greece, and Tunisia, which became the new PLO headquarters. Philip Habib, Ronald Reagan`s envoy to Lebanon, provided an undertaking to the PLO that the Palestinian civilians in the refugee camps would not be harmed.

One day after the assassination of the newly appointed president of Lebanon Bashir Gemayel [the leader of the Phalanges` Lebanese Forces], "Israeli" forces occupied West Beirut, in violation of the Habib agreement. At that time the Lebanese Christian Militia, also known as the Phalange Party, was allied with "Israel". The "Israeli" command authorized a force of about 150 Phalange fighters` entrance into the Sabra and Shatila refugee camps, under the leadership of Lebanese Forces senior official Elie Hobeika. The result was a massacre of between 700 and 3500 defenseless Palestinians. Further "Israeli" investigation found that Ariel Sharon is indirectly responsible of this massacre, leading to his resignation from his position as war minister.

For 22 years, "Israel" launched wars and committed massacres against the Lebanese people from whom the Lebanese resistance and later the Islamic resistance emerged to deal the "Israeli" occupation and its collaborators blow after blow, until May 2000.

More than 22 years after resolution 425 was passed, "Israel" was forced to withdraw its troops from southern Lebanon. It was the first time in the history of "Israel" and the Arab world that a small group of resistance fighters force out the once "invincible army" from a land it had occupied.