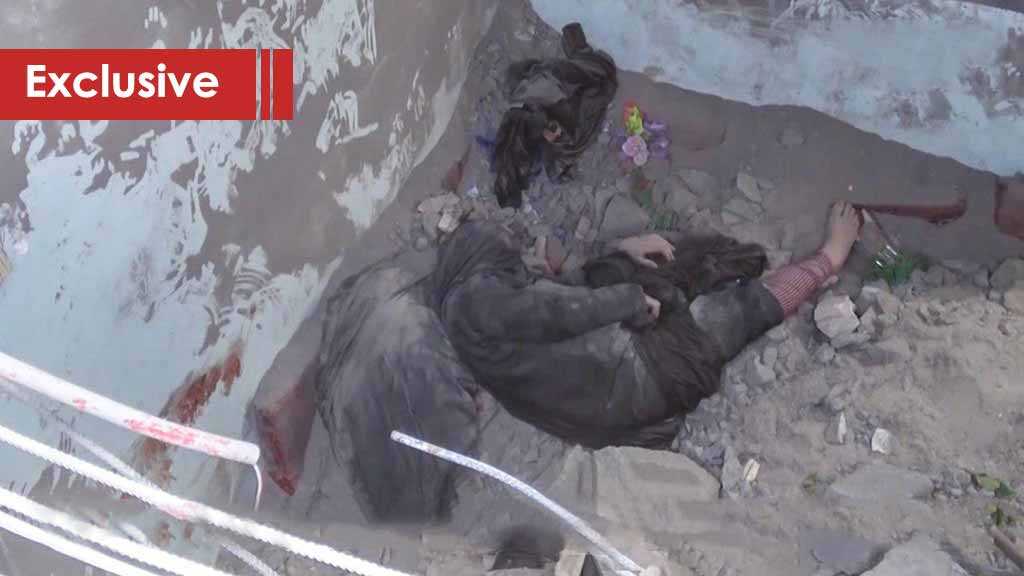 Sana'a - Saudi-led airstrikes have targeted two houses used as shelter for women and children during the latest round of clashes between Yemeni Army backed by Ansarullah fighters and Saudi-backed Takfiri militants in Kushar district of Hajjah province northern Yemen.

While the world has not finished celebrating International Women's Day, women in Kushar district were looking for other houses to be used as a shelter to protect their children from mortar shells of Saudi-backed Takfiri militants and the coalition's airstrikes.

On Saturday night, Saudi-led coalition waged heavy bombardments in a series of its almost two months of air campaign to support its militants who cut roads and odd jobs. Two air strikes in one hour killed 13 children and 9 women with another 19 women and children wounded.

Ahlam Okaiys, 13, and her friend Norah Al Zlayil, 13, and 14 women and children were in a house of Al Ahdab family. The house is located in an area far from fire battles, without thinking the reconnaissance drones are monitoring them.

It was on Saturday, at around 9:30 PM, an airstrike targeted a house, used as a shelter, for Al Hadi extended family of 25 children and women. Yemen's Health Ministry said "six women and four children have martyred" from this family alone.

Naser Omran, a rescue local, describing the incident said the women and their children run for a near-by farm to hide under trees. "But it was for no aveil," Omran told al-Ahed News. "Just after an hour, the air strike targeted them [including Ahlam and Norah and the 14 children and their mothers].

Due to the non-stop hovering of warplanes and reconnaissance drones, locals found it hard to do the work of rescue team.

Mission to Rescue "Ahlam" and "Norah"

Al-Ahed News has visited "48 Hospital" in Sana'a where Ahlam and Norah get treatment after being transferred to for treatment after 24 hours. We found Ahlam sits on the bed "unconscious", but Norah died as soon as she arrived the hospital, according to medics.

Naser Omran, rescue and also a relative of Norah said paramedics could not reach the scene of the crimes since 9: 30 P.M. until early hours of Sunday.

"We traveled from Hajour at 8:00 a.m., but we arrived Sana'a only at 10:45 p.m.," Omran told al-Ahed News. "We transported the wounded on private car for fear the ambulance car would be targeted."

Mohsen Al Saeedy, medic at 48 Hospital in Sana'a said it was normal for Norah to die. "The case [Norah] died because of the delay that it took paramedics to transfer her to a hospital," Al Saeedy told al-Ahed News.

Omran, told Al Ahed News that father of Norah is a medic who works at Kushar district. "He couldn't treat her and safe her life. He suffers from trauma".

Omran added, he was with Norah father at home, but women were gathered at Al AHdab house, that's the house of Norah's mother too.

Norah died, but Ahlam still on a bed at the hospital without knowing that her best friend Norah has martyred. Ahlam( means dreams in Arabic) has already lost her sister, Noor, 10, at the indiscriminate air strike on the farm they run from the house thinking it would safe their  lives.

Ashwaq Saeed, medic treating Ahlam told al-Ahed News while sitting near here bed on Monday afternoon: "the case [of Ahlam] suffers from wounds and pains at her eyes, and the knee (without specifying which one). She has injuries at the abdominal and the chest."

"Ahlam injuries are minor", she added, wishing Ahlam a quick recovery. “She has no escort, only a grandmother. She is in another room right now," She said.

Ashwaq said Ahlam is an orphan, without giving details whether from her father or mother. Al-Ahed News couldn't verify this information.

"We did not think we'd see it happen"

Since Yemeni army and popular committees of Yemen's Ansarullah Movement have launched their operations against Saudi-backed Takfiri militias in Kushar of Hajjah province that is close to borders with Saudi Arabia Saudi media has since launched several media campaigns to back the militias.

In addition, the Saudi-led coalition has supported the militias with all logistics, thinking they could cut the road against the Yemeni army reinforcements reaching the front lines with the borders.

However, the Yemeni Army, the local tribes and Ansarullah fighters were able to surround the Saudi-backed militias, ending up last Friday with big defeat in the militias' ranks. Local media has hailed the Saudi led coalition in its huge amounts of airdrops of weapons and food to back the militias.

However, in response to this defeat, Saudi-led coalition waged indiscriminate airstrikes on Kushar district of Hajjah. With locals saying it was hard for civilians to leave their homes and farms.

“We did not think we'd see it happen," Naser Omran told al-Ahed News at the hospital, referring to this latest Saudi massacre. Omran, said, it is hard for him and others to displace and “leave our homes, farms, and livestock".

“They’re not Houthis [Ansarullah] fighters, these are children and women" Omran noted." They [Saudi Arabia coalition] want to target innocents and children".