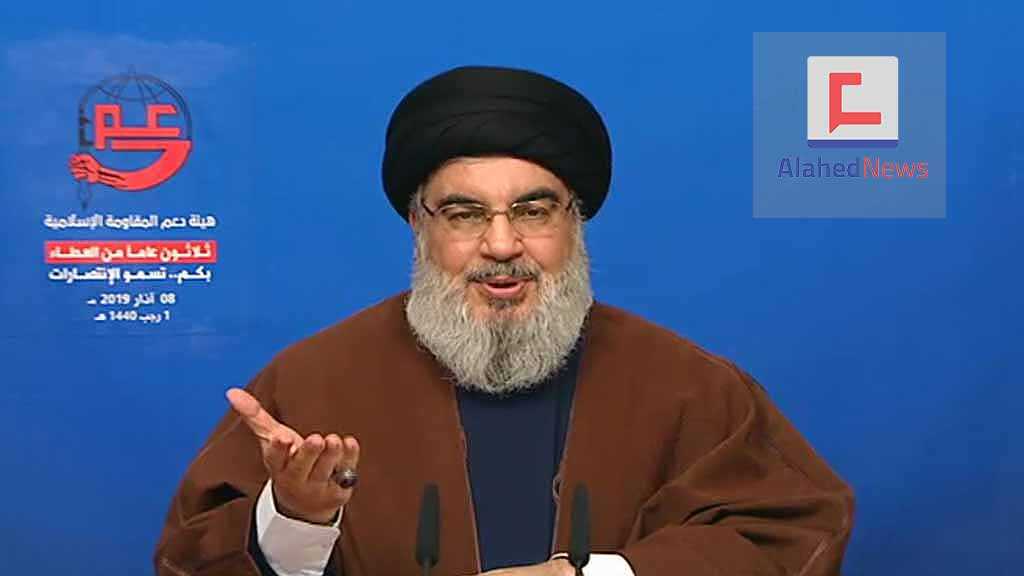 Hezbollah Secretary General His Eminence Sayyed Nasrallah delivered on Friday a speech in which he tackled various files.

Addressing a crowd of supporters commemorating the 30 years on the establishment of the “Support to the Resistance Organization”, Sayyed Nasrallah called for remembering “all those who took the initiative to gather money, support and carry out this blessed and great work especially when the resistance was in its beginning, thirty years ago.”

Expressing pride on all who support the resistance financially, His Eminence stressed the importance “of another area for Jihad that is with money, which is one of the elements of natural force and resistance’s  need.”

Commenting on the recent decision by Britain to proscribe Hezbollah, Sayyed Nasrallah underscored that “there are countries that have started to develop lists of ‘terrorism’.”

“It is expected that other countries adopt a similar resolution to the British decision classifying the resistance as “terrorist”,” he predicted.

However, the Resistance Leader assured that “Hezbollah remains strong  despite being under attack.”

Back to 2011, Sayyed Nasrallah recalled how the enemies “started to target Syria and then Iraq as well as the entire resistance axis.”

“They continue to pressure Lebanon and Palestine, while there is an open war on the Yemeni people,” he elaborated, pointing out that “the axis of the resistance stood in face of this scheme and was decisive in the battles in Syria, Iraq and Lebanon.”

Meanwhile, he reiterated that “the resistance axis is triumphing across the region. It is further standing in face of [US President Donald] Trump and his son-in-law [Jared] Kushner's “deal of the century” schemes.”

On the British and US moves against Hezbollah, His Eminence viewed that “they took punitive measures against us because we defeated them and toppled their schemes, because we are strong and capable.”

“The “Israeli” is afraid and scared from waging  any war,” he said, noting that “the current sanctions are part of the economic, psychological and financial war that has been waged against us.”

In parallel, Sayyed Nasrallah addressed the Resistance community by saying: “Those who can’t defeat you with war imagine that they will succeed by financial siege. They are imposing sanctions on us because we have defeated their scheme.”

Once again, Hezbollah Secretary General assured that “despite all that is happening, they have not been able to impoverish or siege us. Those who support us, continues to do so whether nations or peoples.”

According to him, “we may face some difficulties, but with good management we can overcome this war.”

He further highlighted: “We emerged victorious in July War as well as in Syria while our enemies were waiting for us to be defeated. When we went to Syria, some people stood in the world and Lebanon at the edge of the river waiting for our defeat and bodies. However, we won. And now, they will not manage to break our resolve.”

“The Resistance will increase in strength, presence and influence,” Sayyed Nasrallah vowed, thanking the Resistance community that despite the financial crisis managed “to collect and donate two million dollars to the Yemeni people.”

On the internal Lebanese, His Eminence announced that Hezbollah has “started the fight against corruption in Lebanon by opening two files and there are other files coming.”

Undermining recent political [March 14] attacks against his party, he emphasized that “claims that we want to take the state's money are baseless.”

“Lebanon is precious to us and we are among the Lebanese who have offered great sacrifices and blood for the sake of the country,” Sayyed Nasrallah stressed , pointing out that “in the battle against corruption, we can’t stand idly by in order not to irritate some parties.”

He went on to say: “In the battle against corruption, we consider ourselves to be in a righteous, important and sacred battle i.e. not less important than resisting the occupation.”

As Hezbollah Secretary General  warned that “any financial collapse represents an existential threat,” he underscored that “it is totally baseless that we seek political vengeance from fighting corruption.”

“We are not after increasing or diminishing popularity, but rather our goal is facing financial waste, ending theft of public funds and confronting financial and administrative corruption,” he declared, noting that Hezbollah isn’t “in competition with anyone in this battle and we do not agree to enter into a bidding war with anyone.”

Moreover, Sayyed Nasrallah clearly announced: “We support anyone who makes a move in this battle. We are with anyone who has evidences in the files of corruption and financial waste and submits them to the state we .We don't want to be alone in this battle but we aren’t afraid to be alone.”

Expressing caution that “there are attempts to turn the battle over corruption into another sectarian path to protect the supposed corrupted people,” Sayyed Nasrallah sent a sounding message to the rivals: “Do not bet that we’ll be tired. Do not bet that we will despair. We haven’t been tired in the battle of the resistance since 1982 and we are today in 2019 and now the resistance in face of corruption started.”

“Their claims that we are seeking political vengeance against certain politicians and parties is untrue,” His Eminence said, urging “anyone who has evidence against us can resort to the judiciary.

In addition, Sayyed Nasrallah mentioned: “We are only keen on the ultimate goal and we seek no political gains. We want to recover the state's funds. We know that the battle is difficult and we do not expect results within months. We do not care about insults and accusations and we’re used to them. The language of insults increases our resolve, strength and determination.”

“Do not bet on our fear of a civil war to silence us or make us retreat,” he said, telling “those doubting this battle, ‘we won’t stop, we’re going to the end’. You can think about everything and expect from Hezbollah everything in this battle.”

According to His Eminence, “A suspicious financial situation has persisted between the years 1993 and 2017.”

“A number of finance ministers have been into this ministry since 1993 to 2017 but one person went out and set himself as suspect,” he explained, unveiling that : “The second file is the useless debt and the large part of this money that goes to the pockets.”

Viewing that “the remarks by the Finance Ministry's director general are serious,” he urged “the Lebanese judiciary to inspect them.”

Moreover, he rejected the claims that Hezbollah was setting its sights on Lebanon’s corruption problem only because “it is coming back from Syria” and has nothing better to do.

“Trust me, no one has as much work to do as us,” he said, hailing the fact that Lebanese President “General Michel Aoun was the first to tackle this file prior to being elected president.”