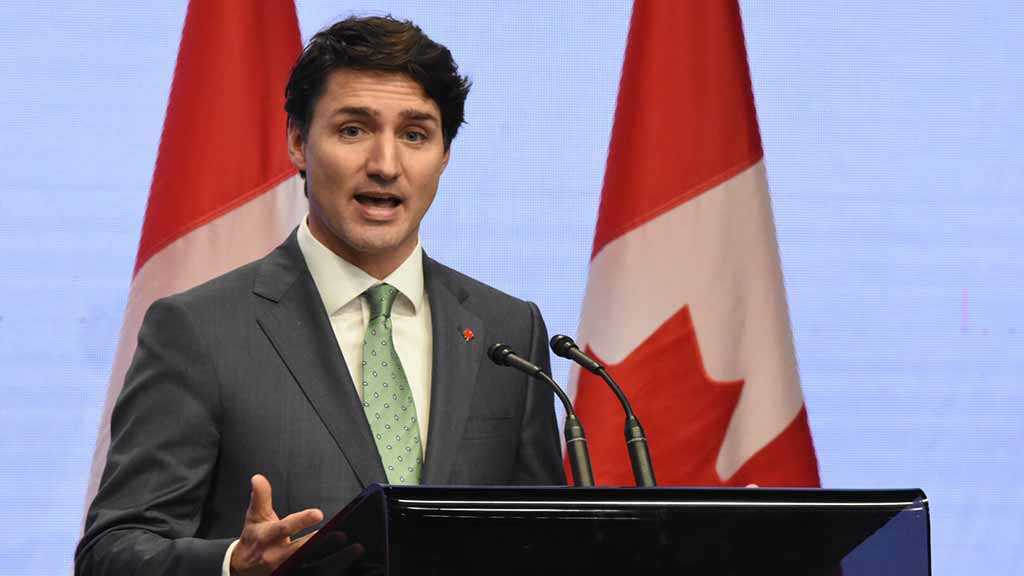 Canadian Prime Minister Justin Trudeau on Thursday denied accusations of "inappropriate" meddling in the prosecution of a corporate giant, as the country's golden boy leader battles his worst crisis since taking office.

Facing calls to resign over the snowballing scandal, Trudeau addressed the allegations head-on in a morning press conference in Ottawa -- saying he had learned "lessons" from the crisis, but denying any wrongdoing.

The case has already triggered the resignation of Trudeau's right-hand man and two cabinet ministers, with support for the beleaguered prime minister and his Liberals falling for the first time behind the opposition Tories, seven months from a general election.

Addressing the media, the 47-year-old premier acknowledged he raised the pending trial during a meeting last September with then attorney general Jody Wilson-Raybould -- whose resignation touched off the crisis. He said they discussed its possible impact on jobs in his Montreal electoral district.

"But," he said, "This comment was not partisan in nature."

During days of testimony before the House of Commons justice committee, Wilson-Raybould told lawmakers she experienced "consistent and sustained" pressure from Trudeau's inner circle to interfere in the case, including "veiled threats."

"There was no inappropriate pressure," hit back Trudeau, who stood by his previous claim he made clear to Wilson-Raybould any decision was hers alone.

The prime minister did take some responsibility for the breakdown of relations between his office and Wilson-Raybould, Canada's first indigenous attorney general who claims she was shuffled out of the justice ministry over the case, and who eventually quit the government last month.

"As we look over the past weeks, there are many lessons to be learned and many things we would have liked to have done differently."

"I was not aware of that erosion of trust. As prime minister, I should have been," he said, vowing to "do better next time."

But he also added, Wilson-Raybould also should have been more forthcoming with her concerns. "She did not come to me and I wish she had," he said.

The Montreal-based SNC-Lavalin was charged with corruption several years ago for allegedly paying Can$47 million (US$36 million) in bribes between 2001 and 2011 to secure Libyan government contracts under the rule of Moammar Gadhafi, and of defrauding the Libyan government of Can$130 million.

The charges relate to the world's largest irrigation scheme -- the Great Man Made River Project -- to provide fresh water to the cities of Tripoli, Benghazi and Sirte.

SNC-Lavalin openly lobbied the Canadian government for an out-of-court settlement that would mean paying a fine and agreeing to compliance measures.

A conviction, the company argued, risked crippling its business and putting thousands out of work, as it would be barred for 10 years from bidding for federal work.

Wilson-Raybould refused to ask prosecutors to settle, and the trial is set to proceed.

But in testimony before the justice committee, Wilson-Raybould said members of Trudeau's inner circle continued to "hound" her from September to December last year, after she made known her decision not to offer SNC-Lavalin a deal.

She named 11 government officials, including longtime friend and former principal secretary Gerry Butts, saying they "urged me to take partisan political considerations into account, which was clearly improper."

That pressure was not illegal, she said, but "raised serious red flags in my view."

Butts, who has resigned over the scandal, told lawmakers Wednesday he was "firmly convinced that nothing happened here beyond the normal operations of government."

Trudeau meanwhile characterized the interactions as "conversations among colleagues about how to tackle a challenging issue," involving a possible loss of up to 9,000 Canadian jobs.

"We considered that she was still open to hearing different arguments and different approaches on what her decision could be," and so "my office continued to have the conversations at different times with her."

"What we see now is that she wasn't prepared to change her mind," he concluded.