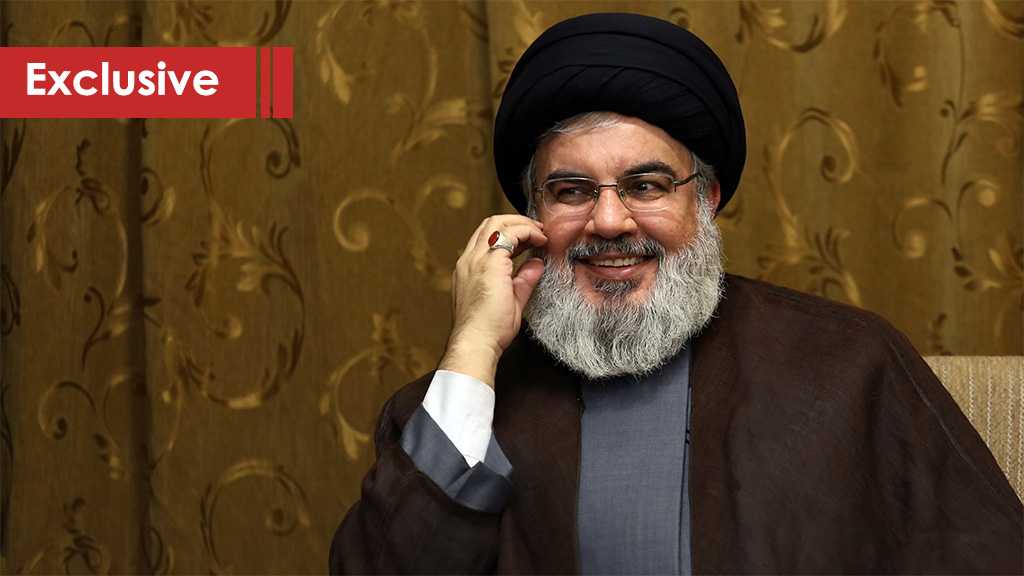 "We devote this evening to Hassan Nasrallah, not for the love of him; but because he is our toughest enemy, and the most wonderful of all. Hassan Nasrallah turned Hezbollah into one of the strongest and richest 'terrorist' organizations in the world. There is no Arab enemy who inhabits the “Israeli” public like Hassan Nasrallah. He has received our attention like no other other leader of an Arab state. And we, the “Israelis” listen to him and believe him. The Secretary General of Hezbollah knows this and exploits it in an excellent way to instill fear in us to the extent of terror." With these words, Guy Zohar presented ‘The Analysis of Nasrallah’ documentary.

From an underground location, using a state of the art camera and shifting between the studio and documented scenes of the Secretary General of Hezbollah in the open, “Israel’s” Channel 11 aired the documentary. Those being interviewed were dressed in black with a dominant dark background. Meanwhile, the historic scenes of Hezbollah’s secretary general varied in time, background and occasion. The selection of the segments showed courage, strength and the firmness in his stance as well as the extent of the depth of his Eminence’s words and positions in the consciousness of the Zionists, contrary to what the producers of the documentary intended to show.

Ehud Olmert, Ehud Barak, Moshe Ya'alon, media specialists as well as military and security experts all agreed that Sayyed Nasrallah knows the most accurate details of their usurper entity. He employs events to deduce the accuracy of his opinion and logic using excerpts from the aforementioned officials themselves.

Olmert and Falling into Nasrallah’s Trap

The first person interviewed following the introduction was former Prime Minister Ehud Olmert, the most prominent loser in the Second Lebanon War and a convict serving a prison sentence on corruption charges.

"We fell into Nasrallah's media trap. We made a mistake broadcasting his speeches during the 2006 war as if he was our foreign minister and our prime minister, allowing him to instill doubt in us," Olmert said.

This statement follows several “Israeli” surveys. Those surveyed confirmed that they believed Sayyed Nasrallah more than the leaders of the entity because he always tells the truth.

Olmert also spoke of Sayyed Nasrallah following-up on events. He referred to Sayyed’s famous Spider Web speech on the occasion of the 2000 liberation in the town of Bint Jbeil.

"The disillusioned and disorganized withdrawal from Lebanon in 2000 was the basis of the Spider Web speech delivered by (Sayyed) Nasrallah," Olmert said.

Then one of the experts involved in the investigation explained that, "Nasrallah succeeded in appearing before the Arabs as the one who expelled the occupation from his land in 2000. He was the greatest victor."

Barak: Nasrallah Should Not Be Underestimated

According to former “Israeli” Prime Minister, Minister of War and the one defeated in Lebanon in 2000, Ehud Barak, "Nasrallah, without a doubt, represents another kind of enemy for “Israel”. He is a leader with good political skills and should not be underestimated."

The former Northern Corps commander, Eyal Ben Reuven, echoed Barak’s sentiments saying, "He is a bitter and harsh enemy. He is worthy of appreciation. He is a bookish man (educated). He studies us and knows us."

Yaalon on Sayyed and Hezbollah being Lebanese

Former “Israeli” War Minister Moshe Yaalon dealt with Sayyed Nasrallah’s personality in terms of identity, belonging and action. He focused on Sayyed’s achievements in gaining international legitimacy as well as legitimacy in Lebanon for resistance’s operations against "Israel". He also talked about the strategy Sayyed used to confirm this identity saying, "Nasrallah firmly stigmatized our presence in Lebanon as an occupation and continued repeating this description ... occupation .. occupation."

He also referred to the special capabilities His Eminence possesses.

"Certainly, when we were in the security belt, we realized that he is an enemy that understands us more than others. He is intelligent. He knows how to exploit our disadvantages to his advantages. He works admirably. He is intelligent in all fields," Yaalon added.

The Zionist experts continued to talk about Sayyed’s creativity in guiding the media in how to “broadcast fighting scenes. No organization has reached the level that Hezbollah did in this area."

As for Sayyed not sending his martyred son, Sayyed Hadi, to university, this point was intended to be disgraceful. However, it turned to Sayyed’s favor. Sayyed Hadi’s martyrdom in the field discredited all other narratives about his fate. One commentator said, "Nasrallah is not a leader who sent his son to foreign universities, but he sent him to the battlefield."

The Zionist experts did not reveal anything new about Sayyed Nasrallah's knowledge of the usurper entity, its structure and the ways its leaders think. Colonel (Res) Ronen Cohen, the head of the so-called Terror Arena in the production division of the Intelligence Directorate, revealed that, "there is no one who studied the enemy the way he did.”

“If you wanted to be victorious, you have to know the points of weakness and study them from all sides," he said.

This is another confirmation that what bothers the Zionists is an Arab superiority over them. This is different from the image of the Arabs in the “Israeli” media and consciousness.

As for what Sayyed Nasrallah thinks about the future of the usurper entity, the deputy commander of the Northern Corps in the reserves unit, Chico Tamir, exclaimed that "Nasrallah had a great understanding that victory would not be achieved in the valleys of southern Lebanon. He will be triumphant in the consciousness."

In this context, the experts addressed what the enemy’s media called the excess of power in the resistance society, noting that Sayyed Nasrallah "worked to build a strong society and rose with it."

They revealed that at a time when Sayyed knew everything about them, "we did not know anything about Nasrallah." Writer and expert on Arab affairs, Avi Issacharoff, added: "Nasrallah is the biggest threat to “Israel” today in the Middle East." The presenter of the program Zohar concludes, "With time we understood the power of this person!"