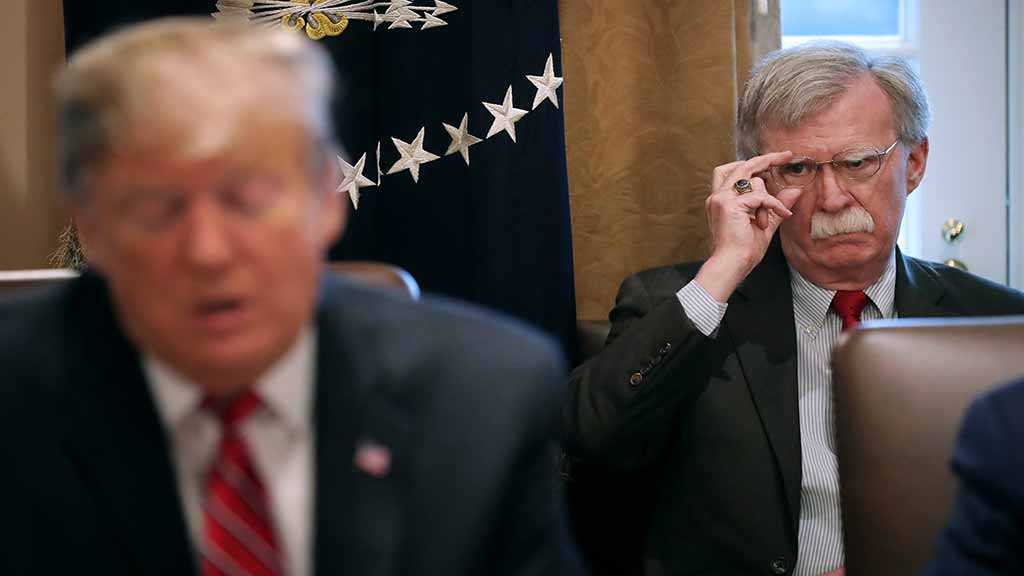 According to recent revelations, because of efforts by the US national security adviser, the grave decision to pull-out of the Intermediate-Range Nuclear Forces (INF) Treaty was made without consulting with any departments or agencies.

US National Security Adviser John Bolton has gained major influence on the decision-making process in regards to foreign policy, sometimes deciding what President Donald Trump needs and doesn't need to hear, The Washington Post reported, citing "over a dozen current and former administration officials", who preferred to stay anonymous.

According to the sources, Bolton reduced the number of meetings of top national security meetings on crucial foreign policy issues to a "bare minimum" and replaced numerous specialists in the National Security Council (NSC) with non-specialists who share his hawkish views. He reportedly also spends a lot of time trying to influence Trump's decisions and is often seen "sprinting to the Oval Office" as soon as the president shows up in the morning.

The reduction of high-level meetings has led to situations that one former official involved in the discussions on Syria called "the wheel doesn't connect to the engine". As a result, some of the Cabinet's officials started working on developing their own personal communication lines with the president to avoid being cut out by Bolton, as Mike Pompeo has done, who "guards his 'alone time' with Trump", according to the newspaper.

Another change to the way that the NSC operates that came with Bolton's appointment was a shift away from a policy of the "door is always open to office door is always closed", in terms of the ability of NSC staffers to discuss policy issues with the national security adviser, The Washington Post wrote, citing a source. Bolton reportedly mostly relies on "soul mates" that he brought to the council's departments responsible for policies on the Middle East, Iran, North Korea, and China —foreign policy spheres that he has always been interested in and in which he has always held hawkish views.

As a vivid example of how his approach to his position has affected the decision-making process, the newspaper brings up the US withdrawal from the INF Treaty. According to sources, the decision was never even discussed by the so-called "principals committee", which includes the war secretary, secretary of state, treasury secretary, and attorney general.

At the same time, NSC spokesman Garrett Marquis insists that it is "incorrect to say that there are fewer meetings overall", as some of them have simply been replaced by "paper meetings", where top officials simply exchange policy documents. On the other hand, even former Secretary of War Jim Mattis, who was reportedly irritated by the multitude of meetings organized by Bolton's predecessor, H.R. McMaster, has said that the scarcity of top brass meetings crippled the policy-making process.

The US first announced its decision to withdraw from the Intermediate-Range Nuclear Forces (INF) Treaty in October 2018, citing Russia's alleged violations of the accord. Despite Moscow's attempts to clarify the situation regarding missiles that raised concerns in Washington and efforts to show that they were in compliance with the INF, the US announced the commencement of the withdrawal process in February 2019. Moscow responded in kind, also announcing its withdrawal.

The INF Treaty, which was signed in 1987 by the US and the Soviet Union, bans all ground-based missiles and their launchers capable of hitting targets at ranges between 500 km and 5,500 km.

However, The Washington Post noted that Bolton is still not all-powerful when it comes to changing Trump's mind, as was demonstrated by the latter's efforts to improve relations with North Korea and achieve denuclearization on the Korean Peninsula.

Another example that the newspaper brought up was the military withdrawal from Syria. This decision came as a surprise to Bolton, who insisted that American troops would remain until Iran pulls out forces that it allegedly has in the Arab Republic. Bolton reportedly spent several days trying to dissuade Trump from the withdrawal, but without success.

This is not the first time that Bolton is suspected of manipulating the flow of information to his superiors. Colleagues of his from his time as a State Department undersecretary who, were interviewed by The Washington Post in 2005, claimed that it was commonplace for him to withhold memos that didn't coincide with his own political views.

Specifically, he left former Secretary of State Condoleezza Rice uninformed about the lack of support among European countries for the Bolton-promoted initiative to oust then Director General of the International Atomic Energy Agency (IAEA) Mohamed ElBaradei, whom Bolton considered to be "too soft" on Iran. The dearth in support came as a surprise to Rice during her first European tour.