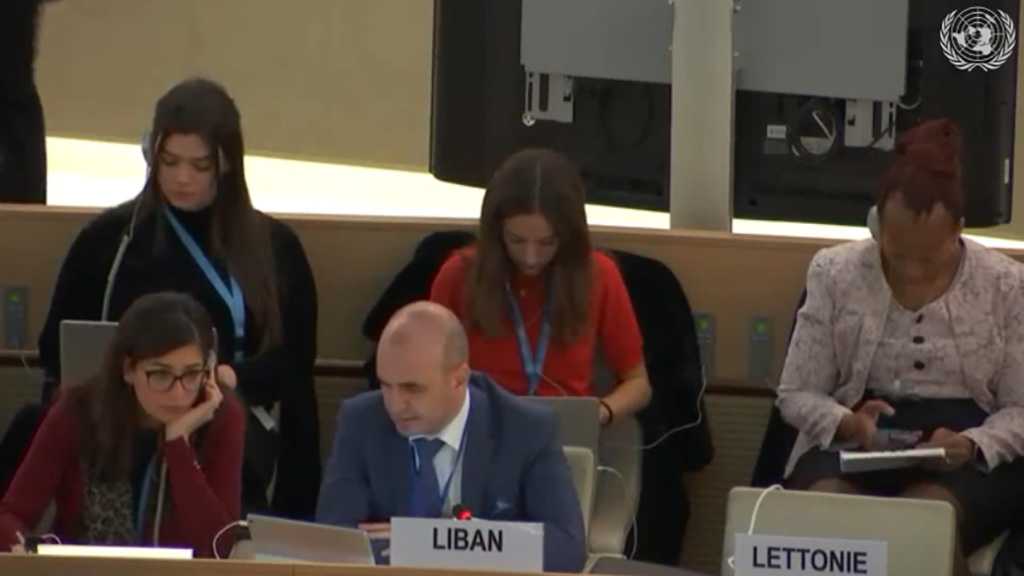 Following is the response by Lebanon’s envoy to the United Nations Human Rights Council Mr. Salim Baddoura to the ‘Israeli’ delegate’s comments regarding proscribing Hezbollah as a ‘terrorist’ organization.

"This reply comes in response to the delegate of ‘Israel’:

As usual, ‘Israel’ is making use of the deliberations of this council to hide behind the guise of the peace-loving and democratic victim, given that all its history and practices in our region affirms the opposite.

The consistency of ‘Israel’ to change historical facts and to disseminate falsehoods and to accuse each and every one who is bold enough to confront its terrorist land occupation only deceives those who do not want to acknowledge the truth, and that is because of the political reasons.

Is there any wise person who would believe that a power that came to being by occupation, colonialism and settlement can form a model for democracy?

‘Israel’ has been throwing accusations against Lebanon on no grounds as per the fact that it is ‘Israel’ that occupies our territory in the south.

They, on a daily basis, violate our land, sea and air sovereignty and throws threats against our people menacing us to bring us back to the Stone Age.

All these violations are documented in the United Nations reports about the implementation of resolution 1701 of 2006.

We also would like to draw attention to the fact that Hezbollah is a major Lebanese party with representatives in the Lebanese Parliament and the Lebanese Government.

We reject describing it as terrorist only because it is resisting ‘Israel’ that so far is occupying Lebanese and Arab territories.

In addition, Hezbollah is not enlisted by the United Nations as a terrorist group."