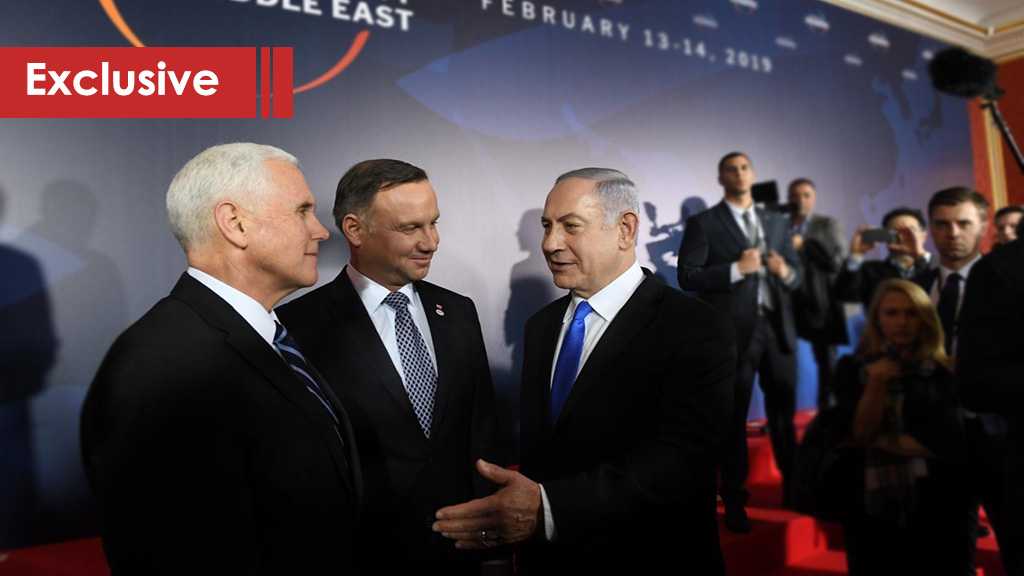 I wasn’t waiting to see if the Arabs participating in the most recent US charade against the free world would exchange Valentine’s love cards with the “Israelis” or not. That is something only a person who is acutely naive would doubt. I just wanted to see if they did it publicly or not. After all, the bosses of Pence and Pompeo are the same ones who need to ensure that the bloodthirsty Netanyahu continues his rampage against Palestinian children and that can only be accomplished by getting him to win elections, the results of which would be almost secured if the scandal-plagued Zionist PM proves to the settlers that he’s opening Arab airports for them.

One way or another, the “Israeli” media was going to celebrate candlelight dinners between the lords of Petroleum and the PM who, not so long ago, was shown on video speaking openly about the US public opinion being his to manipulate. They, the “Israeli” newspapers and TV stations, leak such news frequently. And, unfortunately, this is one aspect where public deception is not the case.

It is all related to Venezuela, whose legal president, Mr. Nicolas Madura, has proved that it is possible for a Latin to be more Arab than many of those who wear the traditional Dishdashah. Actually, more humanely correct and closer to the philosophy of Islam than most of them. Mr. Maduro and the brave people of Venezuela are living proof that the gap between Christianity and Islam is nonexistent when it comes to right and wrong.

The major Latin American nation has been subject to enormous pressures by the US for as long as we can remember. The Venezuelans’ natural tendency to refuse being dictated to has led them to be on the blacklist of the CIA; they are simply too proud to receive late night phone calls from some American ambassador and this is just unfathomable to the agency that orchestrated the infamous Operation Condor. They want to control Venezuela’s natural resources and its politics.

Nevertheless, it has become obvious that the objective behind the insistent campaign to destroy the very foundations of Venezuela and starve its citizens goes beyond wanting to turn it into another puppet state.

The graduates of Kissinger’s school of political terror have found that bringing a nation like this great Bolivarian one with all its top natural and human resources to its knees would serve as a lesson to the Arab leaders who were still hesitant regarding being seen in the same room with “Israel” and Cupid. If the CIA can starve the Venezuelans into overthrowing a government that says NO to imperialism, then the same could be done with the dictators of the Gulf region. It’s a very simple concept: Forget the Palestinians or we will bring someone in your place who would.

The exaggerated “Israeli” flag portrayed during the separatists’ demonstration in Venezuela was a signal to Arabs preparing to fly to Warsaw. Pompeo probably authorized the $10 payment to each person carrying it while planning the shameful seating arrangements for the summit along with the comical little microphone act that was staged.

Iran has been subject to crippling embargos for the past 40 years; high-quality medicine is not only produced there, but it is also affordable by everyone. There is no fear of falling sick in the Islamic Republic and not finding the proper medical attention for free. Even dental care which is not covered by insurance in so many so-called first world countries is available free of charge in centers around the Iranian capital. This is just one simple example of what an anti-imperialist government gives to its people.

President Maduro realizes this and so do the majority of his people. There is no doubt that Venezuela will pull through this ordeal and it will do so by primarily sticking to its high ethical standards in international affairs and then by keeping its close relationships with the countries supporting real independence and freedom of choice.