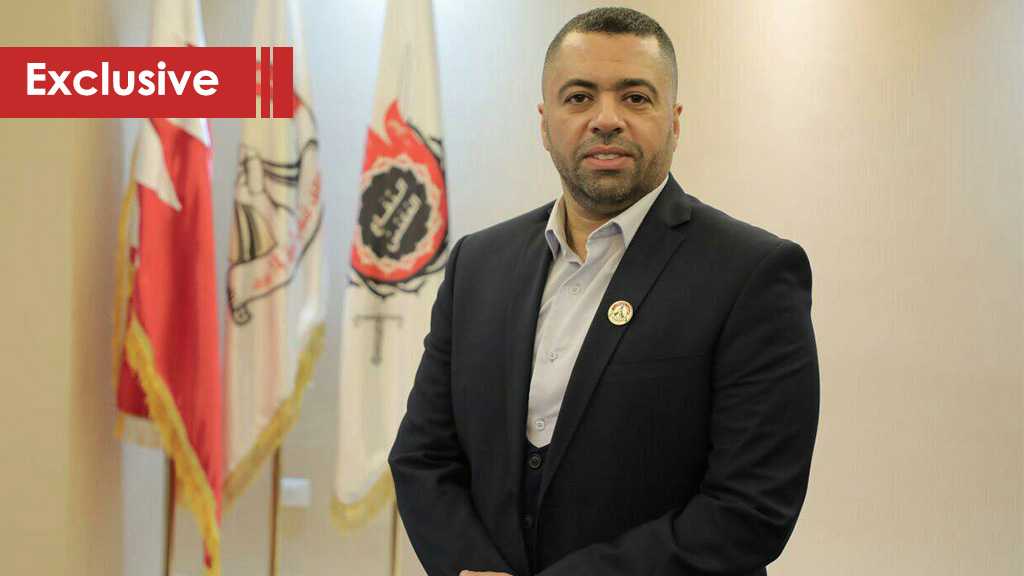 Eight years ago, Bahrainis rose up with the simplest rightful demands of their basic rights; their uprising was not like any other. It was that of roses turned into blood.

Like no others, Bahrainis decided that their protests be peaceful no matter what. Even with this decision, they were faced by brutal killings, torture, detentions and humiliation by the regime that proved again unqualified to control a civilized nation.

In a special interview with al-Ahed News ahead of announcing the political document by the Bahraini February 14 Youth Coalition, Dr. Ibrahim Al-Aradi, the Head of the coalition’s Political Bureau based in Beirut talked the revolution, its past, present and future: 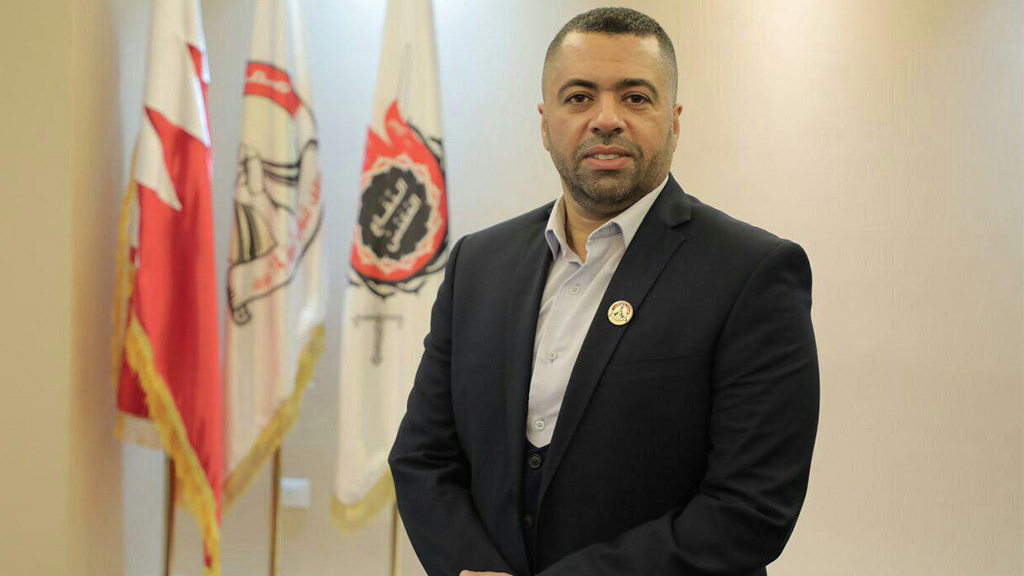 8 years after the Bahraini popular protests, it became clear that the protest is not only of the time being, emotional or sectarian as the Saudi and Emirati oppressive regimes claim, he said.

The protest originates from the depth of the Bahraini demands, their pains, the old generations, in every decade there has been a revolution. Revolutions are extended because there is a struggle in Bahrain since more than 200 years between the successive oppressive ruling parties in Bahrain and the people, who have been deprived over years from their simplest rights. Until the February 14, 2011 revolution, our life has changed because of the decision we have made, to move from repression to freedom. Most of us, even the families of martyrs, believe that this revolution is last one, especially after exposing the ugly face of the regime, the economic failure. Hamad bin Isa Al Khalifah assumed control by force, lied to the people and abused their kindness, simply speaking.

Since assuming control in 1999 – 2000, and the process of granting political citizenships started, as well as his fake parliament that falsifies truths in Bahrain, the tiny country. Those granted citizenships in Bahrain became very obvious, everybody sees them. It became clear that the regime was planning for far worse things. Apparently, it dissolved the national security agency, the place of torture. However now, after 2011, the security agency still exists. It is the place were all male and female activists are being tortured. We, in the February 14 Youth Coalition, with all our members, decided to endure in the face of the regime and expand this movement by studying the field and regional situation. We understood that the Bahraini regime won’t bring any good to the people, so we raised the slogan of the right to self-determination. We chose the Pearl Roundabout as a center for our protests. They damaged it to damage the symbolism of the sit-in. Soon after, our youth didn’t compromise. There were unprecedented detention campaigns even in the Gulf countries. Here came the isolation between the ruling party and the Bahraini people until the popular decision was made for non-stopping massive popular protests.

We were working to live a dignified life in our country. It is not an easy thing that an honorable Bahraini national be humiliated. It is not easy to be humiliated by a tyrant ruler.

Eight years of the revolutions have changed many things. Today, the political rejection is clear for everybody. Yes, there are American and Emirati weapons in the hands of the Al Khalifah regime, it is the power of the official weapon controlling the country to kill democracy. They are covered by the American and British decision, but it is the people who grant sovereignty.

"It is the people who make the decision, and it them who are the source of authorities."

This is why the right to self-determination can identify the people’s demands including the political regime, parliament and government elected by them.

The February 14 Youth coalition everyday has an activity, especially now the activities are intensified. There is disobedience and boycott, this is how we show people that we are a civilized people. We are accused of ‘terrorism’, but when you see our people, our ladies, and the activities we make all over the country, is the Bahraini people a terrorist people? It is the regime which is terrorist, ruling the people with an iron fist. The youths of the coalition in all towns and villages of Bahrain have announced a status of civil disobedience and raising their voices with the demands they are seeking to reach the western public opinion as they are.

On the eighth anniversary of the revolution we stress that we remain firm in our positions, and we further announced the establishment of our Political Bureau in Beirut. The regime in Bahrain wants to show the public opinion that is has won the Bahraini people on the political level, it has not. On the field level, the youths are still defending their Bahraini towns and villages.

The regime tried to make lies regarding the situation and it came with the Zionist entity’s correspondents to the country for this purpose. It has failed, and now it was shocked with our first public and official appearance as a political bureau for the February 14 Youth Coalition. This is of a great significance. Since the very first hours of announcing the news, the regime went mad. And now, our responsibility is to raise the voice of this cultured youth to the world. They are among the finest elite of Bahrain. And the terrorist is the regime that is accusing them of this.

The regime is trying its best to fight us on every level, even the political one, spreading lies and fake news regarding our political activism. But this, however, won’t be taken seriously by anybody.

Did the absence of Ayatollah Qassem affect the movement?

His Eminence, the father and cleric Sheikh Isa Ahmad Qassim has never been absent from the field, neither on February 14 nor before it. Since the 1970s, our father and role model Sheikh Qassem is present in our conscience, may Allah grants him good health and well-being. He was patient during his sickness, and during the siege as he was seeing the bodies and body parts of the martyrs in front of his house, but didn’t make any political compromise. The goal was to force him to compromise to the regime on the political level, which he had never. Now, his presence outside the country will ignite the movement again. When he issued his first statement in which he urged the Bahrainis to continue their path and revolution, calling them the cultured people, it represented a cover for all of them. This is why the Bahraini revolution will continue because Sheikh Qassem is a national symbol that has never been absent from the arena.

“What was founded by Sheikh Isa Ahmad Qassem over decades is able to give eternal pulse to this arena.”

We tell the international community that it became clear for you now, even in the case of Bahraini footballer Hakeem al-Araibi, that even the Thai regime, the best ally for the Al Khalifah regime, didn’t trust them and that Hakeem returned to Australia after Australian mediation. The international community knows that the Al Khalifah regime is a dictatorial one that is not elected by its people. It rules by the force of machines. We tell them “you see this people every day, why do you deal with double-standards? Why don’t you treat all people the same? You claim democracy and human rights, why do you support them from under the table. You are contributing (in the suffering) and the game has been exposed. There is an entire people that wants its right to self-determination. They want to sleep but don’t wake up to oppression, detention, displacement, revoking citizenship or anything other. This is what the international community has to do instead of issuing the statements that the regime has been used to.

The February 14 Youth Coalition represents a major part of the Bahraini people, we represent the voice of the field and you have to listen to us because there is no stability or settlement in Bahrain if the regime continues to rule with this tyranny, revoking citizenships and  detention…

“You are the patience of the revolution.”

Every Bahraini who demands rights today is subject to arbitrary detention. We tell them that we won’t stop demanding their release, and that their patience is the reservoir of this revolution.

The regime now knows very well that it doesn’t enjoy any popular legitimacy and that its rule is only figurative. It is afraid to open the door to any legitimate elections or a popular referendum because it knows that the people will choose those who are qualified to be in power. The people won’t elect those who killed and executed the elite of our people in Bahrain.

“This regime that is involved with the Zionist entity is not qualified to rule the Bahraini people. We tell you that killing, torture, revoking citizenships and forcing people out of their homes won’t bring you any stability.”

The coalition and all other forces in the nation stress that we won’t submit. The field is our back, as well as the wisdom of our people and leaders. We won’t accept that the regime continues to survive on our backs.

“Any settlement will be topped with the right to self-determination,” Dr. al-Aradi concluded.

Someday, the voice of justness will be heard. Love it or not, it is something no one can argue about. no matter how much time passes, justness will always prevail...