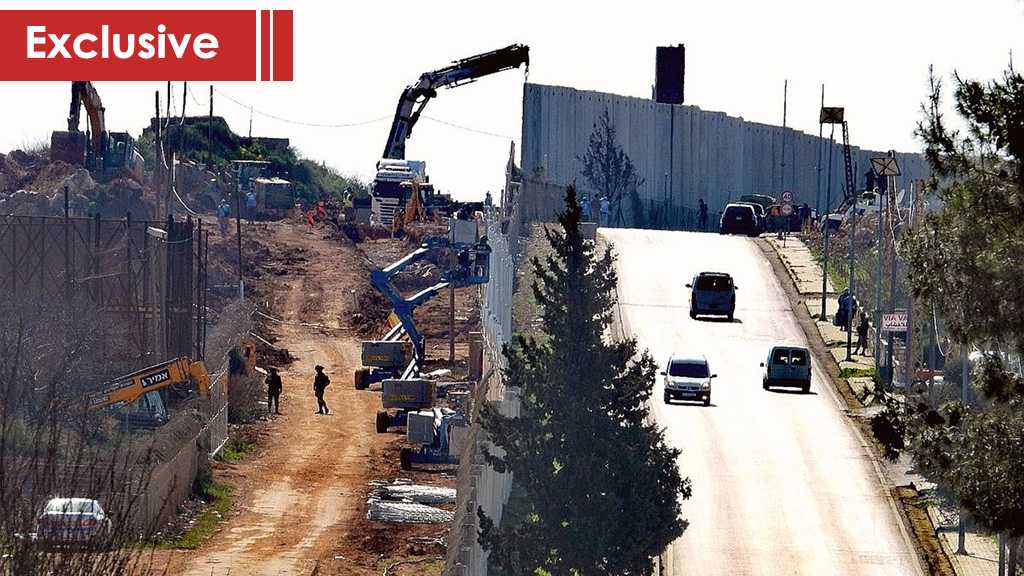 Obviously, the Zionist occupation army is saying that the construction work is being done on “sovereign ‘Israeli’ territory” which according to international law is false because ‘Israel’ is occupying both Lebanese and Palestinian land. However, allow me to demonstrate how Zionist ‘Israel’ is not only lying about the matter but also actively stealing more Lebanese land on the southern border with occupied Palestine.

The illegal concrete wall that the Zionist entity is building passes through territory that belongs to Lebanon which is located on the Lebanese side of the U.N. designated Blue Line, which demarcated ‘Israel’s’ defeat and withdrawal from southern Lebanon in 2000.

In the year 2000, the first United Nations draft of the Blue Line appeared, varying in 13 points with the Final Delimitation Agreement of 1923, which was also approved by the 1949 ‘Israeli’-Lebanese Armistice Agreement with an area of 485,039 square meters along the Blue Line, extending for 114 km from the occupied Shab'a farms to the town of Naqoura.

At that time, Lebanon voiced its rejection of this line through the Lebanese committee headed by General Amin Hoteit who presented his remarks about the Blue Line to the United Nations. As a result, the UN decided to withdraw its line in 10 points, and to maintain 3 points in Rmeish, Adaisa and Metulla villages.

Lebanon held on to its right in those points. This showed a new reality that the international line should be amended in those 10 regions, while keeping the Lebanese reservations to the remaining 3 areas, provided that the situation on the ground remains the same, meaning that ‘Israel’ is not allowed to alter or change anything at these 3 points.

In this context, it is noted that the Blue Line does not in any way represent an international border, but merely aims to verify the ‘Israeli’ entity’s withdrawal from Lebanon in 2000.

A brief look at a map of the frontier between Lebanon and occupied Palestine and you will see a knot of dotted lines that cut inexplicably through villages and farmland. These lines were supposed to be temporary, but they stand as a monument to decades of unresolved conflicts between Lebanon and the ‘Israeli’ entity.

For some time now, the ‘Israeli’ occupation forces have been building a concrete wall in these 3 "reservation points", specifically in front of the town of Adaisa. By adding cement units to the wall, ‘Israel’ is violating what was previously agreed upon at those points.

Furthermore, in the Mountain of al-Bayadah, which is located within the Naqoura area and is considered among the disputed 13 points, the ‘Israeli’ occupation forces are moving the security point from a mountain inside Lebanese territory to areas of "geographical impediment" for security usages by the ‘Israeli’ enemy.

This move is a systematic and illegal "rock drilling" operation for the mountain by the ‘Israeli’ occupation forces who also destroyed approximately 500 square meters of agricultural land planted with olives in al-Bayadah area.

In conclusion, the ‘Israeli’ enemy is not only trying to breach what has been agreed upon for the 3 "reservation points", but also actively going back to the situation before Lebanon submitted a complaint to the UN to retract its decision about the 10 points which Lebanon clearly rejected.

Zionist ‘Israel’ violates Lebanese airspace on “a daily basis” and still occupies internationally recognized Lebanese land. Now they are erecting an illegal concrete wall on our land while the international community watches like a deaf mute observer. However, according to the Lebanese constitution and article 51 of the UN charter, which recognizes a right of self-defense, Lebanon preserves the right to defend its land from being stolen again by the armed and aggressive ‘Israeli’ occupation forces. Lebanon is a member of the United Nation and we as a nation have the inherent right of collective or individual self-defense if and when an armed attack occurs against us and what ‘Israel’ is doing at our border as we speak is nothing short than an armed attack.

Lebanon preserves the right to defend itself as per the government’s ministerial policy statement that adopts the tripartite equation: “The Army, the people and the resistance” as a means of facing any possible ‘Israeli’ attack on Lebanon. The illegal cement want will not stop Lebanon from defending its land from ‘Israeli’ theft.

No matter how high Zionist ‘Israel’ erects that cement wall near the settlement of Metulla in the north of occupied Palestine, it will never block the site from the stolen Arab land. Just take a trip to the Lebanese village of Kafrkela and you can easily see the peaks of Al-Sheikh Mountain that appears to be connected to the sky. Just beneath Al-Sheikh Mountain, you see the western slopes of the occupied Syrian Golan Heights, which constitute a natural extension to south Lebanon, and north Palestine, joining with green fields, pine forests and scattered spines on either side of the artificial and temporary border.

There is no need to keep repeating how useless this concrete wall is in the face of geography, and that its builders are simply strangling their existence with walls of isolation while deceivingly selling it as means of protection to the northern illegal colonial settlers. Meanwhile, the leaders of the Zionist entity and its occupation forces have no doubt that when the Lebanese resistance decides to enter the Upper Galilee, it shall do so without any hindering within 15 to 20 minutes in broad daylight above the ground and not beneath it