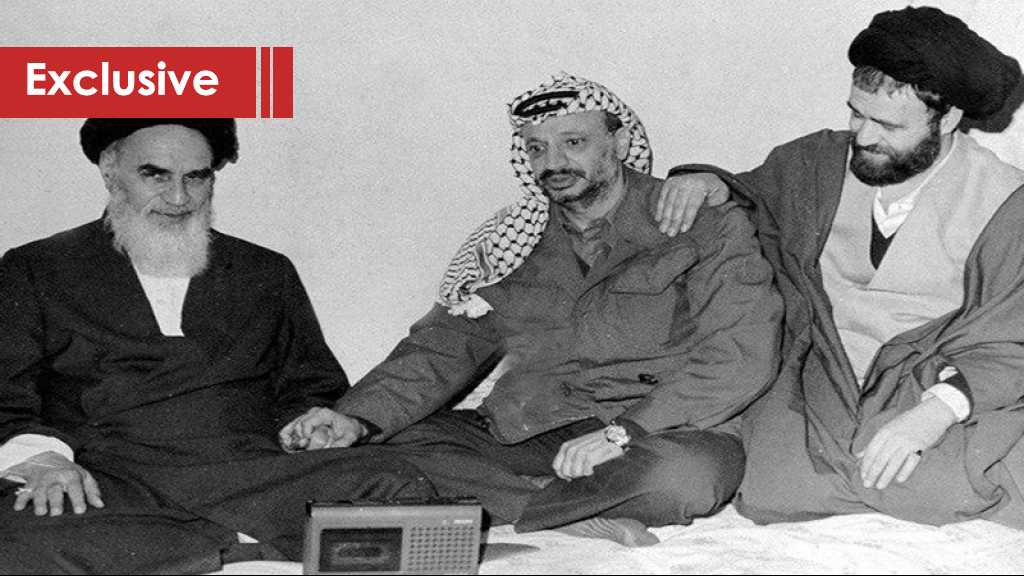 The above is an objective laid out by Imam Ruhollah Musavi Khomeini following the victory of the Islamic Revolution in Iran. While the Shah’s Iran was the most prominent supporter of the “Israeli” occupation entity in the region, the Imam’s revolution constituted an actual uprising against this reality. The Islamic Revolution, which closed the door to relations with the US and closed Washington’s embassy, opened its doors at that time to the late Palestinian President Yasser Arafat. It opened the Palestinian Embassy in the Islamic Republic by removing the flag of the usurper entity and jointly raised the Palestinian flag with the Palestine Liberation Organization.

"In order to liberate Al-Quds (Jerusalem), it is necessary to take advantage of the machine guns that depend on faith and the ability of Islam, leave the game of politics that reeks of surrender and abandon the idea of appeasing the great powers," Imam Khomeini said.

From here and since the victory of the Islamic Revolution, Iran has been an essential supporter of the various resistance factions in occupied Palestine.

According to the leader of the Islamic Jihad movement in Palestine, Khader Habib, the Islamic Revolution has placed Iran squarely among those with a bias towards the cause of the Palestinian nation.

"Imam Khomeini's statements and terminologies such as when he said that “Israel” is a cancerous gland that must be eradicated so that the health of the region and the Arab and Islamic nation is restored overlapped with what the Islamic Jihad movement believed in the era of the start of the Islamic revolution in Iran. It is still holding on to these beliefs,” Habib told the Al-Ahed news website in an exclusive interview.

"After the revolution, Iran became a major supporter of the Palestinian resistance against the Zionist enemy," Habib added. "Iran realized under the leadership of Imam Khomeini and still does that the existence of the Zionist entity in the Arab and Islamic region poses a major regional threat and that efforts should be made to eradicate this cancerous tumor from the body of the nation."

He pointed out that Iran has maintained its biased policies for the Palestinian cause and is the main supporter of the Islamic and non-Islamic resistance in Palestine.

Habib also stressed that the Islamic Republic is a fundamental and unwavering supporter of the Palestinian cause.

"We never felt that this support was aimed at asserting dominance over the resistance factions or that it is conditional. Iran supports Palestine because it believes that Palestine must be returned to its people who should live in security before the existence of the Zionist project," he explained.

He explains that the deal of the century is part of the bid to  impose US, “Israeli” and Western dominance over the region.

"Everyone is targeted by the deal, including Iran and the Arab and Islamic nation. We are working to ensure its failure. It will fail due to the stability and resistance embodied by the Lebanese resistance, and all the resistance movements rejecting the “Israeli” and American hegemony as well as the Palestinian people who are spearheading the confrontation against the Zionist project,” Habib concluded.

For his part, member of the Political Bureau of the Popular Front for the Liberation of Palestine (PFLP), Kayed Al-Ghoul, applauded the Islamic Revolution for transforming “the region and Iran's pivotal role in it.”

Speaking to Al-Ahed, Al-Ghoul congratulated the Islamic Republic’s leadership, government and people on the 40th anniversary for the Islamic Revolution.

"One of the main features of the Iranian Revolution is the strict position not to recognize the Zionist enemy and to consider it an enemy not only of the Arab nation but also of Iran and the Islamic people. From this position, Iran defined its dealings and support for the Palestinian people in their struggle and quest to attain their full rights," he added.

Al-Ghoul explained that "Iran supported the Palestinians, not just politically or through the media, but in a material sense too. It supported the resistance forces facing the occupation with weapons and greatly strengthened the ability of our people and the resistance in the face of the enemy."

“We did not feel that there was pressure, especially on the popular front in the direction of adopting certain policies. Iran confirmed that its support stems from its standing alongside the Palestinian people and the forces of resistance," Al-Ghoul said.

According to the PFLP leader, "a common political position among the axis of resistance is the recognition of the seriousness of the deal of the century, which is aimed at liquidating the Palestinian people’s cause and its national rights. It is also aimed at paving the way towards a formal normalization of ties between [Arab] countries and the Zionist enemy. Thus, there are common political positions and coordination, but we have not reached a unified plan on how to address the deal [of the century]."

He concluded by stressing the “need to form a framework that includes the various forces in the Arab countries to create a front that confronts the deal of the century and is dependent on all our allies and friends, both in the axis of resistance or other forces at the regional or international level."