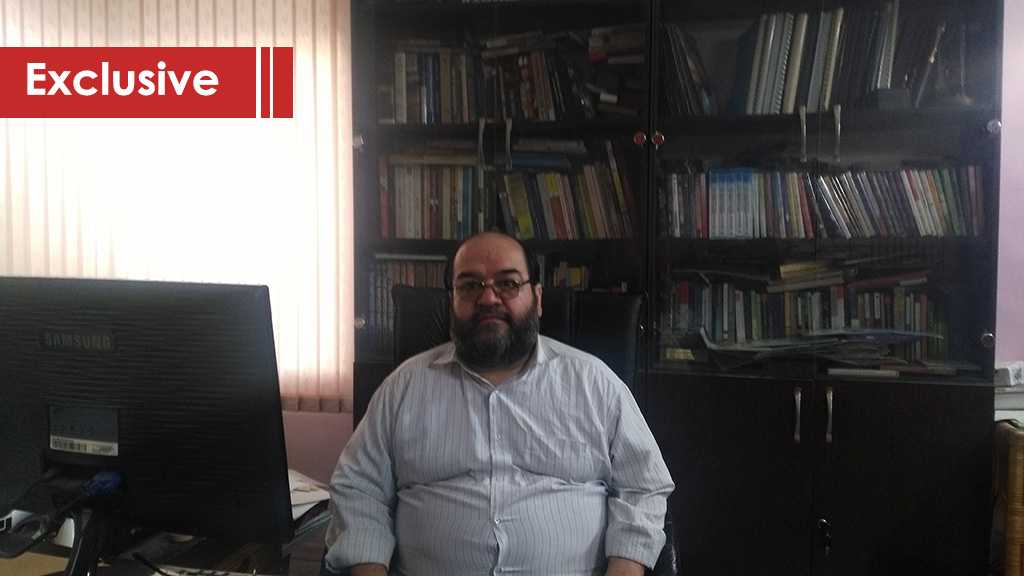 Iranian author: Imam Khomeini, women and peaceful protests are the essence of the revolution

Hamid Davood Abadi is an Iranian scholar, author, translator and writer. He began writing in 1987. He has written some 40 books, with his 2012 autobiography Az Meraaj Bargashtegan attracting the most attention. He witnessed the victory of the Islamic Revolution and participated in the holy defense war and has many stories that have not been documented yet.

The first thing Davood Abadi emphasized in an interview with al-Ahed news is the role of women during the Islamic Revolution.

According to the author, “People see the role of women in any revolution as a cliché and something repetitive. But especially in the Iranian revolution, this cannot be the case. Starting with Imam Khomeini, if his wife was not there to support him I do not think he would have been able to be the leader of the Islamic Revolution.”

He pointed out “Iran’s revolution differs from any other revolution that took place across the globe, and the reason is because the leader of the revolution was bigger and mightier than the revolution. Also, standing behind Imam Khomeini, I reiterate was his wife, who supported him day and night and this is a central point when we talk about the victory of the revolution.”

For Davood Abadi, when women take action, it spurs the men on, it doubles their strength or even bolsters it ten-fold, because men cannot simply stand by and watch as the women take action. Not only that, but also women turned the movement into a familial one, it was not the case that men went to protests and women and children stayed home. It was rather a movement where women, children and men poured into the streets; it was a real popular movement.

“I was 15 years old. My mother would wake us up in the early morning and prepare breakfast for all of us. My two brothers, my sister, my father and mother and I would recite our prayers and eat breakfast together. Then my mom would say let us get up, get ready and go together, we will go all together to the protests,” the author recalled.

He added “Many in the Iranian society would go as family to the protests and demonstrations. It was a social movement, a movement where mothers were the engine. I think that women constituted 50% if not more of the power of the revolution. Mothers, sisters, and wives were the ones who supported the men, encouraged them to go even though these women knew their husbands, brothers or fathers might not come back alive.”

Women also stood up to the regime, they voiced their ideas, participated in rallies, and became social activists. And alongside men they were arrested, tortured and even martyred for their cause.

An important reason to the victory of the revolution, as Davood Abadi describes, is the fact that “Imam Khomeini did not believe in an armed movement or revolution. He always believed that peaceful protests are the correct means for demanding reforms and rights. When the people change peacefully, everything around changes.”

He explained that “even though Imam was in exile, but he was able to communicate with the hearts of the people. He prompted them to change, he prompted people to differentiate between right and wrong.”

Davood Abadi recalled from the days when people decided to abandon sin and vice. “I still remember there was a bar and a cinema that would show immoral movies. Young people would regularly go there to watch vulgar movies and they would get badly drunk. These very same young women and men came down to the streets and destroyed the cinema and the bar; they are the ones who decided to change their lifestyle and change their entire existence in the country. These very same drunk people were the people of the uprising, they were tired of corruption and these became the martyrs of the revolution. The change was from within, from the people themselves.”

“I remember once when my mom stood facing a soldier who had his rifle pointed at her. It was the time when we had a military government. My mom simply and firmly told the soldier to put his rifle away, and that she is not out on the street to kill anyone. She was expressing her rights peacefully. She was so calm and firm and I believe that it was the revolution that gave her that strength. This revolution is for the people and by the people. And I think it is sort of a cycle; the revolution made women strong and powerful, these women supported men which made them in their turn powerful, and eventually there was an entire society so powerful and peaceful simultaneously that was seeking reforms and change for the better.”

Davood Abadi told al-Ahed news that for Imam Khomeini, it was essential that the revolution continues to be peaceful and that there is no justification for violence. “There were numerous political groups, and protests would take place in all the provinces. One of the political groups at that time was the Marxist group of Khalq, who in fact were the ones to attack the US embassy in Tehran with arms. They started shooting at the embassy, but Imam Khomeini soon declared that no one has the right to use arms in protests and no one has the right to fire at the embassy. The second time when the students raided the embassy, it was with bare hands.”

He went on to say “Also, on 22 Bahman, I was on the street with the people. Imam Khomeini had told the people to put a flower in every muzzle of a rifle held by soldiers on the streets. He was not a supporter of violent protests, he did not believe in armed revolution. He also said the army members are your brothers. However, some political parties were opposed to this and thought that the use of arms was the most effective means of reaching the goal.”

The Vahdat tent is a major point in Davood Abadi’s memories which includes more of a personal experience within the folds of the revolution. He even published a book about this tent recently.

Davood Abadi recollects saying “We were a group of young people who decided to set up a tent in front of the university main campus and we called it Vahdat (Farsi for unity). During that period of time, Tehran University had become the central point where all political groups and factions were present. We were 35 people only. We sold books and tapes in the tent, and started participating in all events taking place, whether protests or debates or else. What prompted us to start our small movement is because we saw that some political groups were deviating from the goals and values of the Islamic Revolution so we had to peacefully stand up for that. It was basically the Khalq, (mujahidin Khalq – MEK) that I am talking about, they were violent and believed in an armed revolution. We wanted to emphasize that the revolution was peaceful and must remain peaceful, and that we do believe in the values that Imam Khomeini had taught to the people.”

On 16 March 2003 in Rafah, occupied Gaza, 23-year-old American peace activist Rachel Corrie from Olympia, Washington, was murdered by an Israeli bulldozer driver. Rachel was in Gaza opposing the bulldozing of a Palestinian home as a volunteer with the International Solidarity Movement.

The academic said “Rachel was one person only, and she stood with bare hands in face of an Israeli bulldozer. Rachel was killed, but she tried to tell the world loudly as she was killed that Israelis are not supposed to be destroying the homes of innocent Palestinians. She is never mentioned by mainstream media, they tried so much to keep her in the dim light, but she did her duty. The same goes with us in the Iranian revolution; we had to stand up and loudly voice our objection to corruption and injustice and we had to also confront certain political parties that were trying to hijack the revolution.”

Imam Khomeini, as Davood Abadi mentions, always emphasized that “the revolution cannot see light and victory with death and killing, and that means do not justify ends. This, in the view point of the author is at the essence of the revolution of Iran, and this is what made it truly successful. It was a humane and good-willed revolution that was popular, with men, women and children seeking change. It was essential that the people standup for themselves and for the oppressed and carry out their duty wholly.”