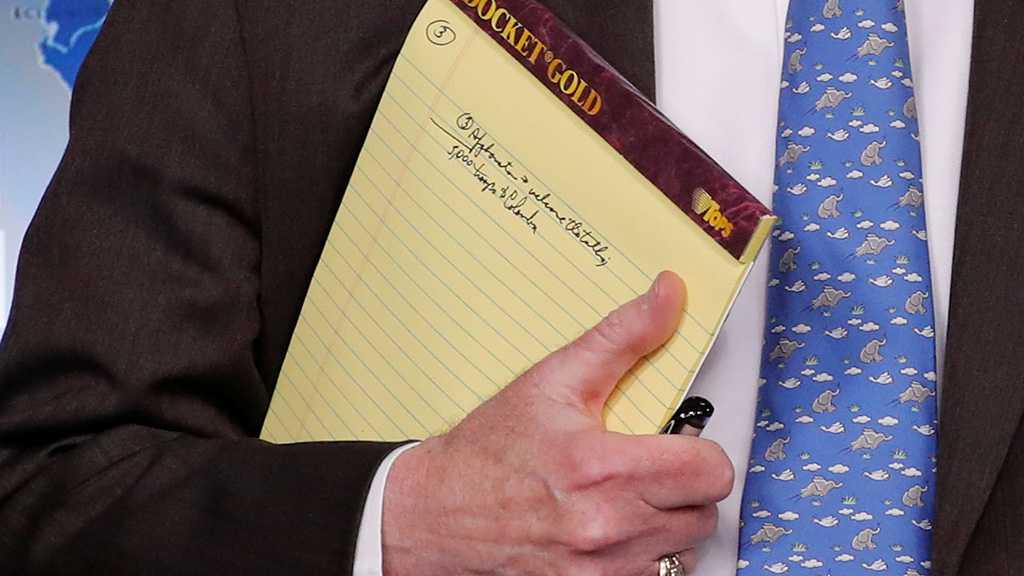 Colombia dismissed speculation regarding a puzzling memo from John Bolton, which mentioned 5,000 US troops being sent to the Latin American nation, affirming that it will rely on politics and diplomacy in the Venezuela crisis.

Carlos Holmes, Colombia’s Foreign Minister, said he is unaware of the “importance and reason” behind John Bolton’s memo, noting that his country will only act “politically and diplomatically” in dealing with Venezuela.

Colombia shares a 2,200km land border with Venezuela and has sided with the US in piling pressure on Venezuelan President Nicolas Maduro’s government. Recently, Colombia backed Juan Guaido, the opposition leader who proclaimed himself to be the interim president of Venezuela.

The tight-lipped remark came in response to news from the White House on Monday, when US National Security Advisor John Bolton was spotted holding up a yellow legal notebook during a press briefing on Venezuela.

The first line written on the pad appeared to say: “Afghanistan – welcome the talks,” while the second one read: “5,000 troops to Colombia.” The White House was conspicuously reluctant to clarify the meaning of the note, and distributed the same brief comment to multiple news agencies: “As the president has said, all options are on the table”.

During the same briefing, Bolton and Treasury Secretary Steven Mnuchin announced that a package of sanctions would be imposed on Venezuela’s state oil company, Petroleos de Venezuela SA. According to Bolton, the sweeping restrictions will freeze $7 billion in assets and cause more than $11 billion in lost export revenues during the next year.

The US buys a sizeable amount of Venezuelan oil, but Mnuchin said that the sanctions would have a “modest effect” on American imports. Venezuelan President Nicolas Maduro reacted angrily to the sanctions, labeling them “criminal.” Speaking in English, Maduro told US President Donald Trump: “Hands off Venezuela!”

He also vowed a “symmetrical response” to US measures in the immediate future, to “protect the interests of Venezuela.”

Adding to the US-led pressure on Maduro to step aside, Spain, France, Germany and the UK on Saturday issued the elected leader an ultimatum, urging him to call for new elections within eight days.

“First of all, it is interventionism to the highest degree. Secondly, it is arrogant, and, thirdly, it is artificial,” Venezuelan Foreign Minister Jorge Arreaza commented in an interview to RT Spanish. “The Bolivarian democracy only requires recognition and support from Venezuelan people,” he stated, adding: “Other governments are of little interest to us.”