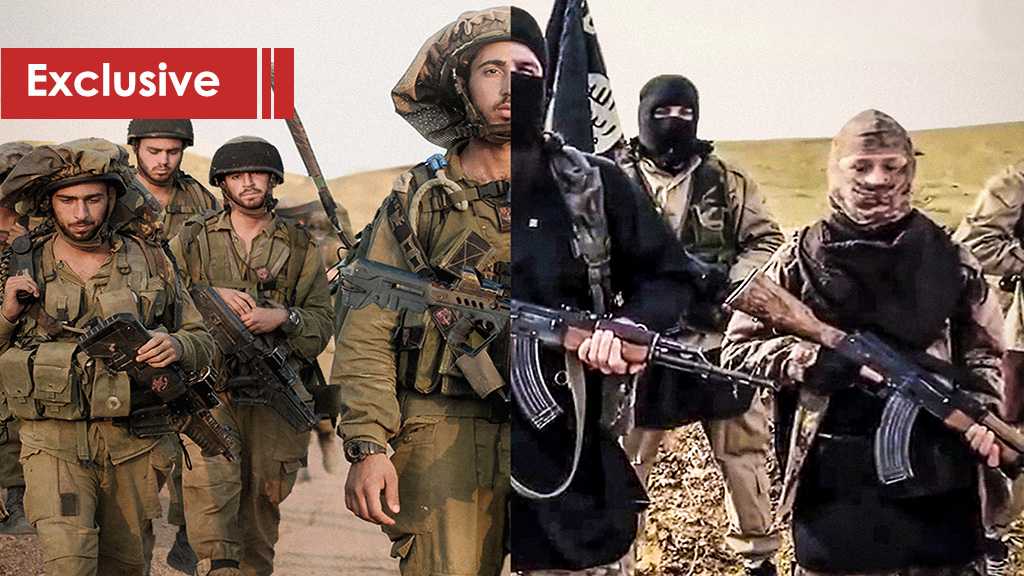 When the word “terrorist” is mentioned, it would be normal to imagine a person with rugged features who places a bomb in an innocent family’s house. This same individual would be so cold-hearted that he might have shot a child the day before. He would be a dogmatic follower of fanatic beliefs which allow him to end people’s lives without losing any sleep. A terrorist is filled with hate and presumes himself to be higher on the righteousness scale. He believes that he has been a victim, that he has been hard done by. These feelings are what turn him from a naturally born compassionate human to a murderous sociopath.

The above can easily describe any member of “ISIS”. It is also a description of an “Israeli” soldier. They are both the same.

Terrorism is when heavily armed men abuse, verbally and physically, a young man walking back home with less than minimum pay in his wallet because their apartheid regime will not allow him to work unless he accepts peanuts for hard labor. Terrorism is when these armed men shoot a beautiful teenager through the books in the backpack she’s carrying; the amount of bullets piercing her innocent body make it seem like they were target practicing. It is when they drag an eight-year-old boy by the hair across the street and kick him with army boots into their vehicle; his mother suffers a broken jaw from the strike of a shoulder stock of a rifle while trying to hold on to him.

These are the terrorists that make up what is called “The Most Moral Army.”
Since the word “Moral” is definitely misplaced in this description, namely due to the atrocities that the free press of the world reports on a daily basis out of occupied Palestine, then every word in this sentence can be subject to error. The usage of the word “Army” is also misplaced if a person considers that an army has to belong to a country and the latter cannot be a fabricated entity void of indigenous culture.

Far from their destructive unlawful presence in the area which is based on murder and horror, it almost makes a person feel sympathy towards the “Israelis” for their lack of anything cultural that binds them to this land. They are so culturally bankrupt that they practically steal dishes and claim them for their own. The illegal settlers whose national dishes are Bigos, Banush, and Sauerbraten have suddenly claimed the Jordanian Hummus and the Lebanese Tabbouleh to be theirs. It is so sad.

Going at this pace, we will soon be seeing rabbis wearing Sherwals and dancing the famous Dabkeh, claiming that to be part of their folklore as well.

Shipping in a mix of foreigners to massacre locals and steal their land under biblical pretenses neither makes their claims nor their presence legal. If the Holy Bible sanctions murder and theft then the Pope of Rome will have a lot of explaining to do. But, we all know it doesn’t because the Christians of the Middle East have been amongst the fiercest defenders of the Holy Land against the Zionist infestation.

Latifa Abu Humaid’s house was surrounded and had explosives planted in it. The old woman’s home was demolished. This came after she had lost her six sons to assassination and incarceration. If this is not terrorism, what is?

It does not come as a surprise, though, that the “Israelis” operate this way. That they rely on subhuman unethical rules of engagement with anyone opposing their tyranny. After all, they walk in the footsteps of the creators of their unlawful geographical entity. Individuals like Golda Meir who, as “Prime Minister”, was a part of creating a list of 20-35 people tagged for assassination. She gave the green light to begin the killings and she supervised the process. Is the act of orchestrating assassinations not terrorism?

“Israel’s” terrorism is also practiced by proxy. It has foreign agents placed in top positions of other governments working for its benefit. Nicky Haley gave, yet, another cheap performance at the United Nations the other day. It was because the motion to name the Palestinian resistance a terror group did not see the light. The voting result of the international community caused her feelings to be hurt. Nicky doesn’t have any feelings when Palestinian children lose their lives at the hands of murderous settlers; her Zionist emotions are triggered only when “Israel” doesn’t get its way. She did that “I’ll huff and I’ll puff” routine against those who failed to vote in her masters’ favor. Threats are another shade of terrorism.

There is no doubt that many Jews were persecuted in the first half of the past century, but that is definitely not an excuse for anyone to be granted an international license to terrorize humanity and, definitely, not an excuse to turn Palestine into holocaust grounds for its people. This is said with the strong belief that those occupying Palestine and committing all the terror do not represent Judaism; rather, Zionism disguised as Judaism. In all cases, the people of Palestine did not have anything to do with the Zionist creation of the Nazi party and the subsequent conspiracy against Jews.

We’ve all watched the movie “Schindler’s List”. There weren’t any Nazi officers from Gaza or Ramallah or Nablus. Not a single one was called Omar or Khalid or Mohyi Eldeen. So, if it is a matter of reprisal, they have, without doubt, unleashed their malice and spite onto the wrong people.