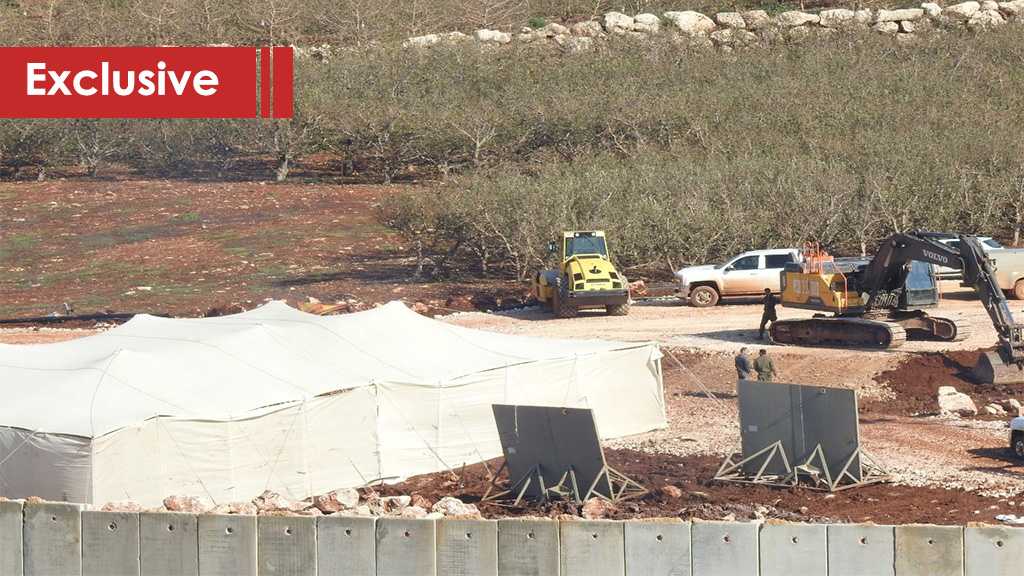 On the morning of December 4, people woke up to news reports about the implementation of new measures by the Zionist enemy along the Lebanese border.

These measures were labeled using different descriptions and accompanied with the word “operation”- in the hope that they would have a greater impact on the readers and viewers.

In addition, a broad objective was announced, which included the exposure of "tunnels" that the “Israelis” claimed Hezbollah had dug into the occupied territories.

What was the scene at the border that morning?

At first glance, many believed that the enemy would escalate the situation as the noise from behind the wall of four “Israeli” diggers got louder. The excavators were positioned between two points: the first near Fatima Gate and the second near the water line on the Kafr Kila-Odaise road.

The entire Hebrew-language media, western outlets as well as the “Israeli” army’s Arabic and Hebrew speaking spokespersons positioned themselves at a point overlooking the excavations. The airwaves were opened for most channels to broadcast the event. Leading the “Israeli” army’s charge were soldiers carrying either handheld or cameras mounted on their heads. Two soldiers belonging to the war media department were deployed at each of the two points.

It only took the “Israeli” army two hours to announce that it discovered a tunnel and broadcast a photo. “Israeli” media reports were peppered with plenty of exaggerations and highlights of the supposed achievements.

An hour after the enemy broadcast a simulated image of the tunnel on Lebanese territory followed by a video, it was clear that “Israel” had prepared in advance because it was impossible to photograph so deep underground with such speed using a small camera.

Here lies a paradox. While it was able to achieve such rapid and gradual progress – media wise – with respect to the tunnels in Kafr Kila, it failed to do so in Ramyeh. The “Israelis” had dug 36 wells opposite to the village of Ramyeh. 18 days later, the enemy announced it blew up a tunnel. It, however, failed to present proof of its existence. There was also no media coverage. Similarly, “Israel” has been digging in the areas opposite to Aita al-Shaab and Blida. The work is still ongoing, but with no apparent results.

This raises a question. Is this not the same army that discovered a tunnel within two hours? How come it is unable to back its other alleged discoveries with evidence?

The enemy’s new measures have been accompanied by a campaign of intimidation against Hezbollah, the Lebanese state and civilians through the hacking of local communication networks and the sending of threats through voice messages.

How did the Lebanese face this challenge? The Lebanese media’s role should be commended in sending a counter message to the “Israelis”.

The Lebanese state dealt calmly and wisely with this issue and rejected the dictates of the enemy. The Lebanese army, which was in contact with the “Israeli” soldiers, proved its ability to take the initiative and not to give up a single inch of land based on the trilateral equation. This was evident in the events that unfolded in Mays al-Jabal. The enemy was forced to move back its barbed wire along five points. At the last point the barbed wire was moved back by about five centimeters. The Lebanese army emerged victorious in the war of wills.

As far as the masses were concerned, there was an increase in the number of Lebanese cars driving along the border just a few meters from the “Israeli” diggers. The enemy threatened the Lebanese people and warned them to stay away from the vicinity of the excavation areas, but they did not seem to care what was happening behind the wall.

Elsewhere in Kroum al-Sharaqi, “Israeli” soldiers became the subject of jokes thanks to the media’s psychological warfare policy. Pictures and activities mocked “Israeli” soldiers. They exposed the weakness of the heavily armed “Israeli” troops. In one picture, a soldier is seen dozing off while on guard duty. In another, the soldier breaks the service rules by showing his face and smoking a cigarette in secret behind a rock. Another soldier is shown brandishing a rifle at a child carrying a toy bulldozer.

All of the above forced “Israeli” media to keep up with events at Mays al-Jabal at the expense of covering the news about the actual tunnels. Zionist analysts wondered: "how is it possible that the commando forces deployed along the border became the subject of ridicule and mockery!"

For its part, Hezbollah remained silent on the grounds that everything taking place across the border does not require any comment.

On the other hand, the “Israeli” operation cast a shadow of anxiety and tension over Zionist settlers who feared a response. This prompted “Israeli” Premiere Benjamin Netanyahu to visit the Misgav Am settlement, opposite to the border village of Odeise, and meet with the heads of the so-called local councils in Kiryat Shmona to calm them down. So did the chief of staff and some of the other top leaders.

The “Israeli” media’s task was redirected from broadcasting news about the tunnels to ensuring a state of calm among the settlers.

In addition, the enemy transformed the Metula hole into a ‘monument’ and invited all foreign diplomatic missions there. The objective here is to pressure Lebanon in international forums.

It is worth mentioning that all the incidents along the border involved the occupation forces and the Lebanese army, especially in Mays al-Jabal. However, the enemy's media distorted the truth and included Hezbollah in every incident.

As the objectives of the “Israeli” project – which were based on intimidation and threats – fail, it is clear that the media’s efforts in this affair remained confined behind the wall. And the settlers alone hear them amid the silence of the “Israeli” bulldozers along the border.

Today, the “Israelis” are back to the same old “wall” symphony. The enemy resumed work on installing an iron fence after briefly halting construction to focus on the excavations earlier this month.

In the end, the enemy did not record any military, media or psychological achievements from its measures. On the contrary, it lost more of its people’s trust. It did not impose any new equation on the opposing side.

The developments exposed that “Israel’s” actions were fuelled by their Lebanese obsession, which is ever-present. This calls for more self-confinement by completing the construction of the wall at new points. This is what the commander of the “Israeli” army’s Galilee Division, Rafi Milo, recently promised during his meeting with the settlers along the Lebanese border.