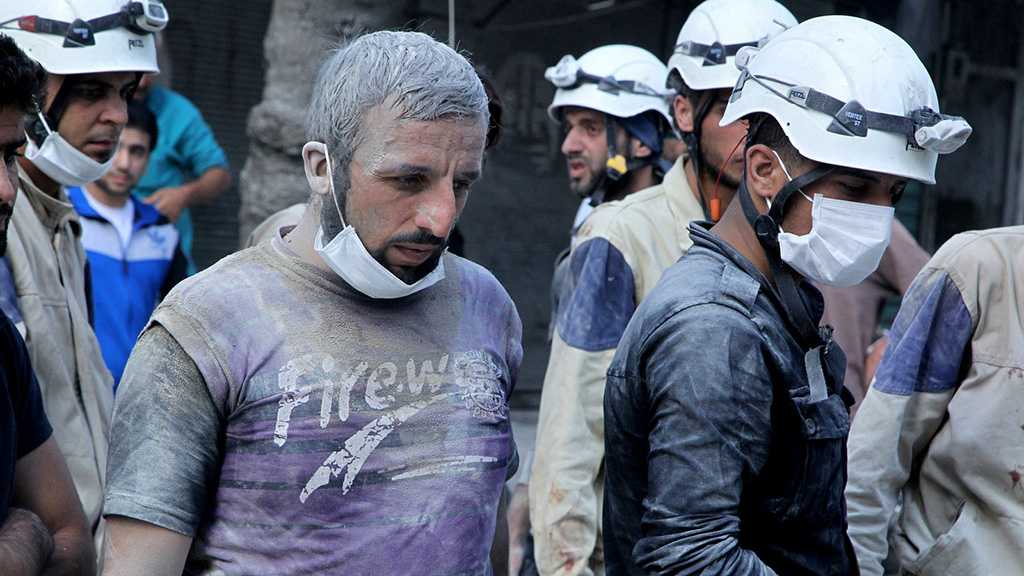 The Western-backed so-called White Helmets group engaged in organ trafficking, terrorist logistics support and looting in Syria, according to a report presented to the UN.

The evidence was presented by the director of the Russia-based Study of Democracy Foundation Maxim Grigoriev on Thursday.

The report is based on interviews with over 100 eyewitnesses, including 40 White Helmets members, 50 local residents and 15 former terrorist fighters.

Over 500 civilians were also surveyed in the Syrian cities of Aleppo and Deraa.

"There is overwhelming evidence which proves that the White Helmets centers were permanently engaged in building fortifications for battle positions for terrorist and illegal armed groups who had been supplying them with water and food and evacuating wounded terrorists from the front line," said Grigoriev.

The researcher went on to quote a White Helmets member from the formerly terrorist-held Syrian town of Douma saying, "for instance, we dug trenches in the towns of Mesraba and al-Shaifuniya and constructed an earthen mound."

"People evacuated by the White Helmets often did not come back alive," Grigoriev said quoting a witness from an area where the group operated.

"For example, a person receives a minor injury, is rescued, evacuated and then brought back with their stomach cut open and with their internal organs missing."

Citing reports from the organization's members in the Syrian town of Saqba, the study also revealed extensive corruption within the group's network, with leaders making private gains out of donations and members looting the civilian population.

"Sometimes we came to help, entered a flat, and, if we found gold or jewelry, seized it," Grigoriev quoted a White Helmets member in Douma. "In one flat, there was a woman who felt ill, we came to help her, found some gold and stole it."

Reiterating previous reports about the group's attempts at staging civilian casualties and chemical attacks, Grigoriev pointed to a particular case in Jisr al Haj, Aleppo where trash was set on fire and bodies were brought from a local morgue to stage a filmed rescue.

A written testimony from a White Helmet member claimed that everyone involved had received an extra $50 for the effort.

Grigoriev went on to explain that “undeniable evidence” indicated the group had been taking written orders from terrorist groups and that almost all group members were paid staff, not volunteers.

The evidence, the researcher said, proved that the White Helmets is not an "aid group" but an extension of terrorist groups in Syria.

“Facebook accounts of members of the White Helmets are full of propagandist materials of terrorist groups, including [Daesh] and al-Qaeda, praising Osama bin Laden and other individuals listed by the UN as terrorists,” added Grigoriev.

The director highlighted that “hundreds of photos with weapons in their hands” were available on social media.

Russia’s UN envoy Vassily Nebenzia, who was also present at the UN hearing, said the evidence showed that “the White Helmets deserve to be on the United Nations’ designated terrorist list.”

The self-styled volunteer group has been repeatedly accused of acting as the media arm for Takfiri terrorist groups, and charged with staging false flag chemical attacks in a bid to prompt Western military intervention in Syria.

In July, several hundred people affiliated with the group were evacuated from southern Syria to “Israel” amid a successful Syrian Army operation in the region.

The UK, Canada, and Germany have proudly announced interest in accepting the White Helmets as refugees.