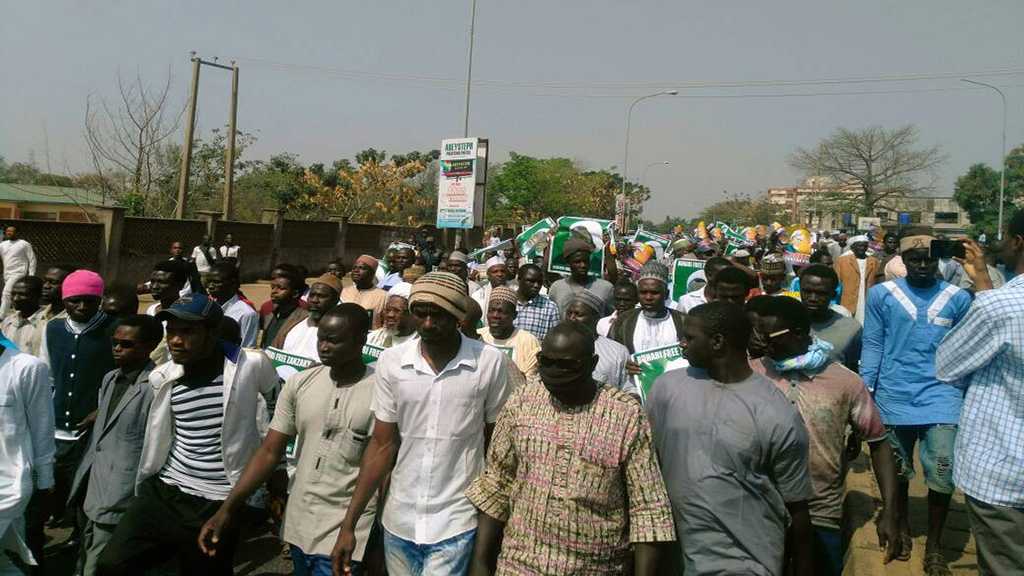 Nigerians waged again a protest rally in the capital of Abuja to demand the release of top Muslim cleric, leader of Islamic Movement in Nigeria [IMN], Sheikh Ibrahim Zakzaky.

Calling for justice for the 65-year-old cleric, who was beaten and arrested in 2015 along with his wife on trumped-up allegations, the protesters chanted slogans in support of Sheikh Zakzaky on Saturday and insisting on his immediate release from prison.

Sheikh Zakzaky has been held since December 2015 following a deadly raid by the Nigerian army troops on his residence in the country’s northern Kaduna State. He and his wife as well as a large number of his followers have been kept in custody ever since.

During the raid, Sheikh Zakzaky’s wife sustained serious wounds too and more than 300 of his followers and three of his sons were killed.

Sheikh Zakzaky was officially charged with “unlawful assembly, disruption of public peace”, allegations vehemently denied by his group, known as the Islamic Movement of Nigeria [IMN].

The latest protest rally for Zakzaky’s freedom came after a court in the city of Kaduna ruled earlier this month against his immediate release on bail due to his deteriorating health that requires urgent medical care.

"We are disappointed with the court's decision," added IMN spokesman Ibrahim Musa, emphasizing that Zakzaky should have been granted bail due to poor health. "We will keep on with our protests in Abuja and other cities."

A judicial inquiry after the 2015 brutal raid concluded that the military had killed 347 IMN members in Zaria. Soldiers buried the bodies in mass graves.