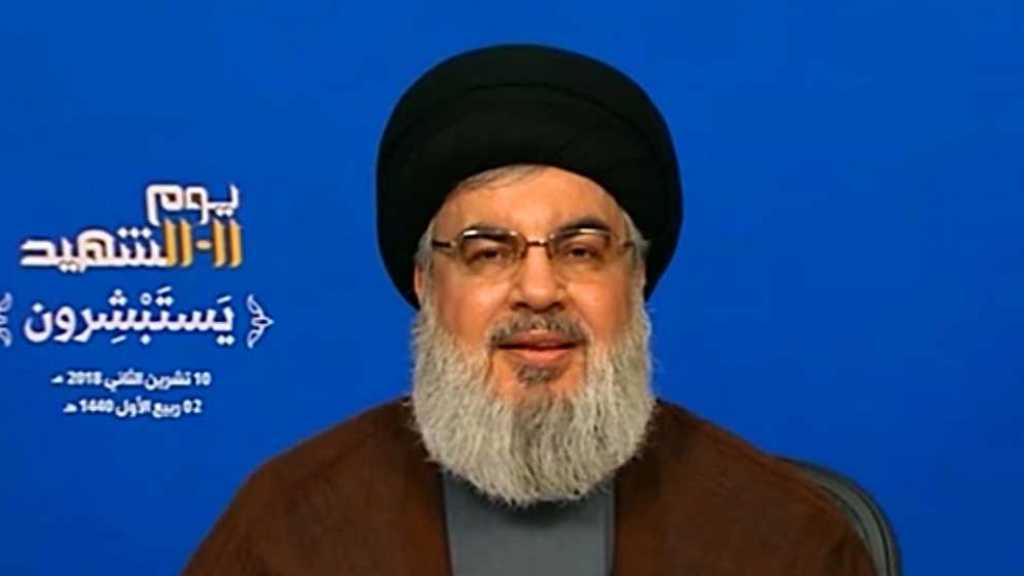 Hezbollah Secretary General His Eminence Sayyed Hassan Nasrallah delivered on Saturday a speech in which he tackled various regional and Lebanese topics.

Addressing  thousands of people commemorating Hezbollah Martyrs’ Day, Sayyed Nasrallah hailed the  resistance that was decisive, firm and strong. “The Resistance managed to achieve victories,” he added, pointing out that “there are families who sacrificed more than one or two martyrs.”

“Today we are honoring all martyrs, self-scarifying martyrs and the Mujahedeen who were martyred in various fields and still convoys of martyrs contribute to achieving victories,” the Resistance Leader emphasized.

According to Sayyed Nasrallah: “All of our country's security and honor are because thanks of the martyrs’ blood.”

His Eminence further highlighted that “Deterrence exists because of Hezbollah’s missile capabilities as the Lebanese Army isn’t allowed to possess such types of missiles.”

“We adhere to the golden equation of the Army, People and the Resistance,” he affirmed, noting that “Hezbollah will also adhere to the strength of the resistance and to all its missiles.”

Meanwhile, Sayyed Nasrallah asserted that ““Israeli” PM Benjamin Netanyahu can’t bear the strength of the resistance and the quantity of rockets in Lebanon.”

“The “Israeli” is focusing on the resistance missiles through diplomatic pressure, intimidation and the use of the Americans,” he explained.

In a warning message to the “Israeli” entity, Sayyed Nasrallah announced that “Hezbollah will absolutely retaliate against any “Israeli” aggression, air raid or shelling  on Lebanon.”

“It isn’t acceptable for the “Israeli” enemy to return to Lebanon,” he reiterated, stressing that “even if we sold our houses, we will preserve these [the Resistance’s] missiles.”

In addition, His Eminence stated that “Hezbollah is not afraid of any sanctions and we will continue to preserve our weapons and missiles.”

“Current normalization puts an end to some Arab’s hypocrisy and will make masks fall,” he mentioned.

Sayyed Nasrallah went to say that “the US sanctions against Iran will have no effect on Hezbollah.”

Hailing the sacrifices of Palestinian people, His Eminence viewed that “The people of Gaza are the hope through their March of Return  and the sacrifices they make.”

On Syria, Bahrain and Triumphant Yemen

On Syria, he said: “If Syria’s people and leadership  did not resist, we would have seen Netanyahu as well as the “Israeli” culture minister at the Umayyad Mosque.”

“We solemnly praise before the people of the occupied Syrian Golan, who thwarted the occupation’s elections,” Hezbollah Secretary General said.

Moreover, Sayyed Nasrallah commented on the recent developments related to Saudi journalist Jamal Khashoggi’s murder by saying: “The world has every right to get surprised and condemn what happened, but this world is also strange for standing unmoved while witnessing the daily massacres in Yemen.”

“We are in front of a new situation in Yemen and the call for an end to aggression may be either serious or potentially deceitful,” he added, noting that “The possibility for calling to an end to the aggression on Yemen is due to fact that the Yemenis have resisted this aggression.”

Regarding the situation in Bahrain, His Eminence underscored that “the authorities in Bahrain want the people to surrender but they will not give up.”

“The Bahraini judiciary’s move in turning Sheikh Ali Salman's acquittal into a life sentence is repressive,” he added.

“The announcement of the US initiative to cease fire after a month coincided with the most severe aggression on the west coast of Yemen,” Sayyed Nasrallah emphasized, noting that “the Yemeni people are closer to victory than ever before.”

Political Modesty Our Prob in Lebanon

Moving to the internal Lebanese front, Hezbollah Secretary General commented on the Lebanese government formation process by declaring: “All officials including President Michel Aoun and House Speaker Nabih Berri had initially agreed on the representation of independent Sunni MPs but the PM-designate did not.”

“Lebanon does not need more than eight or ten ministers to represent all its parties but they chose to make it 30,” he added, wondering: “Why not to form the government of 32 and allow place for the representation of Sunni MPs?”

His Eminence also said: “We’ve never thought about allocating a share for independent Sunni MPs from the share of President Michel Aoun.”

Sayyed Nasrallah further clarified that “Since day one after the Premier’s designation we have demanded that Sunni MPs of March 8 be represented,” announcing that “Political modesty in Lebanon does not work.”

Asking PM Saad Hariri to give the Sunni MPs in March 8 a seat from his share, he affirmed that “Hezbollah will agree to any decision by the Sunni MPs regarding their participation in the government.”

On Hezbollah’s relations with President Aoun and the Free Patriotic Movement, Sayyed Nasrallah said: “Our relation with Aoun and the FPM are intact and no one can drag us to a rift over the Sunni obstacle.”

Meanwhile, he slammed the statements of the Progressive Socialist Party leader Walid Jumblatt who accused Hezbollah of “delaying the cabinet formation”.

“Jumblatt has obstructed the government formation for a whole of four months and has no right to speak of obstruction.”

In conclusion, Sayyed Nasrallah affirmed: “When the six MPs call us and tell us, ‘You may give the names of your ministers [to Hariri],’ then we will.”