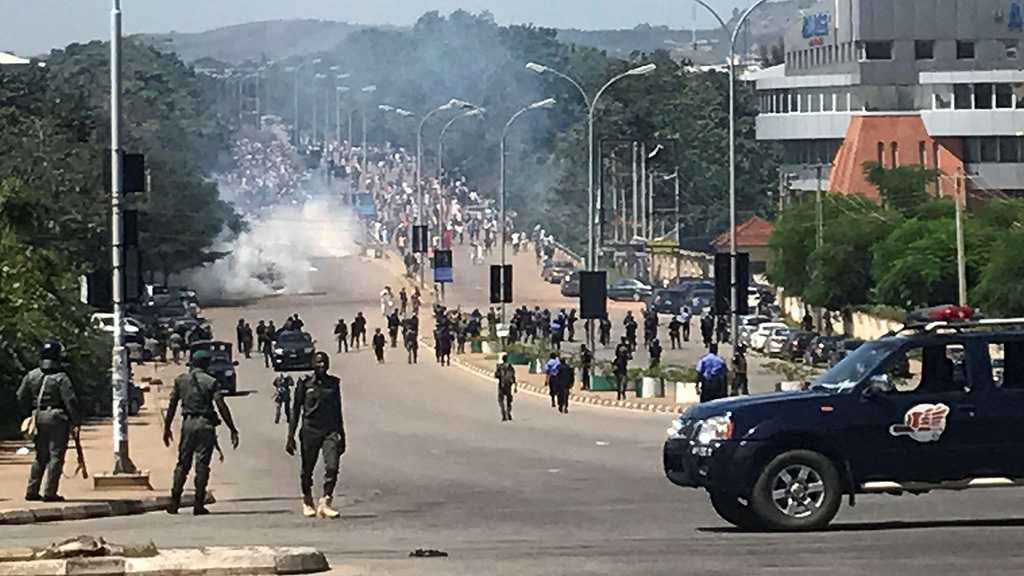 The movement of a detained Nigerian Shia cleric whose followers have repeatedly been targeted by the authorities said on Wednesday security forces had martyred 42 of its members during two days of violent crackdowns on protests in the capital Abuja.

Security forces opened fire with live ammunition on members of the Islamic Movement of Nigeria (IMN) who had held a peaceful religious procession around Abuja.

During protests on Saturday and Monday IMN members demanded the release of Sheik Ibrahim El Zakzaky, whose detention was described by a federal court in December 2016 as unlawful and unconstitutional.

Sheikh Zakzaky has been in detention since 2015 when the army martyred hundreds of his followers at his compound and a nearby mosque and burial ground.

The IMN raised its death toll on Wednesday from the two previous days' violence to 42 from an earlier figure of 25. The toll included seven people who died of injuries received on Tuesday and 35 killed the previous day, said Ibrahim Musa, an IMN spokesman.

On Monday, the army opened fire on the marchers on the outskirts of Abuja. On Tuesday, the police shot at the protesters in the city center, issuing a statement later that day saying 400 IMN members were detained. The statement did not mention any deaths.

Amnesty International has conducted an investigation in to the matter. The investigation shows that the horrific use of excessive force by soldiers and police led to the martyred of at least 45 supporters of IMN over two days.

Amnesty researchers visited five different locations in Abuja and Nasarawa state where wounded IMN supporters were receiving treatment, including two locations where bodies were deposited. Researchers spoke with victims, eyewitnesses and medical practitioners, and analyzed videos and photographs of those injured and killed during the protests, which took place on Saturday and Monday.

“We have seen a shocking and unconscionable use of deadly force by soldiers and police against IMN members. Video footage and eyewitness testimonies consistently show that the Nigerian military dispersed peaceful gatherings by firing live ammunition without warning, in clear violation of Nigerian and international law,” said Osai Ojigho, Director of Amnesty International Nigeria.

“Those injured were shot in different parts of the body – head, neck, back, chest, shoulder, legs, arms – and some of them had multiple gunshot wounds. This pattern clearly shows soldiers and police approached IMN processions not to restore public order, but to kill.”

Amnesty International has evidence that the military used automatic firearms during Monday’s protest, in which at least 122 protesters sustained gunshot wounds and at least 39 were martyred. At least six people were martyred in protests on Saturday.

The organization’s research team counted 24 bodies (23 male and one female) and trusted sources provided details of 21 others. Two of the bodies seen had their legs severed, which

Amnesty International’s military and weapons expert analyzed as consistent with injuries caused by a heavy fully-automatic machine gun such as a PKM or DShK.

“It seems the Nigerian military are deliberately using tactics designed to kill when dealing with IMN gatherings. Many of these shootings clearly amount to extrajudicial executions,” said Osai Ojigho.

“This violent crackdown on IMN protesters is unjustified and unacceptable. They were perfectly within their rights to hold a religious procession and protest and there was no evidence they posed an imminent threat to life.”

Many injured IMN supporters have sought medical treatment in unofficial buildings due to fear of arrest if they go to hospital.

One medical worker near Abuja told Amnesty International: “From yesterday (Monday) I attended to 57 people with gunshot wounds, most of them still having the bullets lodged in their bodies. We are only trying to stabilize them by arresting the flow of blood before sending them to hospital. It is not an ideal situation because this is an uncompleted building, not a hospital. I am hoping that they get to hospital today.”

Since a massacre of over 350 IMN supporters which took place in Zaria in 2015, the Nigerian authorities have consistently sent in the military to respond to IMN protests or marches. This strategy appears to be at least partly to blame for the bloodshed witnessed on Saturday and Monday.

International law is clear that security forces policing demonstrations must not use firearms against protesters unless they pose an imminent threat of death or serious injury, and only if there is no lesser way to avert such threat. They must never use firearms to disperse a demonstration, even if it turns violent. Firearms must never be used as a tactical tool for the management of demonstrations: they may only be used for the purpose of saving another life.

The Nigerian authorities have an obligation under international law to ensure there is a full and independent investigation of deaths at the hands of security forces and that those responsible, including in the command structure of the security forces, are held accountable under criminal law.