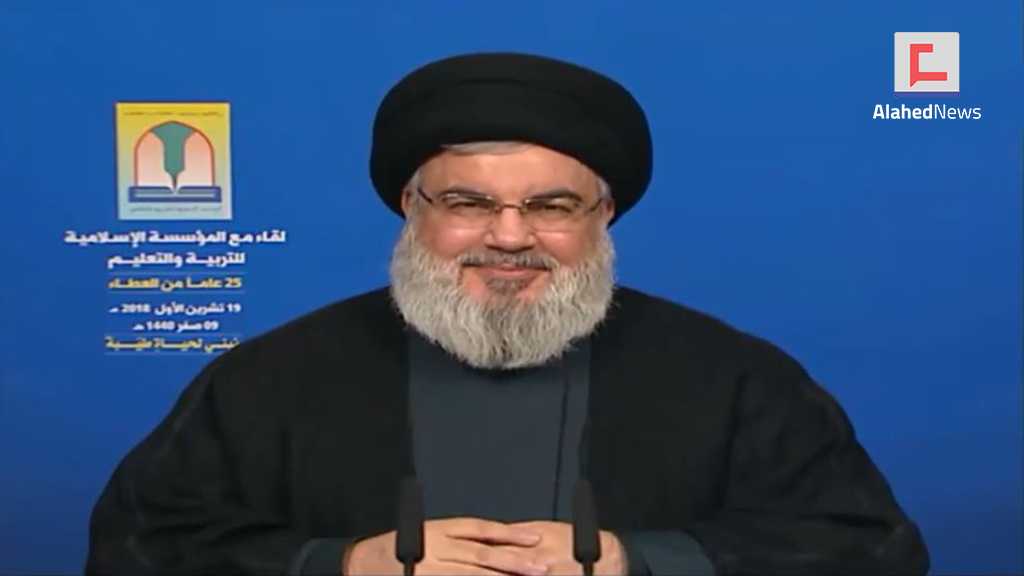 Hezbollah Secretary General His Eminence Sayyed Hassan Nasrallah stressed that we belong to a movement that is moving forward in all its institutions, programs and formations despite the bets of enemies and sanctions.

He further warned that “the US and “Israel” continue to use science and technology for hegemony, looting and humiliation of people and governments.”

Addressing thousands of teachers celebrating 25 years on the establishment of Al-Mahdi Schools, His Eminence confirmed that “We in Hezbollah are better than ever on all levels.”

“We, in all the political, security, moral, financial, popular, social, financial, local and regional levels are in our best conditions,” he assured.

Regarding the regional developments, Sayyed Nasrallah underscored that “the region is waiting for Gaza events in light of mutual alertness, “Israeli”  escalation and threats.”

In parallel, His Eminence emphasized that “What is happening within the next few hours or days is very important for the Gaza Strip and for the region.”

Commenting on the disappearance of Saudi journalist Jamal Khashoggi, the Resistance Leader  highlighted that “since the beginning of Khashoggi crisis and despite our great pain from the Saudi regime, especially with regard to the war in Yemen, we were keen to be in the position of observer and we could exploit it.”

“There is no doubt that the rulers of Saudi Arabia and America are in a difficult situation due Khashoggi's disappearance,” he said.

In a clear message to the Saudi rulers, Sayyed Nasrallah said: “You must allow the Yemenis to move towards a political solution. The rulers of Saudi Arabia must know that the international cover of their war on Yemen is collapsing.”

“The Saudi kingdom's image in the world has never been worse throughout 100 years,” he added, noting that “continuing this obstinacy with regard to the war in Yemen will lead to destruction.”

As for the formation of the new Iraqi government, Sayyed Nasrallah hailed the political development. “What happened in #Iraq is a political defeat for the Americans,” His Eminence mentioned.

However, he viewed that “it is a mistake to link between the political developments in Lebanon and Iraq.”

Meanwhile, Sayyed Nasrallah confirmed that “Iran has not been involved in the government formation, neither before nor after the sanctions were applied, and talks about the Iranian government obstructing the formation are nothing but false accusations.”

Regarding the political deadlock in the formation of Lebanese government, Sayyed Nasrallah rejected all claims that claims that he sat with [Lebanese FM Gibran] Bassil and informed him of the need to form the government through offering concessions before the US sanctions on Iran enter into force.

“This meeting did not take place and these statements  were not said,” he clarified, pointing out that “Hezbollah doesn’t not impose its will on the Free Patriotic Movement, the PM-designate or any of the political forces.”

Moreover, His Eminence went on to say “I can’t really say that what has prevented the government formation is interference from abroad – whether from our allies, Iran and Syria, or rivals. It is clear that there are domestic complications.”

Reiterating that Hezbollah doesn’t interfere in the distribution of portfolios and shares, Sayyed Nasrallah affirmed that “the government file is in the hands of President Michel Aoun and PM Saad Hariri.”

In addition, he assured that “it is clear that there is optimism and huge and important progress that took place regarding the government formation.”

However, His Eminence cautioned that there are still things that need to be resolved, including the distribution of [ministerial] portfolios.

He also advised different sides not to put a deadline for the government’s formation, as new issues that weren’t disregarded might emerge.