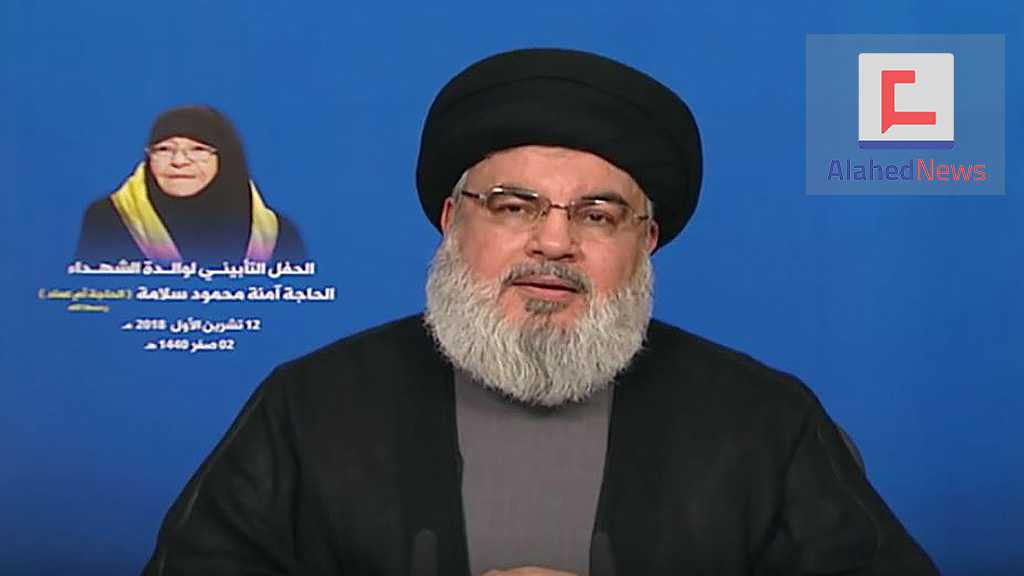 Hezbollah Secretary General His Eminence Sayyed Hassan Nasrallah stressed that today we are facing a president and an American administration whose standards are based on money.

“They are so arrogant that they insult their allies and friends,” he stressed, pointing out that “[US President Donald] Trump is arrogantly and greedily robbing Saudi Arabia.”

In a speech during the memorial ceremony held by Hezbollah for mother of martyrs, Hajja Amna Mahmoud Salama [Um Imad Mughniyah], His Eminence shed light on Trump’s latest speech demanding money from rich countries in exchange for protection.

He further recalled that Trump told Saudi Arabia, ‘Without the US, your planes will not stay in the sky and that if it had not been for America, you won’t stay ruling for 2 weeks.”

In this context, Sayyed Nasrallah explained how the US President continues arrogantly and greedily to steal rich countries, particularly Saudi Arabia.

“Trump shows no respect for ethics, human rights and justice in his remarks. We are in front of a US administration, which does not shy away from using the language of contempt and humiliating anyone, even if it was a friend and ally,” he said.

His Eminence underscored that the US president humiliates the international organizations and continues to insult America’s friends and allies, who are responding to this with smiles and silence.

Meanwhile, Sayyed Nasrallah recalled that late Imam Khomeini had previously said that the US administration consists of thieves. “Imam Khomeini described the US government not only as arrogant and Satan but also as a thief, it is a regime of theft.”

His Eminence stated: “It is a regime of theft. Former US presidents were also thieves but did not perpetrate their misdeeds blatantly. They were diplomatic thieves unlike this current president who steals the Arab fortunes while humiliating them.”

Commenting on Trump’s statement that the Islamic Republic of Iran is capable of controlling the Middle East region in 12 minutes, His Eminence cautioned that “Trump is making use of the anti-Iran rhetoric in a bid to sell billions of dollars’ worth of American munitions and military hardware to Arab rulers.”

To the Gulf rulers, the Resistance Leader raised the following questions: “On whom are these rulers betting? [Are you betting] on Trump and the American administration that takes your money and humiliates you every day?”

Urging the Gulf leaders to re-examine their choices between Trump's insults and living in pride, Sayyed Nasrallah called them to reconcile, cooperate and listen to the demands of their peoples and to address the problems in their countries. “It would be better if the Arab leaders allocate the billions of dollars that they are paying Trump to solve their internal problems.”

In parallel, he denounced the fact that “some countries are paying 'Jizyah' to Trump in order to protect their thrones and rule.”

Moving to the “Israeli” front, Sayyed Nasrallah described the recent “Israeli” claims about the presence of missile plants near Beirut airport as a “farce”.

“I reassure that our policy on this issue is silence no matter what “Israeli” officials claim, we will never respond to that and fall in their trap,” he underscored, as His Eminence lauded Lebanese FM Gibran Bassil’s initiative and advanced diplomacy to initiate a tour for Foreign ambassadors in the region to refute “Israeli” Prime Minister Benjamin Netanyahu's claims about the presence of missile plants near Beirut airport.

According to His Eminence, “Our policy is based on “constructive silence” and we do not give 'free information' to the enemy.”

Sayyed Nasrallah further said: “No one must aid the enemy in its psychological warfare against our country and government,” warning that the Zionist entity sought to “scare and intimidate people” through SMS messages.

“I want to thank people for their sarcastic responses to the allegations of the incompetent 'Israeli' officials. This is the responsibility of everyone in Lebanon,” Sayyed Nasrallah added.

Turning to the Lebanese internal front, Hezbollah Secretary General highlighted that nothing is new at the level of the government’s formation.

“We are waiting for what the coming days will carry and we stress the importance of speeding up the formation process,” he said, pointing out that “neither Syria nor Iran are interfering in this Lebanese internal affair.”

On another level, Sayyed Nasrallah hailed the late mother of martyrs, as he thanked all those who condoled the family as well as Hezbollah over the pass away of Hajja Um Imad

“Um Imad was a model for a believing, steadfast and a Muslim mother.” He said, noting that “she was proud of what God chose for her children.”

Sayyed Nasrallah further hailed the mother of martyrs as “a permanent figure in the martyr’s Leader life and was present in the various decisions and fateful choices he made.”

“Um Imad was strongly present during the past few years in the martyrs' homes. The late mother was active in the battle of stabilization in face of discouraging. Um Imad has a founding role in the Resistance, as well as in the institutional and organized work.”

His Eminence went on to say: “Um Imad is a symbol of our Resistance, struggle, steadfastness and victories and will remain so, reiterating that “our choices are of heavy price in which blood and best youth are sacrificed.”