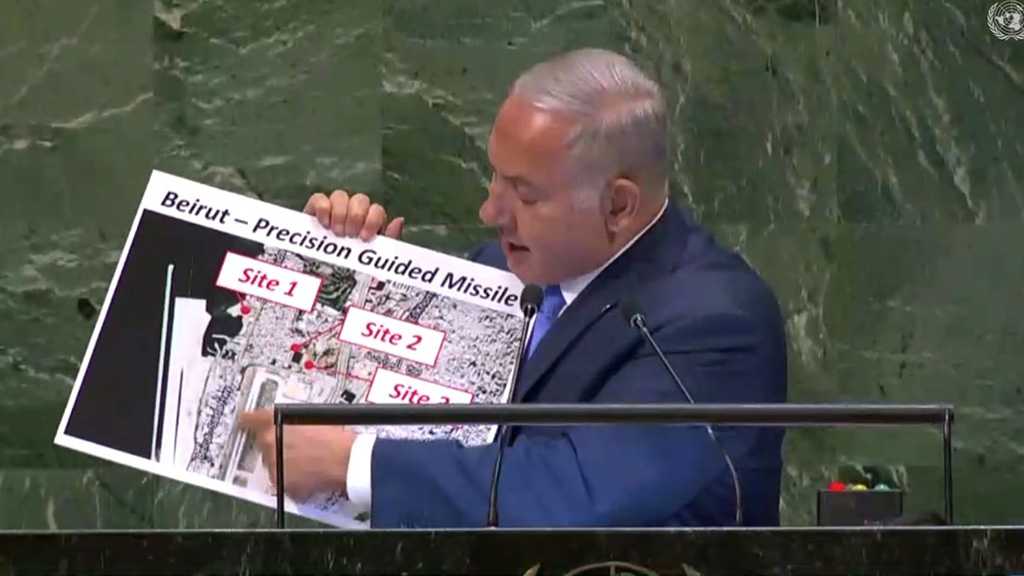 In a typically farcical performance at the United Nations General Assembly on 27 September, “Israeli” Prime Minister Benjamin Netanyahu took the opportunity to update the world on the alleged activities of his favorite cross-border nemesis: Lebanon’s Hezbollah.

According to Netanyahu’s visual aid – a conspicuously marked diagram – Hezbollah is currently presiding over three secret sites near Beirut’s international airport where, under orders from Tehran, regular old missiles are being converted into precision-guided ones. In other words: the airport and whatever humans might find themselves in the overcrowded vicinity are fair game in any impending conflict.

In response to the allegations, Lebanese Foreign Minister Gebran Bassil accompanied an array of foreign diplomats and journalists on a tour of the supposed missile sites, emphasizing his view that Israel is simply seeking to “justify another aggression” against Lebanon - a valid assessment, given “Israel’s” track record of invading, bombarding and occupying its northern neighbor.

The tour took place on 1 October, and, as expected, produced no evidence of the missile conversion process.

That same day, the “Israeli” military tweeted its own opinion that “#Hezbollah has a long history of covering up inconvenient truths and then parading foreign officials around” - a rather brazen claim from a country that has spent the past seven decades covering up the fact that it happens to be founded on a policy of ethnic cleansing and slaughter.

As for the business of parading foreign officials around, the whole matter of “Israel’s” not-so-secret nuclear arsenal comes to mind - which, I dare say, poses a slightly more apocalyptic threat than Hezbollah’s missiles, precision-guided or not.

A 46-second video accompanying the “Israeli” military tweet begins by reminding us that “three days ago, the ‘Israeli’ PM exposed [Hezbollah’s] facilities near Beirut’s international airport”.

The video then proceeds to offer some examples of all of the things that can be done over the course of three days, such as fly around the world, climb Mount Meru in Tanzania, “binge on 60 episodes on Netflix”, order and receive a package from Amazon, read a book, travel from Berlin to Prague on foot, and so on.

The upshot, naturally, is that three days is more than enough time to clear out a precision missile factory in Beirut, “invite foreign ambassadors, and hope that the world will fall for it”.

As for what the “state of ‘Israel’” is capable of accomplishing in three days, aside from inundating the internet with propaganda, we might recall a certain three-day “Israeli”-orchestrated massacre of up to several thousand civilians in the Beirut Palestinian refugee camps of Sabra and Shatila in 1982 - the same year that a particularly bloody “Israeli” invasion of Lebanon killed some 20,000 people, the vast majority of them civilians.

And guess what: It was none other than this very invasion that prompted the formation of Hezbollah, against which “Israel” must now “defend itself” by continuing its murderous antagonization of Lebanon.

While the whole world may not “fall for it”, “Israel’s” tiresome “self-defense” mantra is forever gobbled up and regurgitated by the United States – a trusty ally that could also be depended upon for, inter alia, rush shipments of bombs to the “Israeli” army as it went about pulverizing Lebanese territory in July and August of 2006.

The 34-day assault eliminated an estimated 1,200 people in Lebanon, with “Israel’s” choice of targets ranging from children in a pick-up truck to national highways, bridges and the Beirut airport. It’s thus not totally clear why “Israeli” officials have, since 2006, felt the need to stipulate that they will no longer distinguish between Lebanon and Hezbollah in any future showdown.

Netanyahu’s airport-missile-site fixation will presumably only assist in the supposedly novel cessation of distinction.

To be sure, this is hardly the first time the “Israelis” have unfurled diagrams highlighting the allegedly terroristic features of the Lebanese landscape. Back in 2016, former “Israeli” ambassador to the United Nations, Danny Danon, presented to the UN Security Council a handy map of the south Lebanese village of Shaqra - pardon, the “Shaqra fighting complex”, as the image was labelled.

Multicolored markings in between schools, mosques and cemeteries purported to denote the multitude of arms depots, rocket launchers, anti-tank positions and other highlights of Shaqra - none of which I myself have ever managed to stumble across, despite several visits to the diminutive village, though I have observed many schoolchildren, hair salons, farms, bakeries, a Botox establishment, an entity called “Magic Land”, and a painting of Che Guevara.

As we know from “Israel’s” behavior in the Gaza Strip, where thousands of Palestinian civilians have been slaughtered over the past decade alone, Arabs are often granted only two identity options: terrorist or human shield. The demise of any human shield at the hand of “Israel” is automatically the fault of the terrorists.

Forget schoolchildren and Magic Land; the “Shaqra fighting complex” approach symbolically clears the area of anyone with a claim to the title of “civilian”, thereby preemptively exonerating Israel for potential war crimes.

Obviously, the point of taking issue with “Israel’s” latest anti-Hezbollah agitation is not that Hezbollah doesn’t have weapons; it does, and for good reason, many argue, given the modus operandi of its predatory neighbor.

Last month, Hezbollah leader [His Eminence Sayyed] Hassan Nasrallah even boasted of possessing precision missiles - which, again, would appear to be a logical deterrent against established “Israeli” belligerence.

The point, rather, is that a country that harbors a giant, undeclared nuclear arsenal and has for the past 70 years engaged in all manner of conventional brutality and violence is in no position to be lecturing anyone on anything - diagrams or no diagrams.

In its video-tweet re the alleged missile production sites, the “Israeli” military posed the abbreviated question: “Maybe this time ask why missile workshop located so close to int’l #airport in heart of #Beirut?” followed by the oh-so-hashtag-savvy “#maybethetruththistime”.

Plenty more thought-provoking questions could of course be asked, such as why “Israel” has utilized flesh-incinerating white phosphorus on civilians, massacred unarmed Palestinian protesters and medics, and jumped at every chance to pave the way for yet more bloodshed.

The short answer in all cases is that the Israeli enterprise is itself predicated on violence - and that’s the enduring truth.