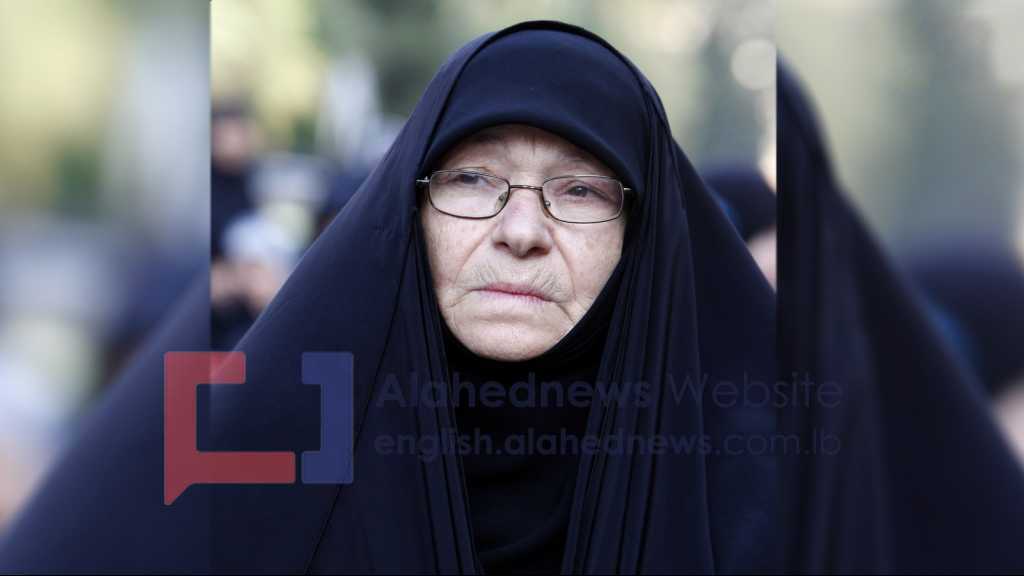 She spent most of her life on the path of resistance as a teacher and consoling those who lost loved ones. Um Imad Mughniyeh passed away at the age of 80. The people of the resistance called her the “mother of the martyrs”. The departed Amina Salemeh Mughniyeh (Um Imad) is leaving behind a lifetime of resistance, steadfastness and patience.

She is the mother of three martyrs, Jihad (1984), Fouad (1994) and Imad (2008). The public got to know her after Imad’s martyrdom. She then became an icon within the resistance community and among the families of the martyrs.

Um Imad was not only a mother of three martyrs but in 2015 she became a grandmother to another martyr, Jihad Imad Mughniyeh. Jihad’s picture was added to the pictures of her three martyred sons that decorated the living room wall of Hajj Abu Imad. An “Israeli” helicopter assassinated Jihad, who was among a group of resistance fighters in Syria’s Quneitra governorate located along the border with the occupied Golan Heights.

Amina Salemeh, the wife of Fayez Mughniyeh, was no stranger to resistance work and Islamic advocacy in Lebanon. Um Imad was at the forefront of the women who were working at the onset of the Islamic awakening in Lebanon. She was among the first to spread the school of martyr Mohammed Baqir al-Sadr among women. She had a special interest in the Palestinian cause and its importance within the Islamic awakening following the victory of the Islamic Revolution in Iran.

During successive periods, the late Um Imad was able to offer the resistance her children as fighters and martyrs. People close to the family speak of how she kept pace with all the stages of martyr Imad Mughniyeh’s work within the resistance. She never failed to perform various tasks within the resistance even in the darkest and most difficult circumstances.

The resistance in Lebanon and Palestine as well as all the resistance movements in our region and the world have lost a role model who played her part in the resistance and liberation as she worked on spreading the message of the resistance through both words and actions.