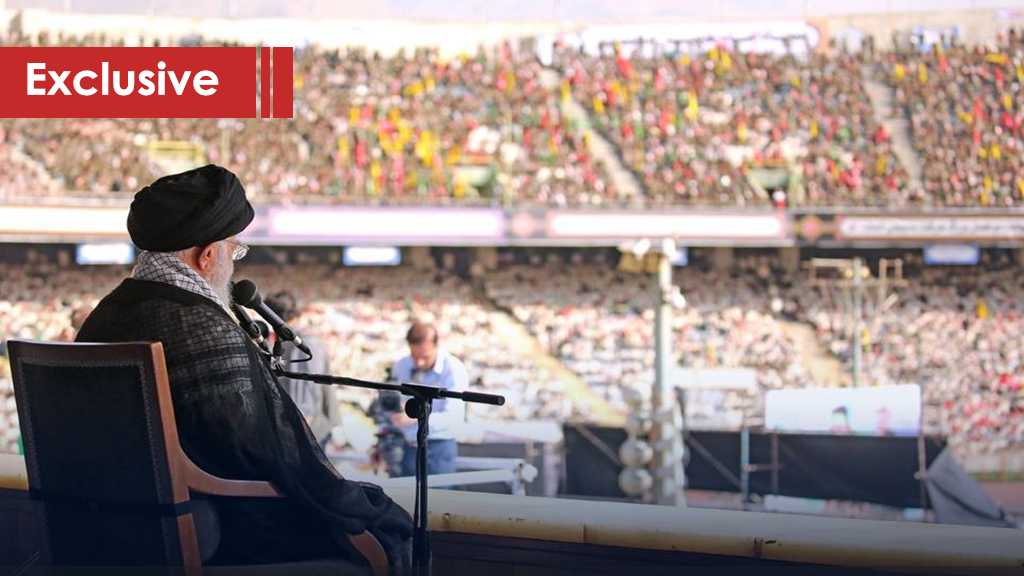 Political analyst: US main instigator of sedition in the region

Two major anti-Iranian events have been in the spotlight lately, the Ahvaz terrorist attacks that killed innocent people as young as a 4-year-old child and the ongoing US government threats of devastating sanctions to be launched on the 4th of November.

Attacks were carried out in Ahvaz at an Iranian parade commemorating the inception of the Imposed war on Iran by the Saddam regime to be later adopted by Daesh [the Arabic acronym for terrorist ‘ISIS/ISIL’ group]. However, the attack did not affect Iran’s security and rather brought the Iranians together; just like two previous attacks that were the only assaults the enemies could carry out in Iran during the past few years.

Attempts of foreign players to destabilize Iran have proven to be futile, as Iranian popular strength weighs out the different threats looming in the horizon. The US has arrived at sanctions as a last desperate solution to counter the Islamic Republic of Iran.

However, Leader of the Islamic Revolution His Eminence Imam Sayyed Ali Khamenei declared in a speech addressing around a hundred thousand people at the Azadi stadium that economic sanctions are more fragile than Iran’s national economy.

In an interview with Al-Ahed news on these matters, Iranian political analyst and Middle East expert Dr. Masoud Asadollahi shed light on important points that were raised by Imam Khamenei during a speech he gave to a large gathering of Iran’s Basij [mobilization] volunteer forces and senior military officials at the Azadi Stadium in the capital last Thursday. He also commented on the Ahvaz attacks and the Iranian retaliation to such act of violence, underscoring that Iran is capable of stronger responses in any instances in the future.

US main instigator of sedition

According to the analyst, Imam Khamenei wanted to focus in his speech on the US as the major source of strife in the region. “Ayatollah Khamenei preferred to focus on the US rather than focus on agent countries, since it is the number one instigator of sedition in the region.”

Imam Khamenei stressed during the speech that preventing the formation of an Islamic power in Southwestern Asia is what the US and the Zionist Regime seek; adding "They know that the fascinating message of Islam is defending the oppressed and the underprivileged; thus, they fear the formation of a power based on Islam."

“In Iran, Imam Khamenei and the Islamic Republic of Iran consider the US as the source of all strife and instigation, especially since Trump came to office. He clearly demonstrates the US government’s hatred and animosity towards Iran. What we saw from previous US Presidents was hypocrisy; they always spoke of negotiations and political solutions with Iran. These previous presidents always claimed that they do not aim for “regime change” in Iran; however they were seeking to topple the Iranian government behind the scenes,” explained Dr. Asadollahi.

He went on to say “Trump, unlike previous presidents, revealed the real face of the US. Unfortunately, some Iranian officials seek negotiations with the Trump administration, which in my opinion is a big mistake since we see how Trump deals with his own allies. During the past few days, we heard Trump’s statement against the Saudi regime, where he noted that the Saudi regime would not be able to last two weeks without US support. Again I reiterate that Ayatollah Khamenei wanted to deliver messages to the US and its allies that they fear Iran and that their attempts will fail, and to some politicians inside Iran telling them that negotiations with the Trump administration are unreliable and cannot be trusted.”

Stronger and wider response if…

In addition to Imam Khamenei’s speech, an earlier message sent to the US and its agents, according to the analyst, was through the Revolutionary Guards’ missiles hitting Daesh targets in the East of Euphrates, which came in response to the Ahvaz attacks.

“The targets hit by the Revolutionary Guards in East of the Euphrates were located really close to US forces present in the area;  only three miles [five km] from the US position as declared by the spokesman of the Western coalition.”

Iran fired six medium-range ballistic missiles across Iraq and into Syria in what it declared as a strike in retaliation for the attack in Ahvaz, Iran, on Sept. 22 against a military parade in which at least 25 people were killed, including 12 members of the elite unit plus civilian spectators and at least one young child. The target of the missiles was the headquarters of Daesh in the eastern Euphrates River valley, close to Syria’s border with Iraq.

According to Dr. Asadollahi, bizarrely, the area is one of the last strongholds of the terrorist group Daesh, and has also been the site of recent American military activity.

“Here lies a big question; if the US forces are that close from the Daesh headquarters, why do not they try to terminate them in Syria? Not long ago, the US justified their presence in Syria as a need to defeat Daesh. However, it is clear that it has not been fighting the terrorist group and has been using them as a pretext to justify their stay in Syria, especially in the East of the Euphrates.”

On this same note, Mohsen Rezaei, who formerly led the Guard, praised the missile strike on Twitter, and was quoted as saying that the “main punishment is on the way,” suggesting more attacks could be imminent. However, the Middle East affairs expert said that “What Rezaei meant was that Iran’s capabilities is a lot more than what the world saw from a few missiles on the East of the Euphrates which were precise and hit the target.”

He added “Iran can respond to any other terrorist attacks with a stronger and wider response. The response we saw was more than enough because it killed dozens of Daesh members including Generals, and I do not think there is a need for another response unless Daesh carries out another attack.”

However, and back to Imam Khamenei’s speech, Dr. Asadollahi underlined that the Islamic Revolution did not address but the US since Iran sees it as the master of all evil and there was no need to touch on the Ahvaz attacks; the response was already made and the message was delivered to agent countries.

Answering al-Ahed news what his take is on some claims that Iran’s security is at stake especially after the Ahvaz attacks, the analyst noted: “I do not agree that the security of Iran is in danger. If we look at the world map, Iran is one of the biggest countries in the world; it shares long borders with 15 countries. Despite these long and vast borders, Iran’s security is very stable and this means that the military and security forces and apparatuses in Iran are in total control of the situation and have the upper hand.”

He pointed out that three attacks extending over a period of a few years does not mean the security of the Islamic Republic is in jeopardy.

“If Iran was not secure, we would have seen what we witnessed in Syria and Iraq including booby-trapped cars, assassinations, non-stop terrorist attacks and wars. However, during the past few years, only two or three attacks were perpetrated in Iran, which for a country like Iran is considered as a great accomplishment. We cannot say that the situation is not stable in Iran and that security is in danger.”

He further elaborated: “We have seen such terror attacks in many of the world countries such as France, Britain, and the US itself. If terror attacks continue on almost daily basis and spread across the country, then we can identify the security of a country as unstable and at stake. However, this is not the case in Iran.”

Trump has nothing to bring on

Commenting on Imam Khamenei’s stance on the Iranian economy, Dr. Asadollahi reminded that the leader of the Islamic Revolution has been focusing on the economy in Iran since long ago, and he had suggested what he dubbed “the resistance economy”.

“Ayatollah Khamenei always pointed out to the fact that part of the economic burdens in Iran is due to internal problems, and that not all the problems come from abroad. Therefore, he always reiterated that to allow for a better economy, both levels, the domestic and the international should be given enough attention and tackled. Facing foreign conspiracies and pressures as well as resolving domestic obstacles that do not allow economic growth are equally important.”

The expert stressed that Imam Khamenei has been always keen on a proper economic plan in Iran and has been giving advice to the Iranian government and this is not something new. However, he reminded during his speech of the necessity of resolving domestic economic issues and reassured that nothing can harm Iran and its economy.

Dr. Asadollahi believed that Imam Khamenei’s confidence that the sanctions are too weak to affect Iran’s economy is in place. “Trump declared that November 4 will mark the launching of new sanctions against Iran, which he described as unprecedented throughout history. Though, practically the Americans were in a rush and put many of these sanctions into practice already. The US thought that the Iranian summer would witness unparalleled unrests. We observed the devaluation of the Iranian Rial in face of the US dollar, which reached its peak a few weeks ago. Therefore, sanctions were put in practice and November 4 does not mean anything new will happen.”

He added “Thankfully, Iran has been able to deal with the sanctions, and according to precise information, we have some six months ahead, and if we deal correctly with the situation we will be able to overcome this economic war, especially since the US cannot proceed with such a war for long because the first to be harmed by these sanctions are US allies.”

Dr. Masoud also stressed that Trump’s claims that he will not allow the export of even one Iranian oil barrel after November 4 is nonsense. “No one can prevent Iran from selling oil internationally. The world market, especially with the coming of winter needs tremendous amounts of oil; therefore, everyone says that the US will not succeed in preventing the selling of Iranian oil.”

On this note, Imam Khamenei had said during his speech: “Our national economy can defeat sanctions,” adding “The defeat of sanctions will be America’s defeat, and the US, with this defeat, should once again be slapped in the face by the Iranian nation, God willing.”

On a final point, Dr. Asadollahi underscored an important issue, that Imam Khamenei has strong hope in the youth of the country and in popular will.

He went on to say “The generation that lived the Saddam-imposed war on Iran witnessed dangerous phases, however, it was always owing to popular support that the Iranian government was able to remain steadfast and get over these crucial times. Consequently, Imam Khamenei is sure that Iran will triumph there is no doubt about that, mainly owing to this huge popular support.”

Dr. Asadollahi concluded “Ayatollah Khamenei is basically focusing on the fourth generation of the Islamic Republic to clarify any misconceptions, especially since this generation is under a lot of pressure because of the soft and psychological war launched against the Iranian people from abroad. He focused on the fact that the youth are the solution to all problems, unlike many other governments which see the youth as the essence of all problems.”

The bottom line that the US and its allies have to understand is as was stated by Imam Khamenei; the Iranian nation is invincible, which is rooted in its 1979 Islamic Revolution, its eight-year Holy Defense of the country against the ex-Iraqi regime’s war in the following years, and in general, its steadfast resistance over the past 40 years in the face of all enemy plots owing to its Islamic identity and its major belief of fighting oppression.