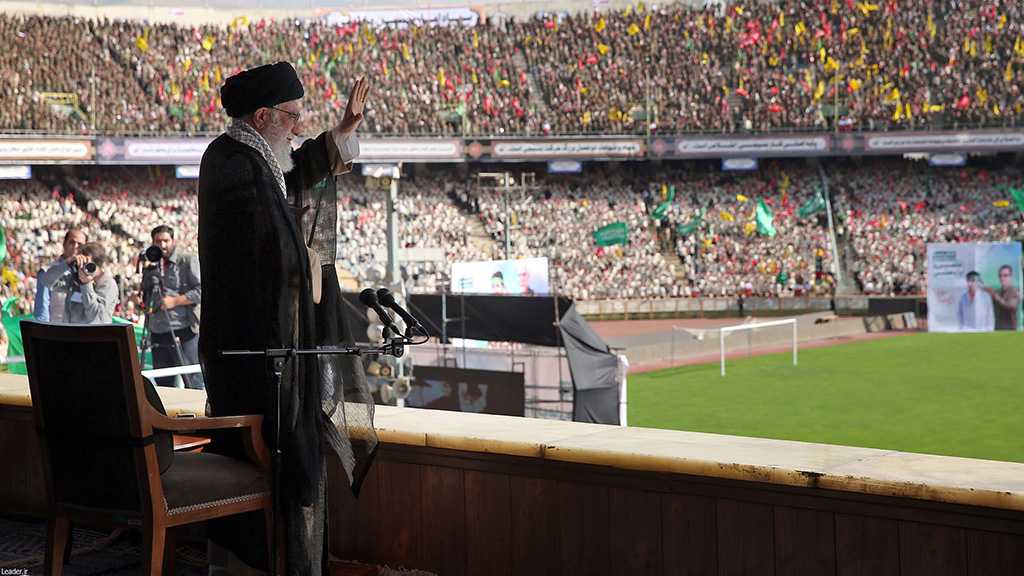 At Azadi Stadium in Tehran Province, Imam Khamenei delivered a speech to hundreds of thousands of Besij members [the Mobilized Forces], saying that the United States is “weak and it has a weak logic”.

The Leader spoke of American hypocrisy saying that it is “crystal clear to us”, noting the importance to “understand the presence of the enemy; If not then we won’t have the right weapons.”

Furthermore, Imam Khamenei emphasized that the US which Tehran “has dealt a big blow to, hates Iran”.

In his address, the Leader spoke of the US bragging about its “liberal democracy”, saying “it is a source of serious criticism today, across the world”.

“The US claims to have strong soft power, but in reality it’s the weakest”, he went on to say, adding that “the US has been defeated in Iraq and Syria; and it awaits more defeats which the entire world will witness”.

Imam Khamenei refuted US claims of strength, accusing of being “a big lie”.

Nonetheless, His Eminence shed light on how the US uses media to mislead the world about Iran saying, “I lately heard that Trump told some European leaders: let us wait for a few months and we’ll see Iran uprooted and collapsed. Forty years ago they said the same words, but we see where Iran is today!”

“We tell America the cat dreams of mice!” Imam Khamenei said, mocking the US. He explained this by saying, “One of our infallible Imams said: Grace to God who gave us fool enemies”, stressing that “The US doesn’t know Iran well and this is why it’s totally misled”.

Elsewhere in his speech, Leader of the Islamic Revolution tackled the issue of Iran’s economy. His Eminence said that although the country faces economic and oil-related problems, one should “realize the power of Iran, its natural resources and riches”.

The Leader told the audience that “Iran will never kneel before America, as the enemy seeks for it to arrive at a dead end.”

However, Imam Khamenei assured that he “will not allow that to happen in the country” with the help of the nation.

His Eminence warned the US saying it “will receive another blow from the Iranian people because we will be able to defeat its new siege”.

Imam Khamenei stressed the importance to “monitor all what is related to the enemies and from which frontiers they infiltrate to attack Iran”, adding that “Today the enemies are using emerging technologies and media to distort the image of the Islamic Republic.”

The Leader explained that “the enemies are also at odds with us also in terms of military power”, adding that “Whatever makes Iran strong scares the enemy”.

In his speech, His Eminence emphasized that “Until you and I are alive we won’t allow traitors to distort Iran’s image”.

Imam Khamenei further advised that “both youths and authorities should convey a message of power to the enemy not a message of weakness.”

The enemy, the Leader said, will retreat if it faces national unity, strength and fierce determination, and if officials set aside rifts.

Imam Khamenei concluded that “the Iranian people will not accept humiliation by anyone”.