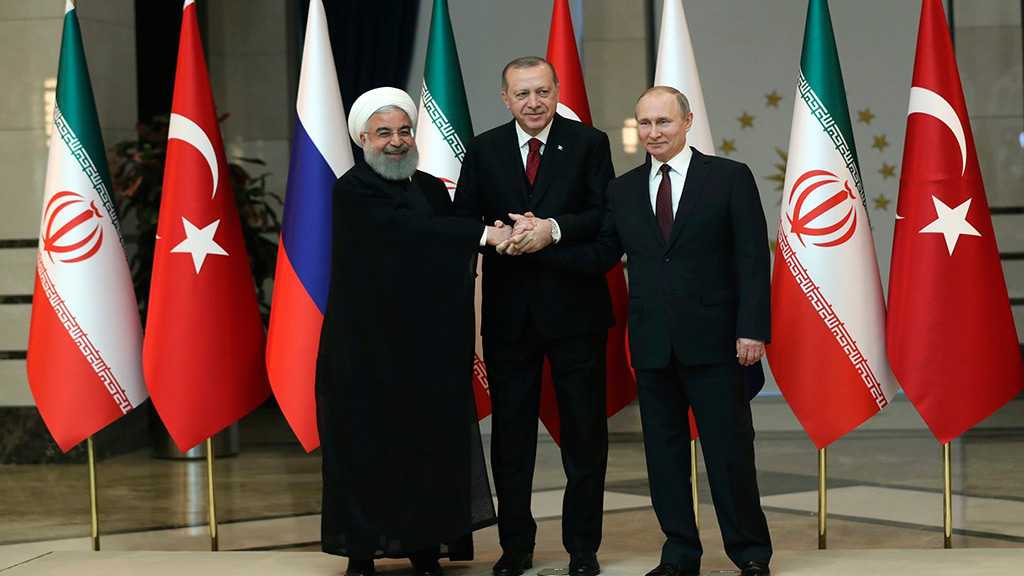 The presidents of Russia, Turkey, and Iran are meeting in Tehran on Friday for the third trilateral summit to discuss the situation in Syria.

Russian President Vladimir Putin stated during the meeting in Tehran that terrorists in the rebel-held Syrian city of Idlib are preparing provocations involving chemical weapons.

"The remaining groups of extremists [in Syria] are currently concentrated in the de-escalation zone in the province of Idlib. Terrorists are making attempts to disrupt the ceasefire, moreover, they are carrying out and preparing various kinds of provocations, including using chemical weapons," the Russian President stressed.

He also noted the significant progress in ensuring long-term normalization in Syria.

"I would like to note that the decisions of the two previous summits of the guarantor states of the Astana process are being successfully implemented, and significant progress has been achieved in ensuring long-term normalization in Syria," Putin said.

Addressing the issue, Iranian President Hassan Rouhani said that the civilian population in Idlib should not suffer during the counter-terrorism operations.

"Fighting terrorism in Idlib is an integral part of the mission of establishing peace and stability in Syria, and civilians should not suffer from this fight," Rouhani said at the summit.

"The only goal in Syria and the region can only be peace, but to achieve sustainable peace, a serious fight against terrorism is inevitable," the president added.

For his part, Turkish President Recep Tayyip Erdogan said, in turn, that Ankara is "extremely annoyed" by the United States' support of Kurdish YPG in Syria.

The situation in Syria's northwestern Idlib province, the last major terrorist stronghold, is expected to be one of the key topics at the summit. According to the Kremlin, the insurgent hotbed in Idlib destabilizes the situation in Syria and undermines work toward a political settlement of the conflict.

Russian officials, moreover, have repeatedly warned that terrorists were planning a false-flag chemical weapons attack in Idlib with the aim of provoking Western retaliation against the Syrian government.