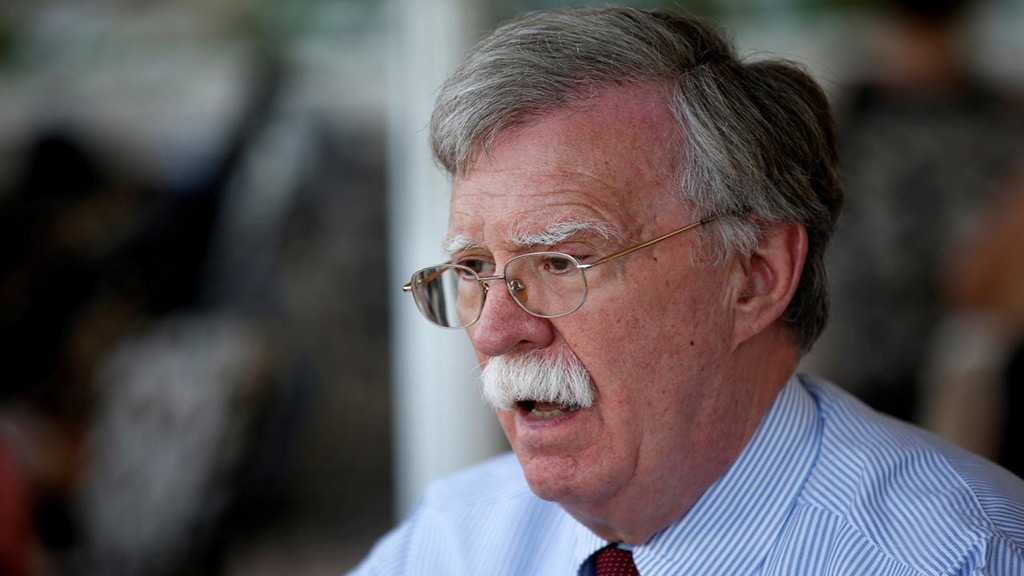 During a visit to the “Israeli”-occupied territories, US National Security Adviser John Bolton has claimed that Russia is currently “stuck” in Syria, and that Washington could use this situation as leverage to push for an end to Iran’s mission there in future contacts with Moscow.

In an interview with Reuters in occupied al-Quds [Jerusalem] on Wednesday, Bolton said the US would seek to reach an understanding with Russia on the role of Iran in Syria. Both Tehran and Moscow have been assisting the national army to rid the country of a myriad of foreign-backed terror groups.

“We’re going see what we and others can agree in terms of resolving the conflict in Syria. But the one prerequisite there is the withdrawal of all Iranian forces back in Iran,” said the US official.

Tehran has been offering military advisory assistance to the Syrian army at the request of the Damascus government.

Bolton further claimed that Washington wielded leverage in its discussions with Moscow as “the Russians are stuck there at the moment,” adding, “I don’t think they want to be stuck there.”

The US official further claimed that Moscow was seeking to abdicate responsibility for funding the Syria reconstruction process.

“I think their frenetic diplomatic activity in Europe indicates that they’d like to find somebody else, for example, to bear the cost of reconstructing Syria - which they may or may not succeed in doing,” he added.

Bolton also noted that Russian President Vladimir Putin had told his American counterpart, Donald Trump, during the July 16 meeting in Helsinki that Moscow could not force the Iranian advisors out of Syria.

“We’re obviously going to talk to him (Putin) about what role they can play,” he said, referring to his upcoming meeting with his Russian counterpart, Nikolai Patrushev, in Geneva.

The Syrian army managed to drive the terrorists out of most parts and end the Wahhabi Daesh’s [Arabic acronym for “ISIS” / “ISIL”] territorial rule with help from Russia and Iran. It is now on the verge of fully liberating the southern parts near the “Israeli”-occupied territories, prompting serious concerns in Tel Aviv, which supports the terrorists operating there against Damascus.

Syria is now preparing for an operation to liberate Idlib Province, the last major militant stronghold.

Russia and Iran – together with Turkey – have also been mediating a successful diplomatic process, which has brought the warring sides to the negotiating table.

Elsewhere in his interview, Bolton said that Washington’s contacts with Moscow did not include any understanding about a planned military operation by the Syrian army to retake Idlib Province.

He, however, warned that the US would respond “strongly” to any use of chemical or biological weapons there.

“But we’re very concerned as we look at the military situation and we want to be unmistakably clear to [Syrian President Bashar] Assad that we expect there will be no use of chemical weapons or biological weapons if there are any additional military hostilities in Idlib,” he said.

An alleged chemical weapons attack hit the Damascus suburb town of Douma on April 7,  just as the Syrian army was about to win the battle against the militants there.

Western states blamed the Syrian government for the incident, but Damascus firmly rejected the accusation.

One week after the suspected gas attack, the US, Britain and France launched a coordinated missile strike against sites and research facilities near Damascus and Homs with the purported goal of paralyzing the Syrian government’s capability to produce chemicals.

Bolton also said that the US administration was not discussing possible recognition of the occupied side of Syria’s Golan Heights as “Israeli” territory.

In 1967, the “Israeli” entity waged a full-scale war against Arab territories, during which it occupied a large swathe of Syria’s Golan Heights and annexed it four years later, a move never recognized by the international community.

The entity has built dozens of illegal settlements in the occupied Golan Heights since its occupation, and has used the territory to carry out a number of military operations against the Syrian government in support of the terrorists wreaking havoc on the Middle Eastern state.

Yisrael Katz, the entity’s intelligence minister, told Reuters back in May that Tel Aviv was pressing Washington to recognize Golan.

The Trump administration has already recognized al-Quds as the so-called “capital” of the entity and moved its embassy from Tel Aviv to the occupied Palestinian city.