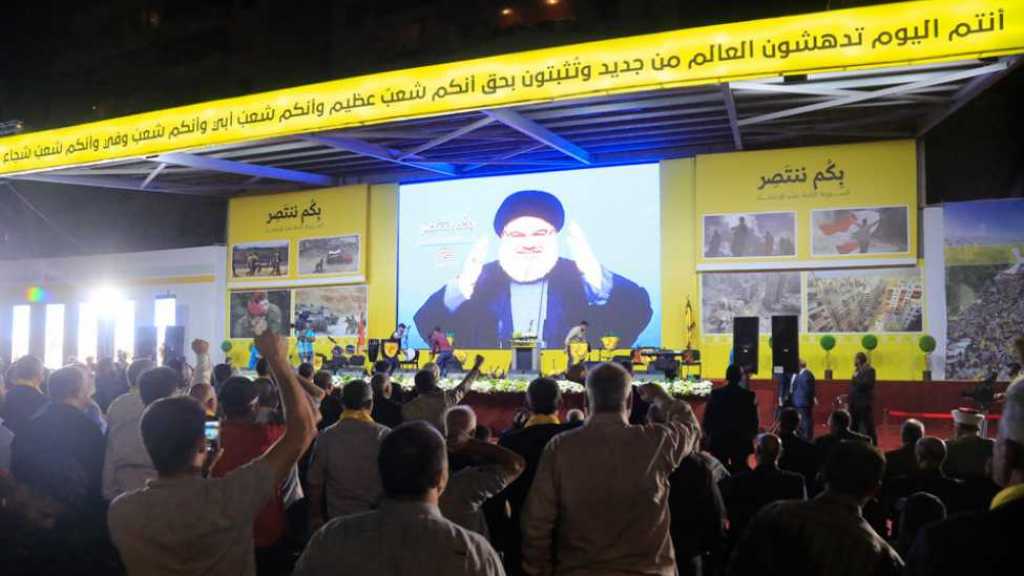 Hezbollah Secretary General Sayyed Hassan Nasrallah delivered on Tuesday a speech in which he tackled various regional and Lebanese files.

“Today we celebrate victory and we insist to mark this occasion, as we will also celebrate next week the first anniversary of Second Liberation when Takfiri terrorists were defeated in our land,” His Eminence announced.

He further praised Iran and Syria for their steadfastness and the crucial supporting role they played in 2006 victory.

Back to the anniversary, Sayyed Nasrallah explained that “the objective of the July 2006 “Israeli” war was to crush the resistance either militarily or to force it to hand its weapons.”

Meanwhile, he went on to say that “The new era after 2006 war witnessed regional wars to implement their previous goals as well as “Israel’s” hegemony.”

However, the Resistance leader assured that “As we- in Hezbollah- won the July 2006 war, we – in the Resistance axis-will emerge victorious from the war on terror in Syria.”

“The events of the past seven years have been a “greater July war” aimed at achieving the same objectives,” Sayyed Nasrallah said, pointing out that “”Israel” today is working with all its schemes on the basis that it’s facing a great and capable enemy.”

On this level, he repeated that the Resistance today- in 2018-is in its greatest capabilities.

“Twelve years, and they are threatening us with war. However, it [“Israel”] talks about the increase of the forces of the resistance and says its army is the second strongest army in the Middle East after the “Israeli” Arm.”

According to His Eminence,” This is not accurate. Hezbollah is stronger than the “Israeli” Army. ”Israel” has been rebuilding its military capabilities and plans since 2006 due to the presence of a real and alarming force in Lebanon that represents a central threat to it.

“Hezbollah might not be the strongest army in the Middle East but it is certainly stronger than the “Israeli” army,” he mentioned noting that “The Lebanese resistance - with its arms, personnel, expertise and capabilities- is stronger than ever.”

Sayyed Nasrallah also stressed that “”Israel” today is weaker than to launch a war as the previous one.

““Israel” has been rebuilding its military capabilities and schemes since 2006 due to the presence of a real, strong and alarming force in Lebanon that represents a central enemy to it,” he added.

From the Resistance side, Sayyed Nasrallah highlighted that “Israel” has been watching Hezbollah’s growing military capability in Lebanon and Syria since 2006.”

“We in Hezbollah are not scared of a potential war with “Israel”. No one should threaten  or scare us with war. We are not scared or worried about war and we are ready for it and we will be victorious,” he confirmed.

In addition, His Eminence underscored that “for twelve years, “Israel” has been threatening us with  war. However, it is aware and talks about the increase of the resistance’s force and capabilities. It says that Hezbollah is the second strongest army in the Middle East after the “Israeli” Army. This is not accurate. Hezbollah is stronger than the “Israeli” Army.”

“The resistance in Lebanon today, in its possession of weapons and equipment and capabilities as well as its members, cadres,  ability, expertise and experience, as well as its faith, determination, courage and will, is stronger than at any time since its launch in the region,” he confirmed.

Meanwhile, His Eminence warned that “there are major US pressures on the Lebanese state to settle the issue of the territorial and maritime borders to serve the “Israeli” interests, and this includes both the oil and gas.”

However, His Eminence assured that “this era is over.”

In parallel, he reiterated that “Israel” participated in the war on Syria by supporting the armed terrorist groups.

“The “begging” battle waged by Netanyahu is to force Hezbollah and Iran out of Syria,” Hezbollah Secretary General stressed.

On another regional level, Sayyed Nasrallah predicted that the so-called “deal of century” is doomed to fail as it faces real problems. “If we set up several equations we will thwart this scheme,” His Eminence said.

“The first indication of the 'deal of the century’s' fall  is being rejected by all Palestinians,” he added, noting that “no Palestinian leader can handle the responsibility of signing a deal that recognizes Al-Quds as capital of the Zionist entity.”

In this context, the Resistance Leader elaborated that “the victories scored in Iraq and Syria parallel to Iran’s  resilience contributed to the failure of the 'deal of the century', given that the Saudi-led axis is suffering retreat in the region.

On another level, Sayyed Nasrallah assured that Iran will withstand US sanctions imposed by US President Donald Trump’s administration as the remaining bet for the “Israeli” and the American is sanctioning Iran.

“Iran has been facing sanctions since the victory of the Islamic Revolution in 1979... [Trump] is strengthening the sanctions but they have been there since 1979 and Iran stayed and will celebrate the 40th anniversary of the victory of its revolution,” he added.

His Eminence further emphasized that he has accurate information that some are building dreams, strategies and schemes that Iran will fall into chaos and fall. “This is illusion, this is imagination and has nothing to do with reality,” Sayyed Nasrallah noted.

“They [the West] can’t go to war with Iran, so they impose sanctions, so it would pressure people and cause a fall in the local currency and economic decline,” he explained.

His Eminence went on to say: “The Islamic Republic of Iran today in our region is stronger than ever. It is the strongest.”

Slamming the Saudi brutality in Yemen, particularly the recent massacre against a children bus, Sayyed Nasrallah stated: “From Dahiyeh in Lebanon to Dahyan in Yemen's Saada, we tell the families of the martyr children that the killer is the same.”

According to His Eminence, “Saudi Arabia is rejecting Canada's interference although it intervened and fought in Syria and Iraq and has been interfering in the Lebanese internal affairs after detaining our legitimate Prime Minister.”

“Let no one threaten us with wars. If anyone wants to wage a war, they are welcome to do so. We are ready for it and we will win,” Sayyed Nasrallah confirmed.

On the internal front, Hezbollah Secretary General cautioned that “Waiting for regional and international changes to form a government does not serve the interests of the participants.”

As he called for avoiding street protests and preserving security in Lebanon, His Eminence urged some Lebanese officials to not commit themselves to stances that they might be obliged to reverse in light of the regional developments.

“Those who want something other than cooperation between Hezbollah and the amal Movement will not get it."