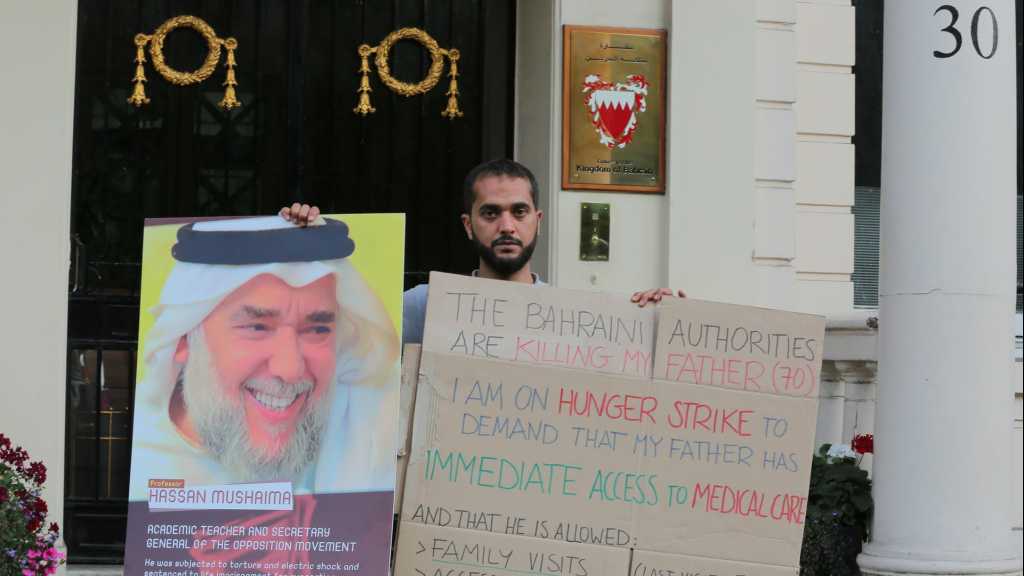 The government of Bahrain is slowly killing my father, Hassan Mushaima. This week I began a hunger strike outside Bahrain’s London embassy to save him.

My father is a leader of the political opposition in our homeland. In 2011 he was at the forefront of Bahrain’s Arab spring protests – a mass movement that peacefully called for human rights and democratic reforms in the authoritarian Gulf kingdom.

Police violently crushed the demonstrations, killing dozens and jailing thousands. Early on the morning of 17 March 2011, security forces broke into our home and arrested my father. Along with other leading human rights defenders and opposition figures – known collectively as the Bahrain 13 – he was tortured and hauled before a military tribunal. After a patently unfair trial, the court sentenced him to life, simply for calling for democracy in Bahrain.

I was part of the same case as my father, but I was convicted in absentia because I was in London at the time; a year later my Bahraini citizenship was revoked. If I return home to see my father, I’ll be jailed along with him.

Throughout this time, Bahrain’s authorities have punished my father by subjecting him to humiliating, inhumane treatment in the kingdom’s notorious Jau prison – a horrific detention center overcrowded with hundreds of political prisoners. The torture my father has endured has caused such severe problems that he has required surgery four times. Jau prison’s abusive and unsanitary conditions have seen his health sharply deteriorate, and authorities are denying him the medical care he needs to survive.

My father is 70 years old and suffers from serious chronic illnesses, including high blood pressure, diabetes, gout and a urinary tract infection. He is in remission from lymphoma. He needs to take many different pills a day to help with these conditions: without them he could die.

Since 2016, however, the government has prevented him from seeing a physician needed to ensure the cancer has not returned, despite the need for screenings every six months. More recently, the authorities have singled out political prisoners for further insulting restrictions on healthcare, forcing them to be strip-searched, chained, shackled, and marched to external facilities if they want to attend medical appointments. Human Rights Watch found that this “degrading” treatment “violates international standards”.

Now my father’s medication is running out, and the government simply doesn’t care. Just last week the UN human rights committee found that Bahrain is failing to meet its treaty obligations under the international covenant on civil and political rights. It cited inhumane prison conditions and denial of medical care for political prisoners.

Despite numerous requests for assistance from my family and international campaigners, Bahrain’s so-called human rights bodies – such as the UK-funded police ombudsman and National Institution for Human Rights – have done nothing but whitewash continued abuses. Earlier this year the NIHR outright denied that my father even had any health problems that required treatment.

Without urgent medication and treatment, my father will die – and Bahrain’s chief western allies in London and Washington are letting this happen.

Since 2012, the UK has provided £5m in “technical assistance” to Bahrain. This was ostensibly meant to facilitate reforms and improve institutions like the ombudsman, but it has had the exact opposite effect: providing diplomatic cover for intensifying repression and police abuse. The UK government is aware of my father’s case, but it has entirely failed to take any action to rectify the situation, merely raising his case “at a senior level”.

Likewise, the Trump administration in the US has signed off on billions of dollars of new arms deals and abandoned human rights conditions altogether. Trump even told Bahrain’s king that there would be no more “strain” between the two countries, effectively green-lighting the kingdom’s bloodiest protest raid in years just days later.

The UK and the US are directly enabling Bahrain’s repression and they’re contributing to the brutal conditions killing my father. But it’s not too late. Leaders in London and Washington can still intervene to save my father and stand up for human rights. I urge them to use their influence to ensure he is immediately provided with the medical treatment he needs to live, and ultimately to secure his release.

Until my father is safe, I have no choice but to follow his commitment to peaceful protest and launch my own hunger strike against oppression. The regime should know that actions against him will not change my political views. The will of the pro-democracy fighters who started the revolution in 2011 against dictatorial rule remains strong, and we are now even more convinced that this regime can’t reformed itself.