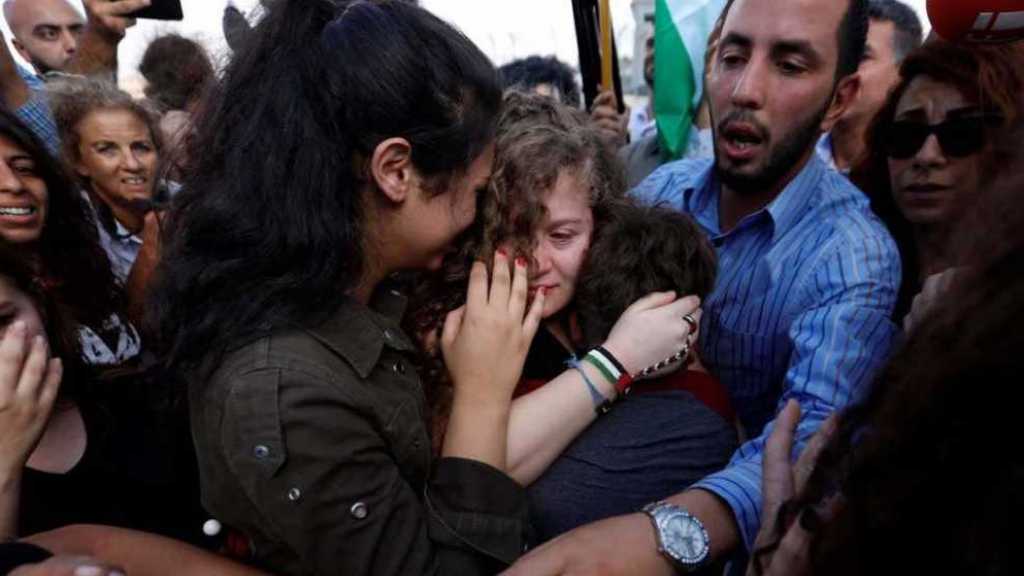 Palestinian teen Ahed Tamimi, who became an international symbol of resistance to the apartheid “Israeli” entity’s occupation after slapping two soldiers, walked out of an “Israeli” prison Sunday and told throngs of journalists and well-wishers with a raised fist that the “occupation must leave.”

In a news conference in the courtyard of her family home, Ahed said that she now wants to study law to defend her people, speaking against the backdrop of a large model of a slingshot meant to symbolize Palestinian stone-throwing protests.

Ahed and her mother Nariman – also arrested in December in connection with the same incident – were released Sunday morning from a prison in northern Israel.

They were driven by bus to the West Bank and were given a hero’s welcome in Nabi Saleh.

“The resistance continues until the occupation is removed,” Ahed said upon her return. “All the female prisoners are steadfast. I salute everyone who supported me and my case.”

The brave girl struck two armed soldiers in frustration after having just learned that “Israeli” troops seriously wounded a 15-year-old cousin, shooting him in the head from close range with a rubber bullet during nearby stone-throwing clashes.

From her home, Ahed headed to a visit to the grave of Palestinian leader Yasser Arafat.

She was then taken with her family to a meeting with Palestinian Authority President Mahmoud Abbas at his headquarters.

Abbas, 83, praised her as a symbol of resistance to occupation.

In an afternoon news conference in the courtyard of the family home, Ahed said that she completed her high school exams in prison, with the help of other prisoners. Palestinian inmates typically organize study courses to complete high school and even university degrees.

“I will study law to defend my people and defend my Palestinian cause in international forums,” she said.

She said her prison experience was tough, and that she missed her old life in the village and her friends. She said she underwent three lengthy interrogations without a female officer present.

Ahed received a call from Turkish President Recep Tayyip Erdogan, who congratulated her on her release, her father said.

Ahed was 16 when she was arrested and turned 17 while in custody. Her case has trained a spotlight on the detention of Palestinian minors by the Zionist entity, a practice that has been criticized by international rights groups. Some 300 minors are currently being held, according to Palestinian figures.