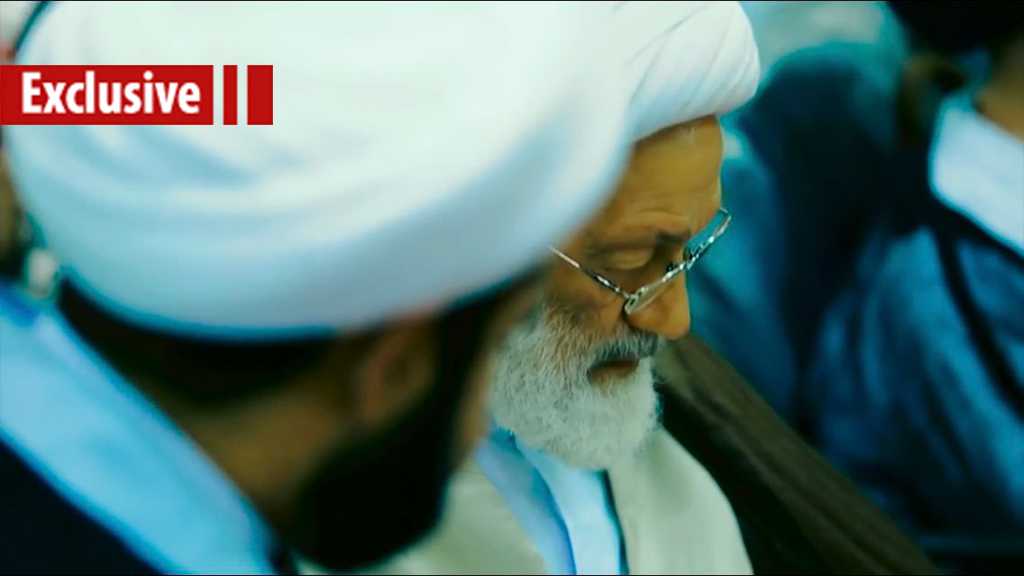 Two years have elapsed since the Bahraini authorities decided to open a tab with Sheikh Isa Qassim; the father of peace who exposed the regime’s brutality and one of the founders of the country's first constitutions that has long been violated by the government. Sheikh Qassim belongs to a pure Bahraini lineage and ancestry and is a pillar that Bahrainis place their faith and hope in. And finally the moment that the regime of vengeance was waiting for arrived.

Since he was stripped of his nationality in June 2016, deportation was the regime’s first priority. This explains the residents’ rush to surround the house of Sheikh Qassim. For more than a year, they remained there around the clock, wearing their shrouds.  Bahrainis gathered at what they called the “Field of Sacrifice”. It was finally cleared with live ammunition that martyred five people. It was then besieged and fenced. His supporters were replaced by the regime’s mercenaries and their armored vehicles. Then came the regime’s actual phase of reprisal, which included house arrest and denial of treatment. It resulted in the deterioration of Sheikh Isa Qassim’s health more than once, leading to his current state.

In twenty-four hours, Sheikh Qassim is expected to leave the homeland of his ancestors to embark on a journey of treatment that the Bahrainis are hoping he would emerge from safe and sound. There have always been two opposite sides in Bahrain. The first is where the people stood firmly. The opposite side is where the regime seeks to impose itself on them. On that side, the regime breathes a sigh of relief. The embattled king rushes to facilitate the Sheikh’s departure – following two years of denying him treatment, by issuing a royal decree.

Fractures and bruises were the last things the Bahraini sources spoke about when they decided to disclose the health deterioration suffered by the country's highest religious authority. But what happened? What development required the Sheikh to travel abroad for treatment? Where would he get treatment? What about the possibility of return for the stateless Sheikh?

Pressing questions emerged following news of Sheikh Qassim’s possible departure to the United Kingdom to continue his treatment after developments in his health situation. Statements that were later issued through the media reinforced the possibility of his departure. Sources close to Ayatollah Qassim concealed some details. The severity of the medical examiner’s results called for confidentiality. There is no place for the bazar of politics that some people utilized even in the most difficult humanitarian circumstances when it touches aspects in this subject.

Details obtained exclusively by al-Ahed website reveal that the Sheikh’s health began to deteriorate last Ramadan. Just before Laylat al-Qadr, Sheikh Isa Qassim was hurt as a result of a fall, which hampered his movement. The 80-year-old man was unable to move for a while. He leaned on family members around him in order to move around his house that was besieged by the regime’s forces and armored vehicles.

"We were afraid that the fall of the Sheikh had caused him to break his pelvis again," an al-Ahed source explained. "But it was confirmed that bruising appeared in the thigh area. But things were not organized in order for him to be transferred to the hospital at the time. After a while, his health improved. He was able to move to perform his prayer standing. His health later suffered a new setback, which was the reason for his transfer to the hospital on June 25. "

The destination was Ibn al-Nafis Hospital, a private hospital located in the capital Manama. There, Ayatollah Qassim underwent tests by a "reliable" medical team, according to sources close to Ayatollah Qassim. He underwent a gastroscopy. The results were shocking!

"Fears of a new fracture were the reason for transferring the Sheikh to the hospital. But after the gastroscopy, it turned out that the disease was located somewhere else. And that is where the shock came from!"

"A serious and sensitive illness demands Sheikh Qassim's travel abroad in order for him to receive treatment as soon as possible," was the diagnosis of the medical team, which confirmed that the cleric’s case had not reached the danger zone and that it was still relatively easy to contain the disease, which turned out to be in its first stages. However, all this entails speeding up traveling abroad to start treatment.

The options were soon limited to three: the United Kingdom, the United States or the American University of Beirut. The UK was chosen – an option chosen by the medical team supervising the case of Sheikh Isa Qassim. This is due to the existence of a highly advanced hospital specializing in the treatment of the illness that Sheikh is suffering from.

Until Friday evening, the inner circle around Ayatollah Sheikh Isa Qassim described the situation as worrying since the options were not yet clear and were not yet settled. The Bahraini king's rush to facilitate the Sheikh's travel abroad, as revealed by the Bahraini foreign minister, also raised concerns among Bahrainis since the authorities are the only player in the entire process. The question was whether the Sheikh would be allowed to return to Bahrain, whose citizenship has been revoked due to the political crisis between the regime and the people.

With the medical diagnosis and the destination decided, there was nothing else to think about. The people close to the Sheikh saw that the priority was to stabilize Ayatollah Qassim’s health, and that everything else were marginal details. There were no guarantees from the regime. No communication regarding post-treatment arrangements was made. This is what those who are close to the Sheik stressed: the health of the Sheikh is their concern today.

"We assure the believers that the follow-up on His Eminence’s health is ongoing and continuous as needed, whether at home or abroad." With the option of treatment abroad being decided on Friday, the Bahrainis were shocked by the news.

People gathered in mosques for invocations and prayers. They took to the streets raising banners with slogans written on them “the assassination of a homeland”. This was how the Bahrainis redefined themselves. Their identities were linked to Sheikh Isa Qassim. This is how they wanted to point the finger at the criminal who obstructed the treatment of their homeland. Thus, their crisis with the regime remained open-ended. They wanted to say that the regime, which had imposed the house arrest, is the only one responsible if anything befalls the health of the "Sheikh the father".