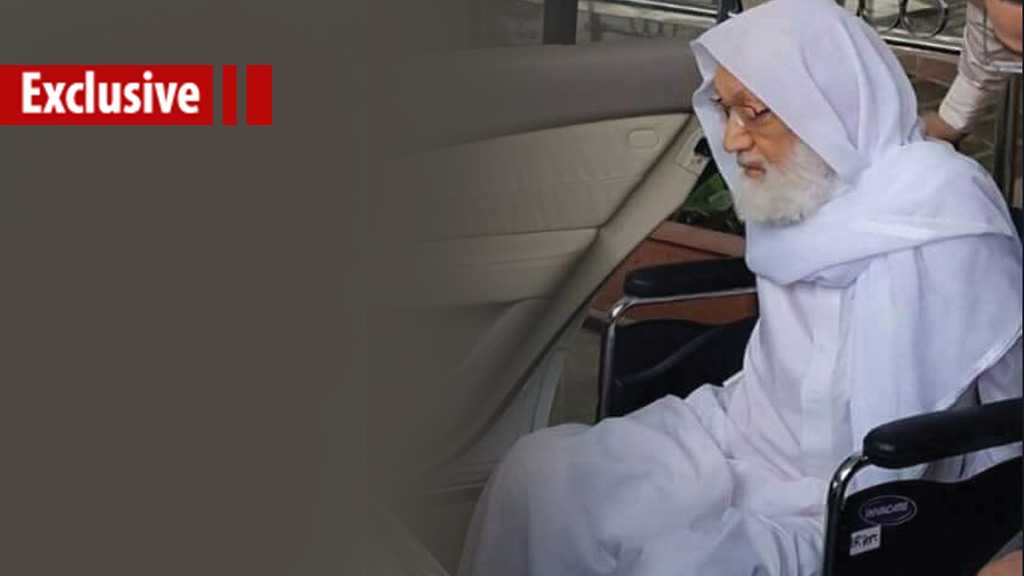 Since June 25, news of Ayatollah Sheikh Isa Qassim’s deteriorating health has been rocking the Bahraini street. For over a year, the highest religious authority in Bahrain has been subjected to a regime-imposed house arrest during which time the 80-year-old’s health has been gradually deteriorating. The authorities have been condemned and held accountable for placing the man under house arrest, which is impeding his treatment process. Yet the condemnation failed to force the authorities to back down from the war of abolition that it launched with regional support and US blessing.

Early on, Bahrain’s political space was open to various theses. But the Islamic trend has always been the inclination of the country’s majority. At various stages, Bahrain’s leading scholars maintained their stature among the public. Religious figures remained a safety valve in maintaining stability at home and a reference for the authority during crises. The homes of the country's leading scholars have always been a point of reference during important stages since the referendum on Bahrain’s independence [1970] and before, including the moment when the current king turned to the scholars to bless the referendum on the National Charter, which he himself quickly rescinded. A quick review must be made to explain some facets of the relationship between Ayatollah Qassim and a crowd that gathered in the squares surrounding his home in the most difficult circumstances to protect him from the hands of the regime. Under the title of "sacrifice", Bahrainis did not leave the arena. It cost them martyrs, wounded and detainees in the dozens before the regime could impose the house arrest on Sheikh Qassim.

The regime suffers from the Sheikh Isa Qassim complex, stirred by the power of the popular respect that he commands. Even the king himself was under this spell at one point, when he visited Ayatollah Qassim at the hospital and reassured him about his health. He did not leave before kissing his head [2009]. The ruler of Bahrain can no longer tolerate this fatherly power. He wanted to get rid of it, so he took advantage of the atmosphere of regional tension and the Saudi sponsorship that remained in place until al-Khalifa’s influence was consolidated in the country, disposing those fighting him for influence. Sheikh Qassim dominates the hearts of the Bahrainis, while the latter strangles them to rule with a fist, without succeeding in subjugating them.

The former descends from the Musali family, which was rooted in Bahrain centuries ago and preceded the arrival of the al-Khalifa clan as the conquerors of the country. Ayatollah Qassim is one of the fathers of the first Bahraini constitution. Meanwhile, Bahrainis recall all too well the latter’s revolt against the largest popular referendum by approving the 2002 constitution.

While the majority vote brought Sheikh Qassim to parliament, death appointed Hamad bin Issa as an heir to an emirate that was transformed into a kingdom during his rule. The reasons explaining the King’s and the ruling family’s complex of Sheikh Isa Qassim’s stature are just the tip of the iceberg. This complex is explained by what was revealed by Cambridge University researcher Salah al-Bandar in 2006, who served as a strategic planning consultant for the affairs of the Bahraini cabinet. Al-Bandar spoke about a formal Bahraini plan aimed at achieving a demographic change on a sectarian basis, by encircling Shiite figures and targeting them and displacing citizens only to be replaced by those who acquired the Bahraini citizenship through a systematic naturalization policy.

According to the plan, the regime’s elimination policies seemed clearer following the political crisis in 2011, and even after the revocation of Sheikh Isa Qassim’s citizenship in 2016 until the his health deteriorated recently.

After being transferred to the hospital recently, Ayatollah Qassim underwent a gastroscopy operation, the circle closest to him told al-Ahed Website. His initial tests showed that there were fractures in the pelvis and bruises that led to disabilities, necessitating the monitoring of his health and staying in the hospital. According to the sources, the fractures and bruises came as a result of a fall, which happened a while ago while Sheikh Qasim was moving through his house and after which he was not transferred to hospital.

"Water was pulled from the knees. Bleeding in his eyes was observed. His Eminence also underwent a number of accurate tests in more than one location. We are still waiting for the results," the Bahraini sources added.

According to the medical team's diagnosis, Sheikh Isa Qassim is still in the hospital for a thorough follow-up, surrounded by the military barricades and tight security procedures put in place by the authorities in the vicinity of Sheikh Qassim's house and impeding those who want to check up on him.

International human rights defender Sheikh Maytham al-Salman told Al-Ahed that the government of Bahrain bears full responsibility for the deterioration of Sheikh Isa Qassim's health, as it was "hindering the entrance of doctors, imposing a strict house arrest and preventing him from going to the hospital without prior permission from high-ranking officials."

Sheikh Salman stressed the need to "implement the recommendation of the UN Special Rapporteurs, which clearly demanded the immediate lifting of the house arrest, allow him to receive his right to treatment, without interference, control or accompaniment from the security authorities. And allow Ayatollah Isa Qassim to meet people without bans or harassment."

The Bahraini rights defender pointed to the mounting tension on the Bahraini street as a result of the news about the health situation of "the father of the sheikh" as the Bahrainis call him. Al-Salman says he is absolutely certain that "if the citizens were allowed to lift the siege imposed on Diraz and the imposed house arrest was lifted, tens of thousands of people would head to the house of Ayatollah Qassim today and the Sacrifice Square in front of his home would be a national shrine where people invoke to God and supplicate to him to heal this great national and religious symbol."

Even today, the Bahraini regime refuses to respond to more than one mediation initiated by Iraqi parties to lift the house arrest on the highest religious authority in the Gulf – the religious authorities the regime shamelessly targets with open regional support. The King cracks down, steps up targeting in a country where voices have been reverberating since the nineties and echoing: "We are with you, O scholars.”