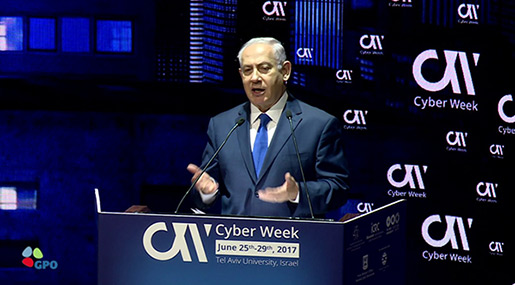 Speaking at the Cyber Week conference at Tel Aviv University, Netanyahu was only confirming what others have said, but it was the first time that the prime minister publicly admitted the scope of the threat to "Israeli" aviation.

Such hacking threats globally, "is not theoretical, but has already happened in the present."

Playing a mock video for the packed auditorium telling them that all of their financial information had been hacked and their trade secrets had been sent to their competitors, Netanyahu heavily emphasized the cyber threat to the country "in all the new areas" of technology.

However, at the same time, he said that the "Israeli" entity can succeed at the "ever-present race" of cyber and that "we are absolutely committed to protecting ourselves."

He mentioned that, "‘Israel' gets 20% of global investment in cyber security, punching 200 times above our weight."

Netanyahu said that he had purposely moved "Israeli" Occupation Force [IOF] unit 8200 (the "Israeli" NSA), cyber businesses and cyber academics to an area of Bir Seb'a [Beersheba] where they can work within 200 meters of each other.

The "Israeli" prime minister said that putting them all together "has tremendous advantages," adding that there were also risks to the move, but that he was "willing to take risks because cyber security grows through cooperation" and because of the major potential business gains.

Further, he said that the country "spends enormous amounts of money" on the Shin Bet, Mossad and other "Israeli" cyber intelligence capabilities, but that getting business to do a portion of the cyber defense investment could be a strategic budget bonus in saving from government spending on cyber defense.