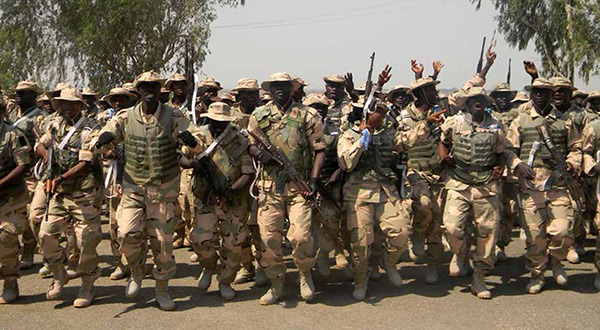 The Nigerian Army said on Saturday that its troops of 1 Division Garrison Nigerian Army Kaduna, deployed in ‘Operation Idon Raini' on Thursday 6 June 2018 while carrying out cordon and search at Dogon Dawa arrested one Abdulkadri Samaila a logistics supplier to bandits.

It said troops also arrested one Alhaji Yahaya who is also responsible for supplying some items to the terrorists.

"Similarly, troops also conducting raid operation at Sabonfilin village encountered some bandits. Three of the bandits were neutralized following a superior fire power from the troops. Items recovered include: 4 motorcycles, 4 handsets, and a substance suspected to be solution. Furthermore, troops also neutralized bandits who came to seize food items at Dogon Dawa during the market day.

"Items recovered include: 32 Motorcycles, 5 handsets and N9, 135 only. The Nigerian Army wishes to reiterate its commitment in protecting lives and property of the citizens at all times" he said.

In a similar vein, troops of Operation Lafiya Dole have been charged to deploy professionalism and basic military tactics to neutralize remnants of Boko Haram terrorists still hibernating within the theatre.

He stated that there is no doubt that Boko Haram terrorists has been degraded in terms of their strength, equipment capability and logistics platforms. He commended the Brigade for their doggedness in combating terrorism which he attributed to coordinated efforts, team spirit, dedication and loyalty.

He pointed out that, situation has changed hence the need to change tactics by remaining focus, motivated and confident in order to deny the remnant terrorists any means of sustenance.

He further charged the troops to be very professional to constantly revisit their battlefield craft, reinforce efforts on ambushes and sustain patrols, stressing that Boko Haram Terrorists is no longer a potent threat to the Nigeria nation.

He emphasized that, Boko Haram activities have been diminished to its lowest ebb, saying they are only in tactics of survival.

He urged the troops to be brave, enduring and persistence in order to checkmate the activities of these terrorists. General Biu implored the troops that, alertness is key to totally winning the battle and expressed delight with the efforts of the troops saying that he is proud to join the troops to conclude the war.