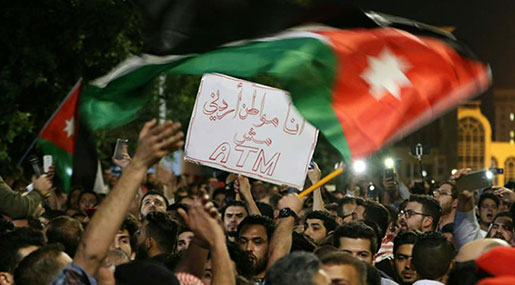 
Jordanian Prime Minister Hani Mulki submitted his resignation to King of Jordan Abdullah on Monday, according to an official source, to soothe widespread anger over economic policies that sparked the largest protests in several years and dozens of arrests.


Thousands of Jordanians took to the streets of the capital Amman and main provincial towns again on Sunday, extending days of protests that have shaken Jordan, a staunch US ally that has remained stable through years of turmoil in the region.

In this respect, police chief Major General Fadel al-Hamoud said security forces detained 60 people for breaking the law during the protests and 42 security force members had been injured, but protests remained under control.

Public anger has grown over the governmental policies since a steep general sales tax hike earlier this year and the abolition of bread subsidies, both measures driven by the International Monetary Fund.

Mulki, a business-friendly politician, was appointed in May 2016 and given the responsibility of reviving a sluggish economy and business sentiment hit by regional turmoil. The tax increases have caused his popularity to plummet.

The protests, the biggest in Jordan in years, widened on Saturday after Mulki refused to scrap a bill increasing personal and corporate taxes, saying it was up to parliament to decide.

Demonstrators who converged near the Cabinet office said they would disband only if the government rescinded the tax bill it sent to parliament last month.