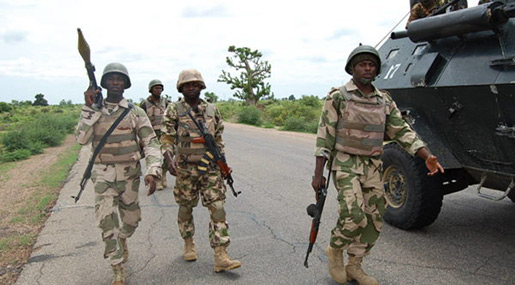 The Nigerian Army on Thursday said five soldiers died along the Pridang-Bita road in Borno after their vehicle stepped on Improvised Explosive Devices (IEDs).

The army spokesman, Texas Chukwu, said in a statement that the incident, which occurred in Gworza Local Government Area, happened when troops of 271 Task Force Battalion fought through an ambush staged by Boko Haram terrorists.

He, however, said that the troops killed a number of the terrorists, while others fled with gunshot wounds.

Chukwu also said that troops had rescued nine people held by the terrorists during a clearance operation in six villages in Borno.

According to the spokesman, those rescued include two aged men, two females and five children.

"They are currently receiving medical attention at the military facility and will be handed over to the appropriate authority soon," he said.

The army has been battling to defeat the Boko Haram, whose activities have caused about 100,000 deaths since 2009, according to the Borno government.

Efforts by security agencies have successfully limited the insurgents to the three North-eastern states of Adamawa, Borno and Yobe. In the past, the terror group carried out attacks and bombings in other parts of Northern Nigeria including Abuja and Kano.

Despite the military's efforts, the terror group is still able to carry out attacks in the three states on both civilian and military personnel.