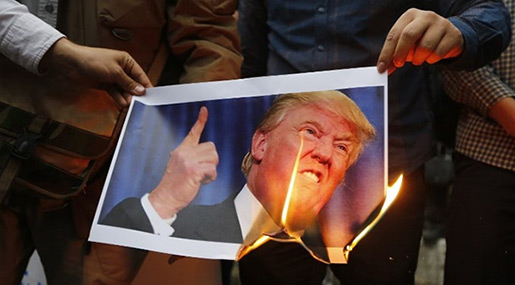 As the 40th anniversary of the Islamic Republic approaches, Washington's Captain Ahab-like obsession with Iran grows ever deeper. "Possessed by all the fallen angels", Ahab's chief mate could not shake his captain's fixation on The Whale.

Like Ahab, the unholy trinity of Donald Trump, John Bolton and Mike Pompeo relentlessly pursue their own Moby Dick.

Less than a year ago, in a speech to a gathering of the Western-funded Mujahideen-e-Khalq (MEK), a cult-like group formerly under the command and control of Saddam Hussein - a seemingly delusional Bolton claimed they would all celebrate together in Tehran before the end of this year and the 40th anniversary of the revolution.

More recently, a similarly deluded Pompeo delivered his 12 commandments to the Iranian people, warning Iranian men, women and children that the lord will impose not just "painful" sanctions, but also "the strongest sanctions in history". The US secretary of state, formerly Trump's CIA director, added that he would "crush" Iranian "operatives".

Whether Trump can outdo Barack Obama's various forms of barbarism - such as his "crippling sanctions", cultivation of extremists in Syria, drone wars, operations in Libya and imposition of hunger on Yemen - is open to question.

After all, there are few ways to objectively gauge the two, as Western media empires are apparently completely unaware that the US funding of Takfiri extremists, pushing a dirty civil war, land occupation and strikes against Syrian armed forces are all illegal and constitute crimes against humanity, according to international law.

Thus, it cannot be blamed for a collective failure to comprehend that the "Israeli" air strikes on Syria are also illegal. After all, this is not Lebanon, where Hezbollah "terrorists" successfully expelled the "Israeli" occupation force from their country after enemy combatants murdered up to 20,000 Lebanese and Palestinians.
The corporate media

It's understandable. After all, the region is so complex that Western media outlets think young Palestinians were shoved in the path of innocent "Israeli" bullets by their families, Hamas and Islamic Jihad. They assume that brown Palestinian people, like black South African people in the Sharpeville Massacre during apartheid, do not understand the value of life. "‘Israelis' Reflect on Gaza: 'I hope at least each bullet was justified'", ran a headline in the New York Times.

Perhaps, if Palestinians took their children to Disneyland, instead of lingering in the gloomy Gaza concentration camp, they would acquire an understanding of the civilized world along with its family values. Perhaps, if Ahed Tamimi wasn't such so spoilt and irrational and oriental, she would not have overreacted to the murder of friends and relatives by European colonialists.

Just because her 15-year-old cousin Mohammed was shot in the head by "Israeli" occupation forces, does not give her the right to slap a law-abiding occupation soldier. Indeed, she should consider herself lucky that she is not dark-haired, dark-skinned, or wearing a hijab, otherwise she would not have received any of the undeserved lukewarm sympathy from a few "bold reporters" in the corporate media.

It's understandable. After all, the region is so complex that Western media outlets think young Palestinians were shoved in the path of innocent "Israeli" bullets by their families, Hamas and Islamic Jihad.

Returning to Captain - he never got any higher up the military ladder, poor fellow - Pompeo's commandments, the seventh states that "Iran must respect the sovereignty of the Iraqi government". None are more qualified to pass judgment on issues linked to Iraqi sovereignty than the Americans.

After all, they did not interfere when Saddam gassed tens of thousands of his own people with the chemical weapons they gifted him. After "liberating" Iraq, with the blessing of the Iraqi people and international law, they took the best land in Baghdad and built a wonderful new city called the US embassy.

They strengthened the Iraqi judiciary by creating prisons such as Abu Ghraib... Sadly, most of the footage and photos have been lost, eerily similar to the experiences of the new CIA "glass-ceiling breaker" chief in Thailand.

In a strictly non-interventionist manner, the Americans also pursued a progressive policy of Don't Ask, Don't Tell when it came to the Saudi-funded al-Qaeda in Iraq, which later evolved into "ISIS" . After all, this was a family affair: "ISIS", al-Qaeda, the Taliban, Boko Haram and Saudi Arabia share the same religious textbooks and lofty ideological values.

Nevertheless, it is clear that the wicked Iranians will ignore the 12 commandments. The apartheid regime in Palestine and their democracy-loving moderate allies in Saudi Arabia will undoubtedly be delighted, even though the world will view them with unkindness, as needy and reckless cheerleaders for regional and global instability.

While there is always a surge of hope in the empire and its Persian-language mouthpieces when they see the faintest flicker of unrest in Iran, it seems pretty clear that ordinary Iranians, whom Trump seeks to lovingly strangle with his undersized hands, will remain decidedly ungrateful to the orange-hued authoritarian.

Instead of questioning the humanity of the threats coming from the White House and worrying about the fate of the innocent men, women and children who are being targeted, "enlightened" Western analysts seem more concerned with who "benefits" from such malevolent US policies in Iran.

When it comes to defending sovereignty and dignity, except for a small group of Western apologists, we are all more or less hardliners. The regime in Washington has already failed.