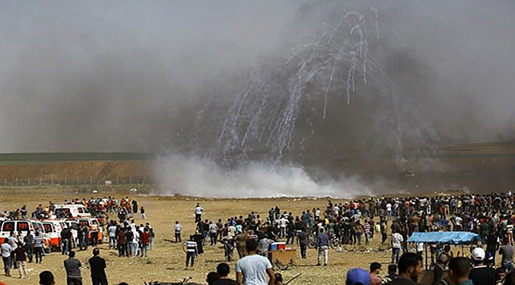 "Israeli" forces have once more opened fire on Palestinians taking part in anti-occupation protests along the border between the besieged Gaza Strip and occupied territories, martyring one civilian and injuring at least 170 others.

The martyred man identified as the 40-year-old Jabr Salem Abu Mustafa was protesting east of Khan Younis in southern Gaza on Friday, the Palestinian Health Ministry reported.
Palestinian medical workers said seven of those wounded were critically injured, including a 16-year-old teen who was shot in the face.

Friday's killings raised to 53 the death toll of unarmed Palestinian protesters who have lost their lives by "Israeli" occupation forces' live fire since protests began along the Gaza border on March 30. The "Israeli" apartheid regime has faced international criticism over its use of live fire.

The Palestinian rallies, known as the "Great March of Return," will last until May 15, coinciding with the 70th anniversary of Nakba Day (Day of Catastrophe), when the "Israeli" entity was created. Every year on May 15, Palestinians all over the world hold demonstrations to commemorate the day, which marks the anniversary of the forcible eviction of hundreds of thousands of Palestinians from their homeland by "Israelis" in 1948.

According to witnesses, "Israeli" troops used a drone to down flaming kites that demonstrators flew over the border in a bid to torch bushes and distract snipers.

Citing data from the Palestinian Ministry of Health in Gaza, the aid charity Save the Children reported on Friday that at least 250 Gazan children had been shot with live ammunition during the protests, among around 700 children wounded overall.

During the Friday protests, senior Hamas leader Ismail Haniyeh said Palestinians on Monday and Tuesday, when the mass protests are due to climax, will stand "as one man to tell the American president and ‘Israel' that al-Quds is Arab, Islamic, no one will change its identity."

Last December, US President Donald Trump announced his decision to recognize al-Quds [Jerusalem] as the entity's so-called capital and relocate the US embassy from Tel Aviv to the occupied al-Quds, breaking with decades of American policy.

His decision infuriated the Palestinians, who declared that Washington could no longer play a role as a mediator in the so-called Middle East peace process. It also sparked outrage across the Muslim world and even among Washington's Arab allies.

On December 21, the United Nations General Assembly overwhelmingly voted in favor of a resolution that calls on the US to withdraw its controversial recognition of al-Quds as the so-called "Israeli" "capital."

The "Israeli" entity has launched several wars on the Palestinian coastal sliver, the last of which began in early July 2014. The military aggression, which ended on August 26, 2014, martyred nearly 2,200 Palestinians. Over 11,100 others were also wounded in the war.

The Gaza Strip has been under an "Israeli" siege since June 2007. The blockade has caused a decline in living standards as well as unprecedented unemployment and poverty.